I'm trying to make a railroad of some sort, but i've just hit a wall. When trying to use the array modifier on the object group, I couldn't find it.

I'm linking my objects between different blender files to keep modifying possibilities. And I'm grouping them so I don't have to apply a modifier to 15 different objects.

I can't join the objects, because that messes up my materials. And i've tried to make them parents, but that wouldn't follow from the source blender file to the parent file when dynamic linking.

Is there a way I can make an array of the group follow the curve or a way to link/join/group my objects together while keeping my materials and editing possibility so that I can use the modifiers a single object?

I hope that my problem is clear, Thanks !

Above are 10 separate objects plus a red square. 10 duplicator objects have [Curve Modifier]. The 10 numbers are parented separately to a duplicator objects. Duplicators 1-9 have one child. The 0 duplicator has 2 children the zero and the red square. For this small example the benefits of repeating elements is not very strong. Carefully planned object heirachy duplication or small Python scripts can make the creation more efficient. 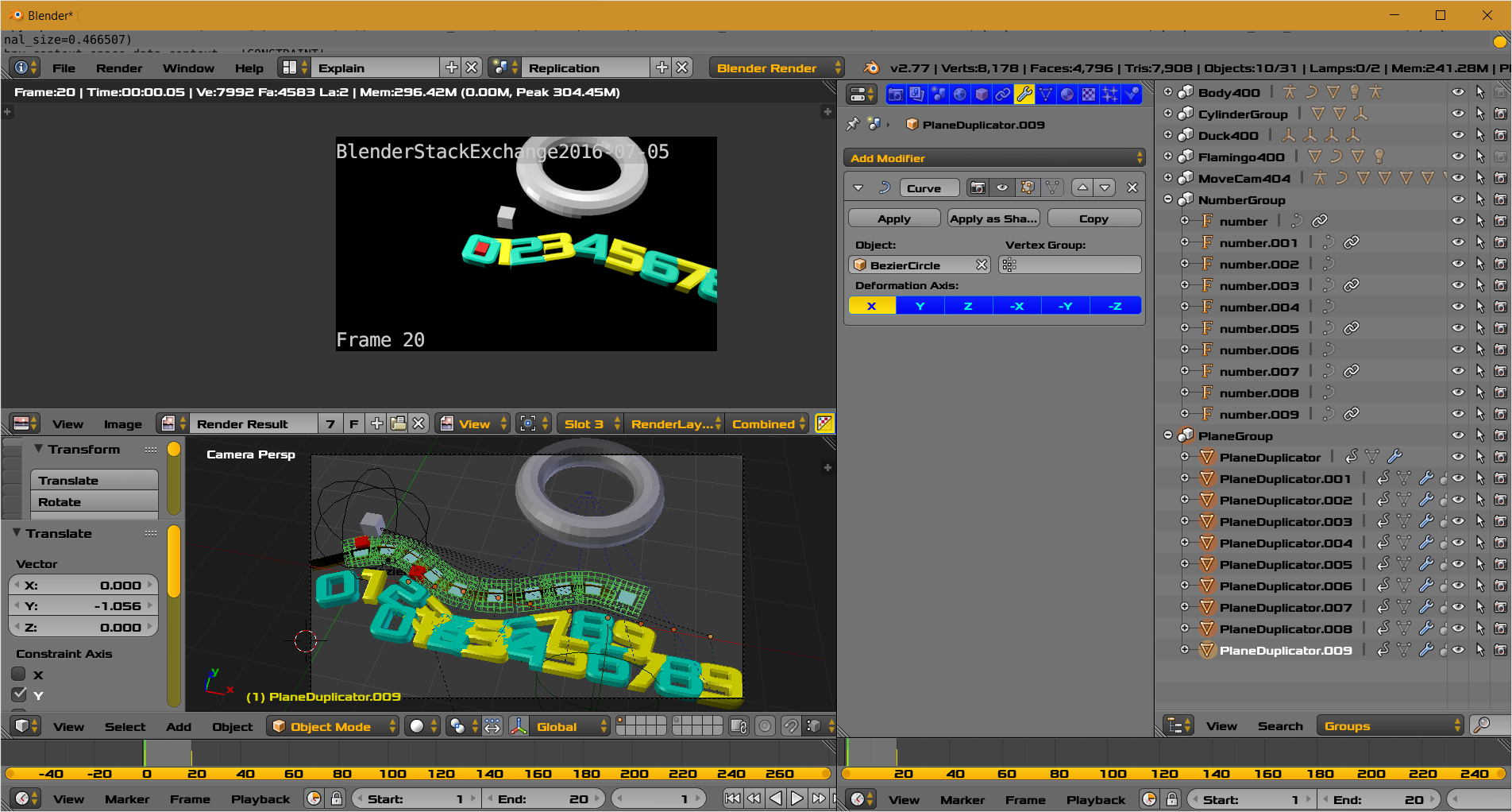 The zero and red square are parented to the same object which are meant to represent a small child parent one level hierarchy.Further hierarchy has not been explored.

The jump is a mistake in the GIF production by GIMP. The gray ring shows scale. The gray square indicated movement in the x direction. 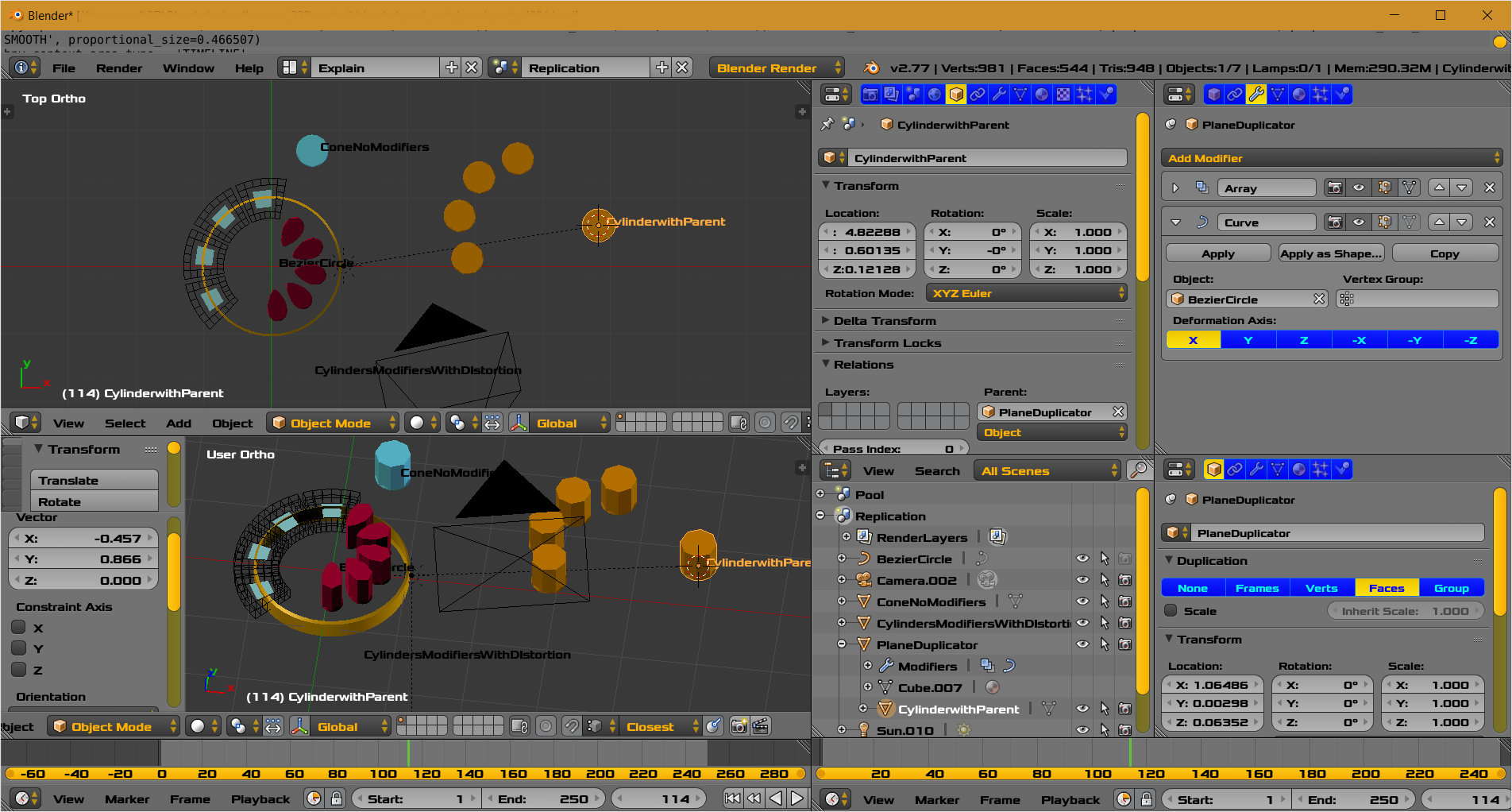 The yellow child cylinders have been duplicated by the parent object, the light blue planes. The circular curve is a simple track. The yellow cylinders have retained original shape, no deformation. Click to see larger image above. Note that some of the info has been pinned locked with the push pin icon, to achieve more information on one screen capture.

Typically a composed train object has parent object. The train parent object can be parented to a plane duplicator. You have included no images in your question so it has an mysterious quality to it. Lets guess that a train hierarchy has many cars and a car has many component Blender Objects. Each duplicator face can control a train car indirectly via parenting. A small Python script may help in this regard. One suggestion is to use many duplicator objects on the same curve.

The curve modifier introduces shape changes, or deformation, so you must use another technique to control that if desired. This can be viewed as good or bad. The light blue planes and red cylinder both have [Array Modifier] and [Curve Modifier]. The [PlaneDuplicator] modifiers are show above. The red cylinders look like seeds as the [Curve Modifier] deformation was intentionally shown to a large degree to emphasize a potential problem. Note the blue [PlaneDuplictor] objects have been deformed to a lesser degree into trapezoids.

Parent Child relationship plays the major role in Duplicator panel. The parent duplicates the children. The reverse might seem odd.

The duplication panel for the [PlaneDuplicator] is shown which indicates to duplicate the children objects on [Faces], in this case only a single face is present.

Note the parent is deformed. The duplicated children are not deformed.

Constraints can be copied by menu. Press [space] in the 3DView Window and type [copy] to begin matching. The regular menu has this option.

Note that there is not necessarily 100% coordination between the offset value in the [Follow Path Constraint] and the spacing you may need.

Not the answer you're looking for? Browse other questions tagged modifiers linked-data parent groups or ask your own question.

6
How can I move a group along a path?
1
Make an array follow curve in the BGE
0
how to array with 2 group objects
0
Real-time symmetrical modeling with distinct objects in Blender
1
How to add a modifier to a collection(group? linked objects? IDK) which it has modifiers inside