How Can I Deform a Cloth During Simulation?

I'm trying to figure out what techniques there are for controlling/manipulating/deforming a cloth during cloth simulation. Specifically, I'm trying to mimic the effect of a woman "hitching up" her skirt before kneeling down (otherwise, her heel gets caught on the bottom hem): 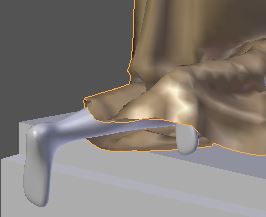 I'm sure this sort of thing must be done a lot in practice. I just can't figure out how.

Here's are the possibilities I can think of for doing this:

Is there some clever use of the above that I'm not seeing, or is the answer something completely different?

Use a hook modifier with pinned vertices.

First, add the vertices you want to use to move the clot up to the same group as your other pinned verts (the ones that hold the cloth at the waist).

Now you need to add a hook object like an Empty in the region you want the cloth to move.

To your cloth add a hook modifier. Select the hook empty and the pinned vertex group. Set the radius to something small so it doesnt interfere with the sim until you need it to. Make sure the hook is above the cloth modifier in the stack.

Once it gets to the point where you need to manipulate the cloth, move the empty and the vertex group will be "pulled" alongside the empty.

The only problem with the accepted answer is that the hooked vertices stay pinned, as discussed in the comments. Even if the hook modifier is turned off, they won't return to "simulator control". The answerer suggests dividing the animation into separate scenes.

Here's another way around it, although it requires manual intervention; if I could find a way to do this with drivers or some-such, it would solve the whole problem.

This assumes that a "hook" has been added as described in the answer. It also assumes that the hook is active at the start of simulation and turned off later.

Note that this is easily (albeit tediously) extendable to multiple hooks.

Not the answer you're looking for? Browse other questions tagged animation cloth-simulation or ask your own question.

4
Cloth sim not obeying hooks
3
Pin cloth vertices at a specific set of frames, and un-pin otherwise (in python)
1
Items on top of cloth, and dragging the cloth to move those items [blend files attached]
0
How to animate a character handling (i.e. picking up and letting go of) cloth?

2
Cloth simulation staying in plane
2
Is it possible to mimic the 'pin' operation in only one axis
4
How to achieve dynamic cloth pinning?
8
Workflow: Cloth simulation without disabling armature
1
How to get cloth + wind simulation in 2.80?