Flat quads (or, why is my mesh so funky?)

I think my question relates to a fundamental of 3D modeling that I haven't picked up on yet. It's very simple:

Let's say I have a flat quad. A plane on the XY plane inserted into am empty blender file is a great example. Now let's say I start moving each of the 4 vertices around on in any direction, especially the Z axis.

At this point, there would still be one face, but its extremely unlikely that the face would be planar (I just learned this word). So blender does its best to make sense of what this should look like.

The problem I'm having is that it seems like my quads are always like this, but they never look the way I want. There are edges and seams that look like they are dangling in space, and what tends to happen is that my mesh looks great when viewed from most angles, but if you look at it from just the right angle, you notice the dangling edges or sometimes even some kind of impossible geometry. And so I might try to nudge the problematic vertices around, but this often seems to either make it worse, or just hide the bad geometry until you see it from a different angle.

For me, this always seems to happen whenever I'm trying to move vertices to add roundness to something that is originally square.

There is another question on here about how to actually flatten the quads. That's great, and I might use some of the techniques mentioned there. My question is:

EDIT Here is an illustration: 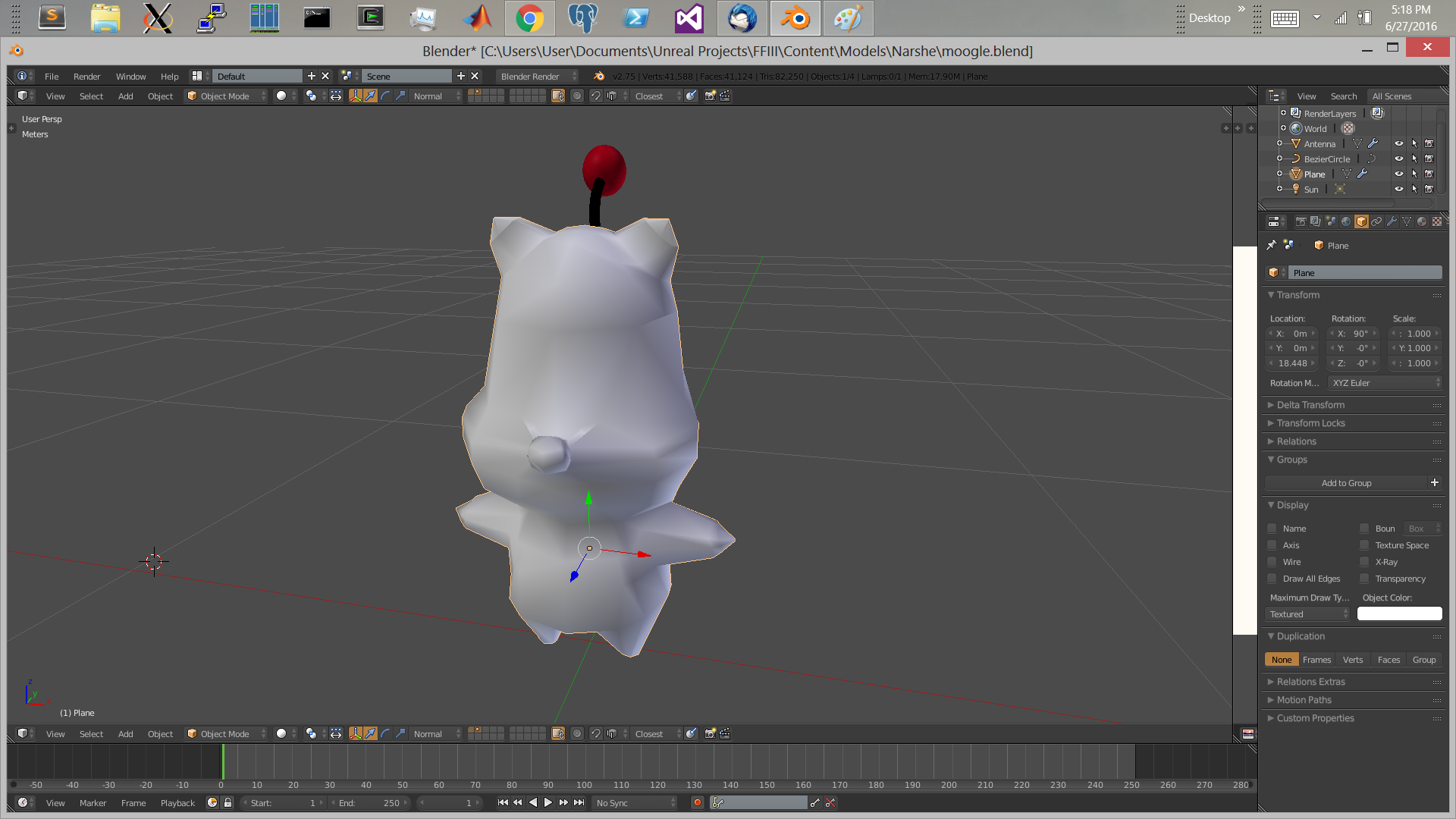 But if you get closer and look from a certain angle... 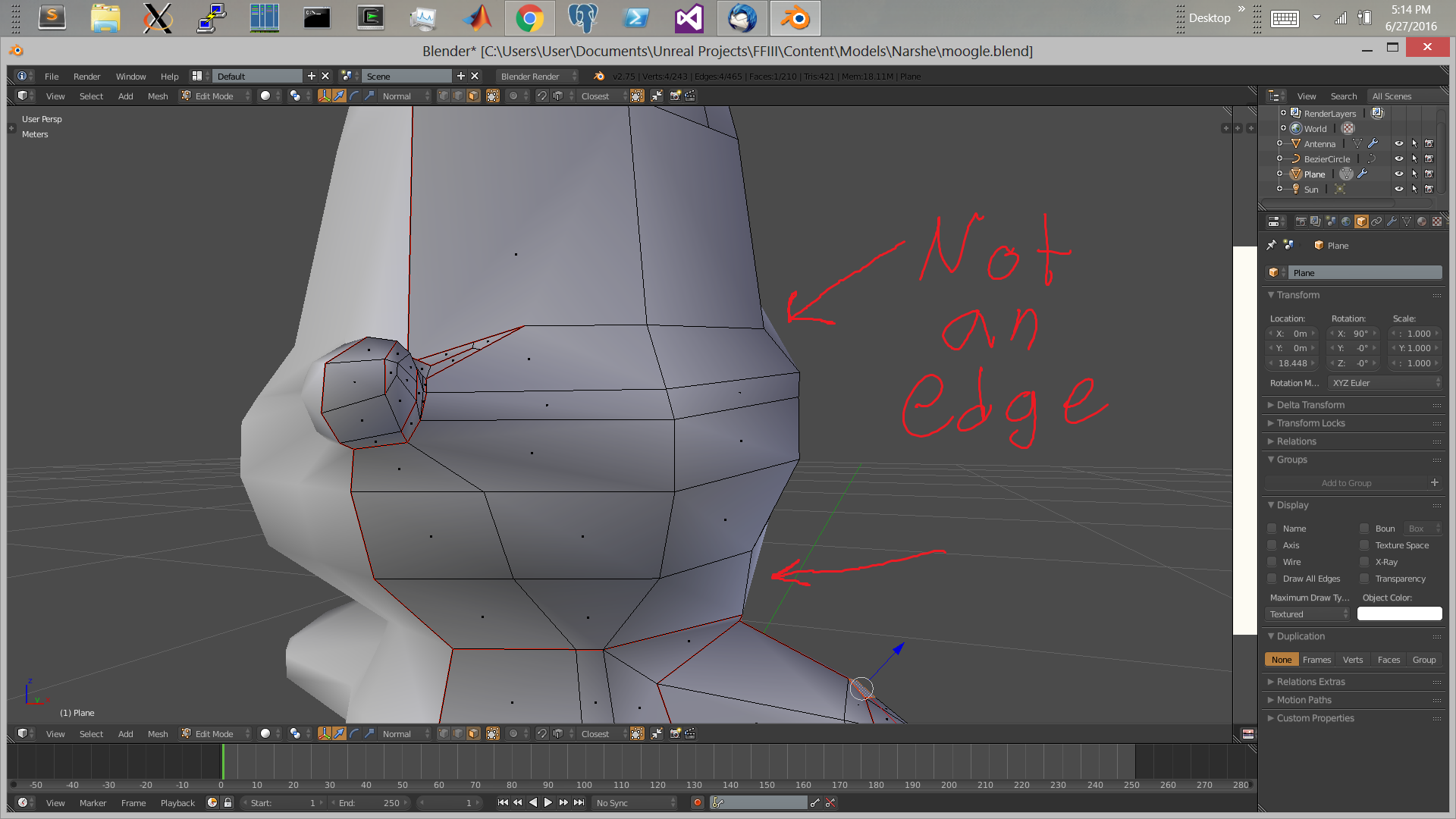 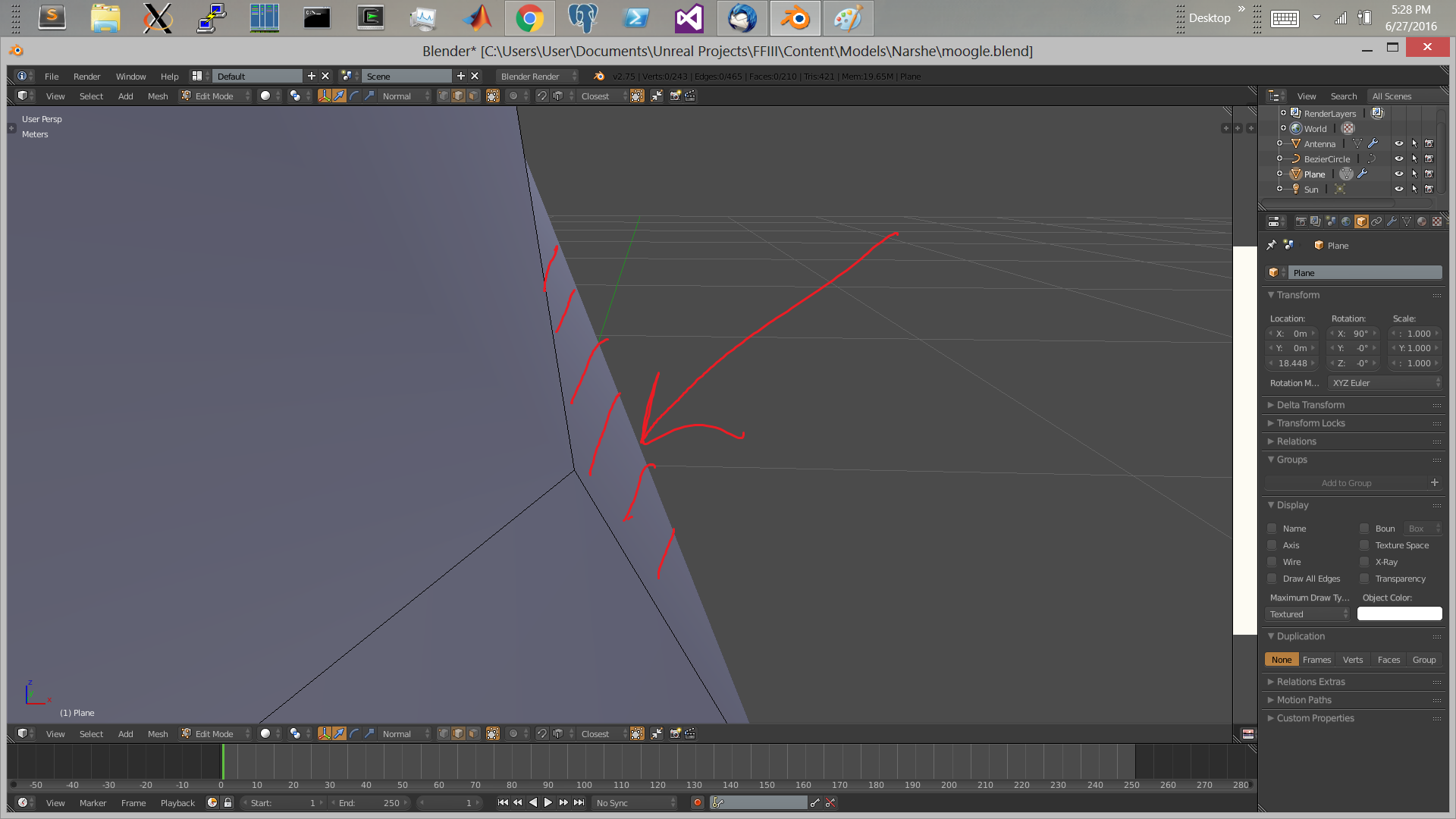 The "edge" that is pointed to by the arrow is not actually an edge, but some kind of artifact created when blender tries to show the quad. The way the vertices are positioned, it shouldn't actually be possible to see the sliver of the face that I marked in red, since this face is supposed to be around the corner from the edges. The edges should form the silhouette on the right side of my figure. 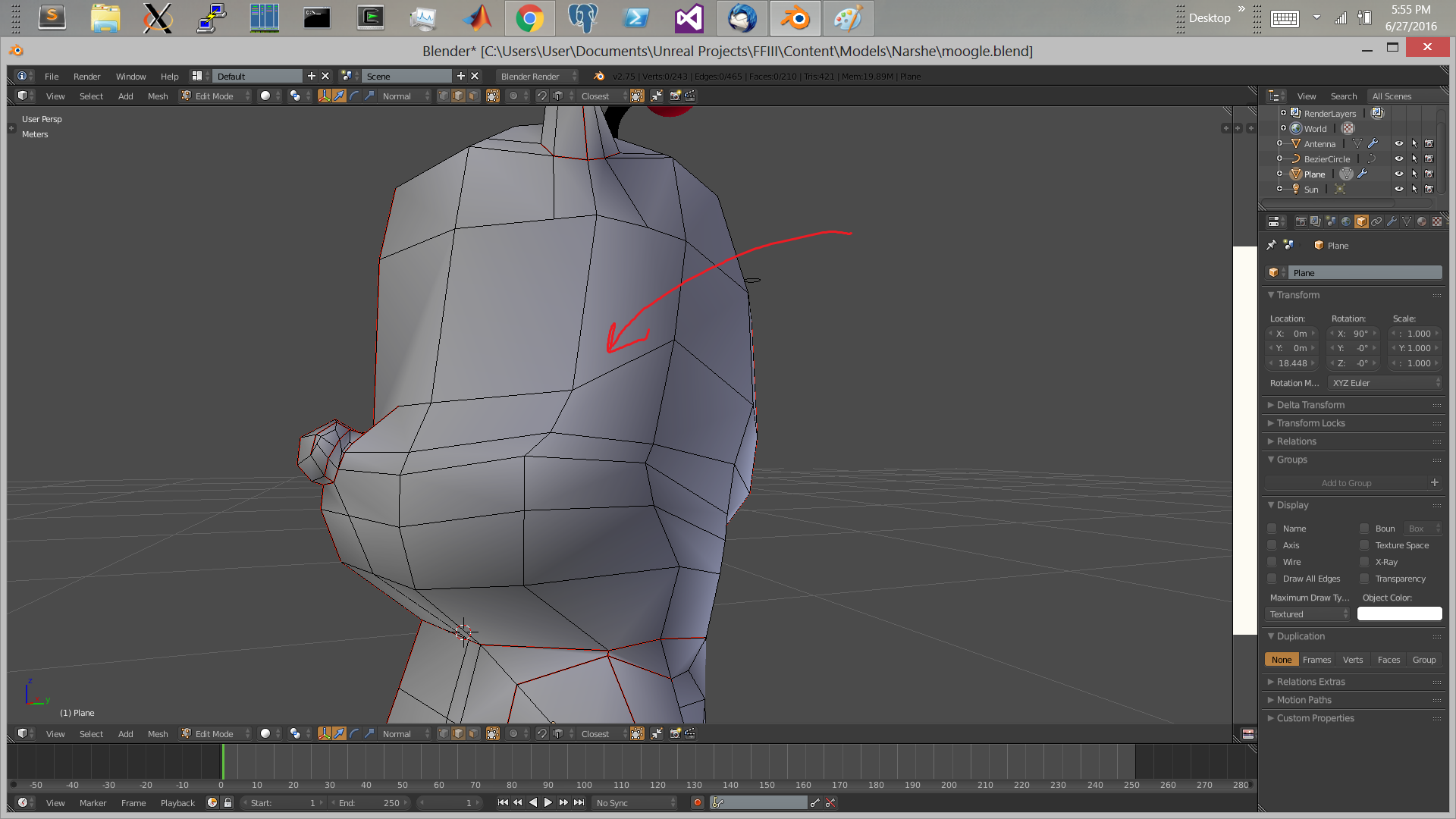 Here is the side view. Maybe it is the angled topology that skews the face in a funny way?

But I'm not looking for help with this one particular issue, but rather a better understanding of why this happens, and ideas to prevent this in future models.

As you already suspect, in three-dimensional digital graphics computer basically only know how to draw two things: Lines and Triangles

There are a few other primitives types (point clouds, volumes, voxels etc.) but for the sake of simplicity lets focus on the former two.

Historically speaking, in the first 3D modelling software you could only model with triangle based geometry, because it's the only unequivocally definable 3D structure with three points. Even Blender itself a few years ago as of versions pre 2.63 (when BMesh geometry engine was introduces) was still only able to define faces with 3 or 4 sides, not more.

As technology evolved it started being practical to define faces with more than three sides.

A quad, as you correctly stated is not unequivocally defined by those four points, it is not however mathematically undefined. Since computers only know how to draw triangles, in the background the software is trying to silently decompose the shapes into drawable primitives, triangulating the shapes for you as best as it can, as you can see bellow.

Simple shapes are trivial, but more complex shapes (when supported by the software) are more difficult to triangulate, and may often generate artifacts or undesirable results from unexpected or uncontrollaed tessellation. That is one of the reasons why you will often hear people say you should strive to have a quad dominant topology, or at least avoid NGons.

Blender doesn't explicitly allow tessellation control by the user, but other software or mesh engines some times have tools that allow manually controlling how a shape is triangulated (as is the case of 3DSMax which allows users to adjust triangulation for 3D Poly objects, but not possible for 3D Meshes).

TL;DR Should you be worried by this? No, not in most cases.

This is normal behaviour and non-planar shapes are totally expected (if not the norm) everywhere in your mesh. Modelling with planar faces everywhere would be difficult and time consuming, and certain shapes would be hard if not downright impossible to achieve.

Some extreme cases can some times cause issues and should be avoided though, like 2D concave planar faces, or very high distortion quads, but most others occurrences should be fine.

If you are experiencing issues, there are builtin tools in Blender to help deal with these, like the Mesh > Cleanup > Make Planar Faces, to help flatten faces where issues might occur.

What you seem to be missing is the concept of subdivision. Except for hard-edge models or Low-Poly artsyle, most organic shapes are frequently modelled using a Subdivide Modifier, that will take care of automatically smoothing your surfaces. It will soften your geometry angles, while retaining a simple enough base mesh to work with, so that quads appear to have a smoother appearance.

I think the issue is best described as - blender does not draw concave quads accurately.

This is similar to the extra edge that you see coming from behind your model, the quad located just behind the visible faces is getting deformed inwards giving you the extra bit.

This mostly comes from the fact that a quad is turned into two triangles for drawing, while the method used is stable (and faster), it is not always the best way. If we deform the same quad as above but on opposite diagonals we get a better result showing that the quad is always split between the same vertices.

As per Mr Zak's comment, You need to add more quads in your geometry.

IN EDIT MODE - Do one of the following:

To get the extra geometry needed I would recommend using loop cuts Ctrl+R, then hover your mouse over the mid-point of one of your edges.

Once you get a highlighted loop, you can either specify the number of loops you want to equally divide it into that number of cuts, or alternatively you can scroll your mouse wheel up and down until you are satisfied. I would probably at least do this in two directions, if not all three (if needed).

As an alternative to this, you can just use the subdivide command W>>S. To do this make sure your whole object is selected (every face otherwise your geometry is prone to getting even more out of control) then type W then hit S. Repeat this until you are satisfied.

0
Faces get distorted when scaled or moved
1
Blender subdividing faces and creating edges where shouldn't be any
1
My quad looks like two triangles
0
Subsurface modifier problem in blender
1
Quads acting like triangles?
0
Blender Non-Planar geometry meaning
0
Should I be concerned about non planar quads like these if I'm modeling for unity?
1
Acceptable flatness limits for quads
0
Topology 'dents'
1
Is there a name for a mesh has 4 vertices that is not flat
See more linked questions

11
Long rectangular quads? Or neat squarish quads with tris?
7
Triangles to Quads Problem
2
Any tips for simplifying CAD models?
4
Optimizing Mesh to Quads only
0
Can I model with in a mode where quads are all planar?
1
Cut off subsurf supporting geometry only using quads
0
Quads display differently on the two sides of an otherwise symmetrical object