Creating UV maps for my dragon

How large should my UV maps be? I want to export my model into UE4 game engine. I also want to add that my model is separated into three objects - head parts (eyelids, eyeball, pupil, headbones), the body and the wings.

Should I add all the parts of my model to same UV map?

Here are the pictures of my model and then the UV map of the part of my model. 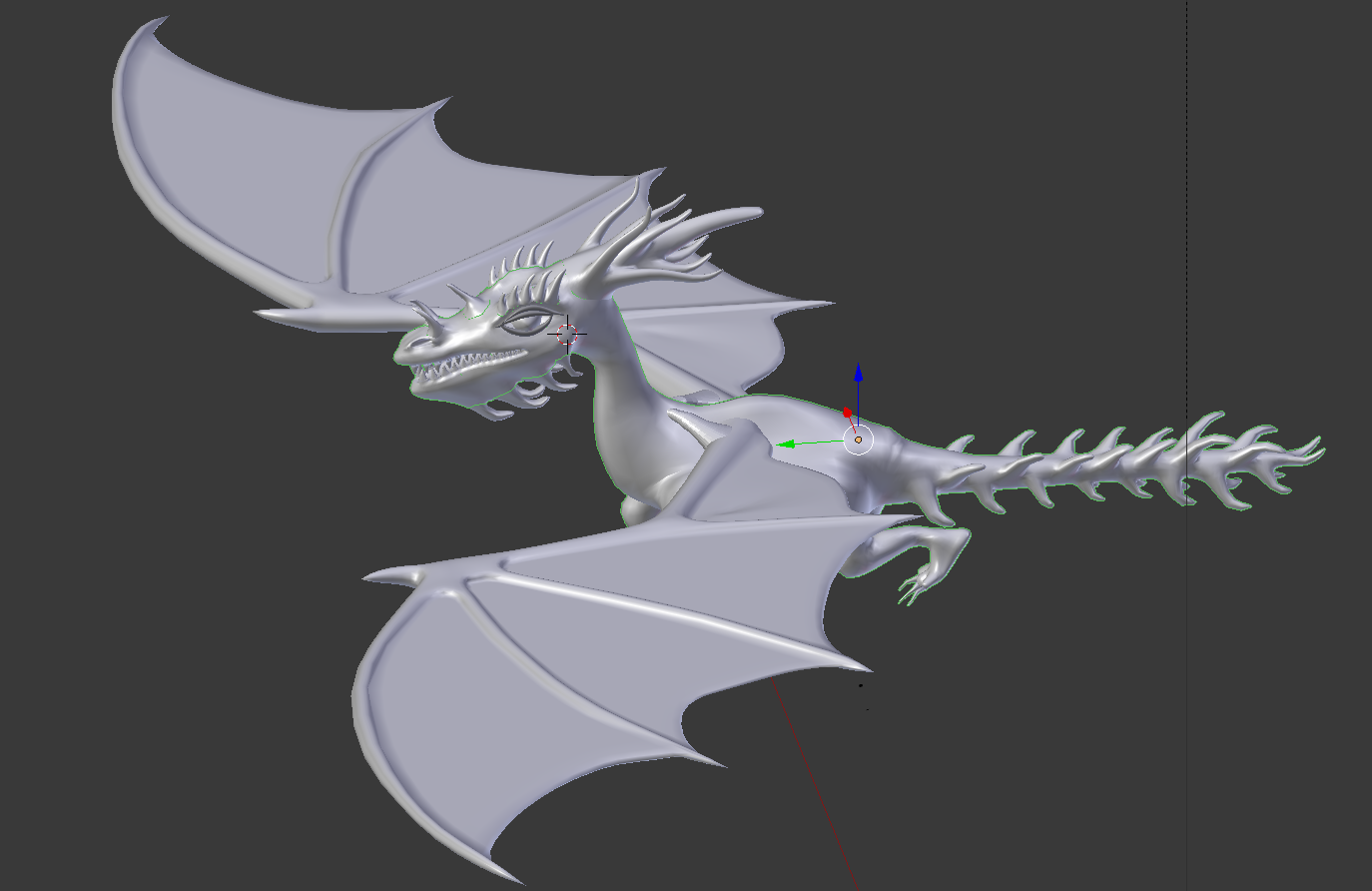 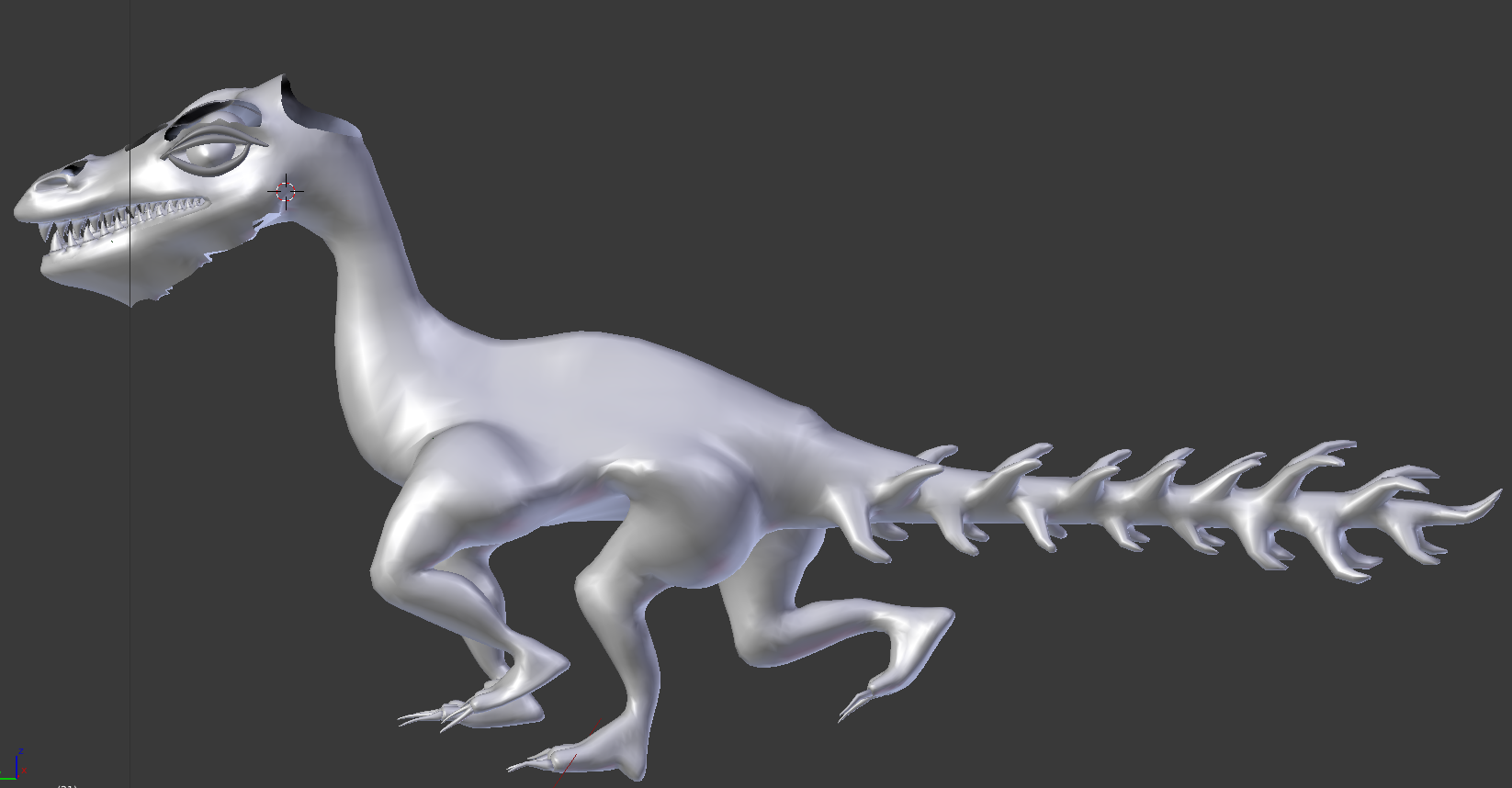 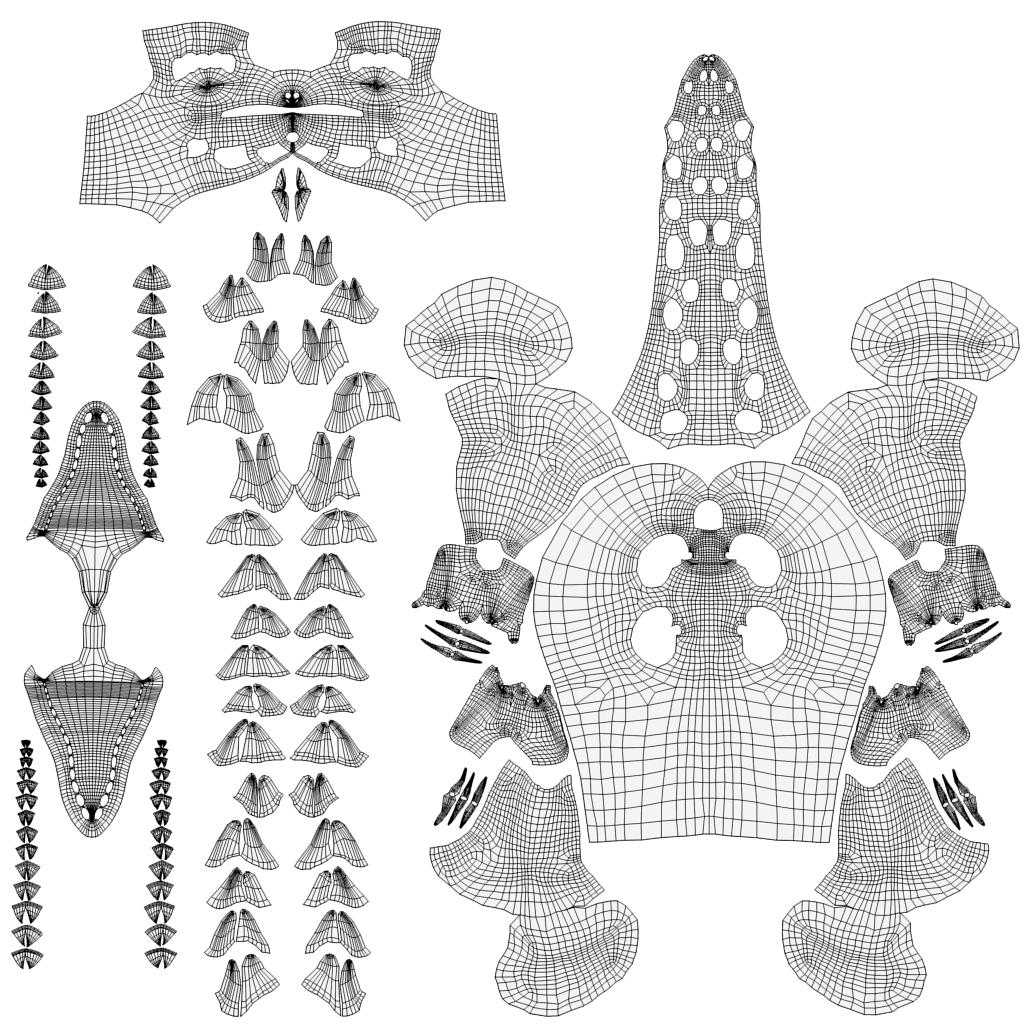 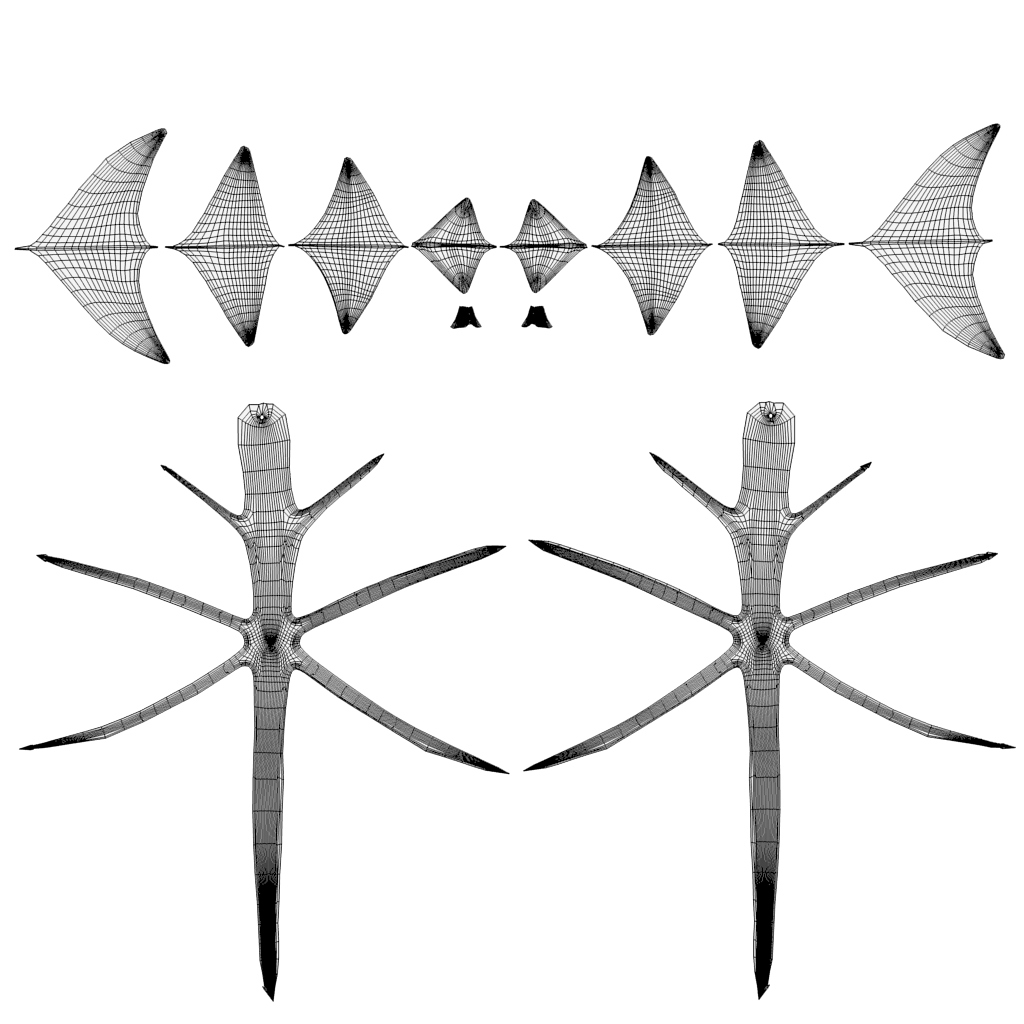 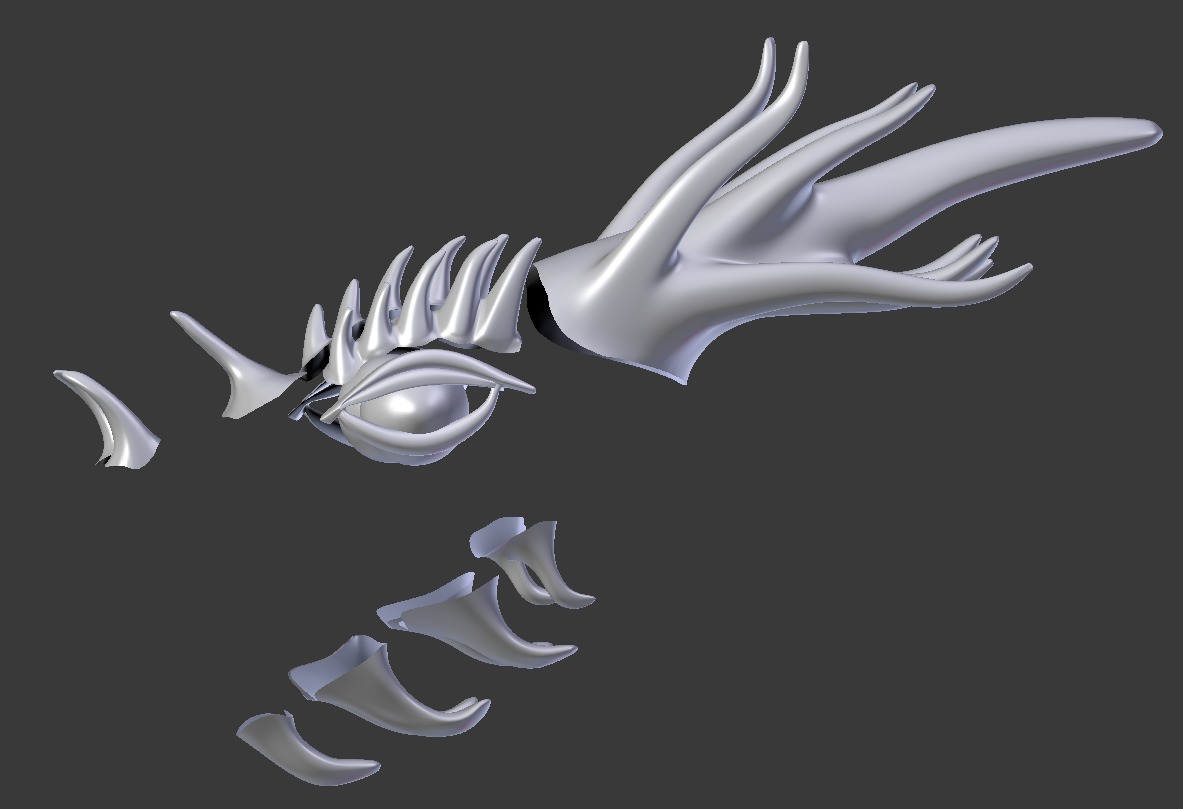 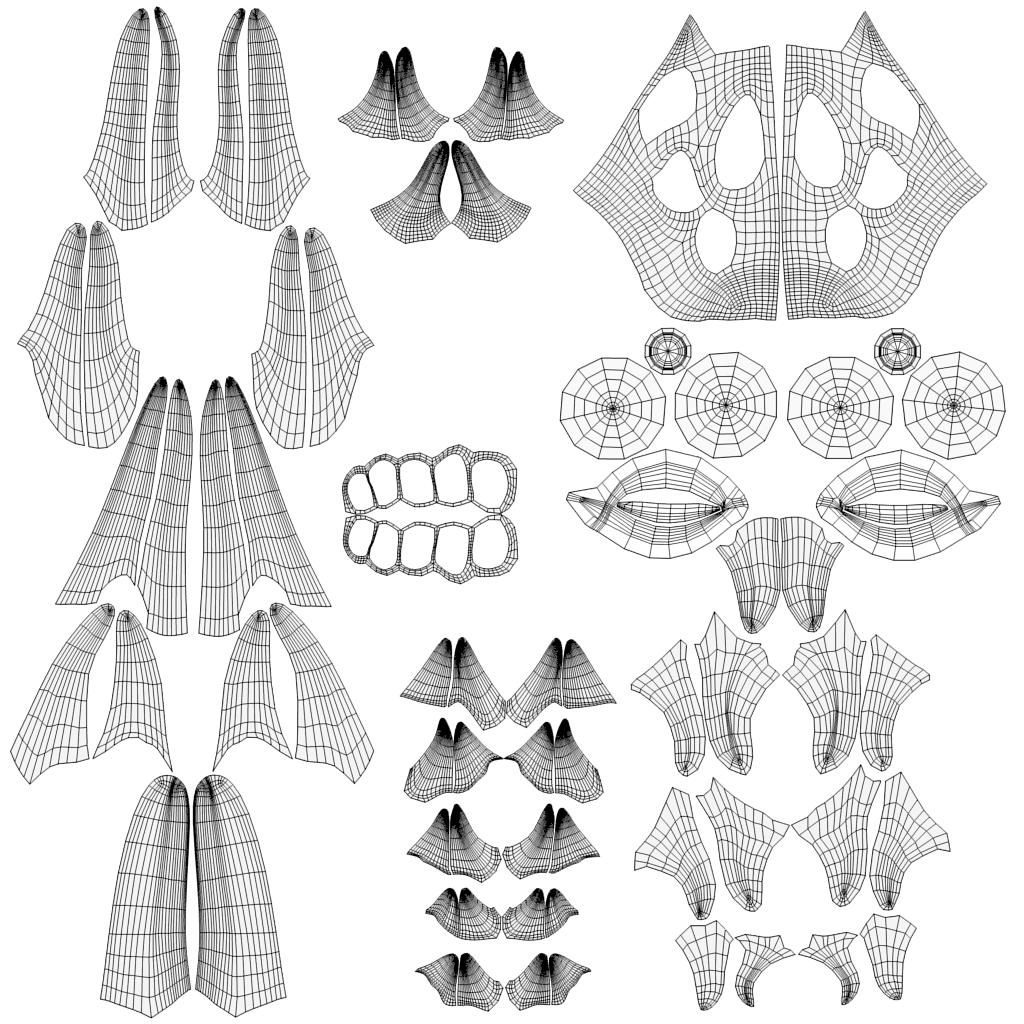 What matters is the number of textures you will use (generally one per UV map), the size of them and the way you use these textures in "an optimal way" (so that the less part of them is useless).

Have you tried the "smart uv project" option when uv unwrapping ? If you do (make a copy before trying that), you'll see that the uv map is cut into plenty of small parts. The aim of that is to optimize the useful space of the textures while keeping the relative surfaces of the faces. So for instance, if you look at your wings UV map, you can see that there is plenty of space in the texture that is not useful. So for a same texture size, the actual resolution for the wings will be lower with your UV map than it can be with the "smart uv project" option. The counterpart of that is you cannot (or hardly) paint directly on such a texture. But you can do both : keep your UV map, use it in Blender with a big texture size, then bake on another "smart UV project" uv map with a lower texture size.

To summarize : all in red here is lost surface 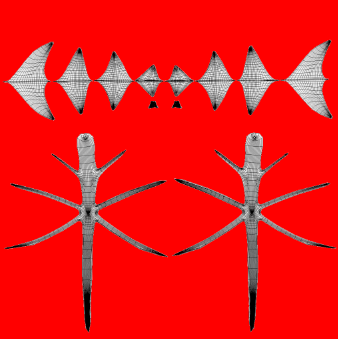 For the textures, you can use a mipmap technics : the idea is to define several textures for the same UV map. The first texture is the full resolution (let say 1024, for instance) and is applied when the camera is very close to the model, the second texture is half resolution (ie. 512) and is shown when the cam is at some distance, the next texture is smaller again (ie. 256) and is used when the model is very far. Probably UE has built in functions to do that automatically.

Also the polycount of your mesh is important if you want to use it in a game. I cant be sure of a number for that (as computers are faster and faster) but for a main character around 20k tris is more or less a limit, generally. But there is no rules as all depends of what you want to do in your project.

A last remark : imagine that in your game in UE, you want the colors of the eyes change (let's say depending on the dragon's mood), probably you'll need to set the eyes on a separate texture to do that as if not you'll need to change also the texture for all the head.

Your question can not be answered that easily.

You have to know what amount of quality you want to achieve. For example the dragons from Game of Thrones are using 120 Udims (UV Maps). But for an game engine 1-3 Maps are enough.

The easiest way is by only using 1 UV map. This way you make sure that everything is scaled the same way. Because you dont want that some parts of the texture look more squishy than others.

If you want to use more than one, i would say you take one for the body and one for the wings with the head parts. but be aware that you have to arrange the wings manually in the uv editor, because blenders auto pack does not handle them very well. you want as less empty space as possible on your uv map!

As a resolution i think 2k or 4k will be enough. even for a single uv layout. also more than 4k does not run very smoothly in game engines.

3
Multiple UV maps — One UV map always low res or missing
0
Transfer UV maps or Join as UVs?
0
UV Maps not showing in render
1
How do I bake multiple texture maps into 1 UV, In Blender Cycles?
1
Identifying and correctly mapping various texture maps onto a model (Blender Cycles Render)
0
Having issues baking normal maps for this small pot, how can I fix it?