How do I restrict scaling to a specific axis? [duplicate]

Im new to Blender but have some experience with 3dsmax. In blender, when i select some polys and try to scale them, i have no control on the amount and especially relative axis on which the scale would happen, where as with 3ds max i could scale restricted to x, y, z or any combination of using the handy widget. Is there a way to replicate this, or to get any control over the scale ?

Yes there is a way to do it.

During the scale S :

And after you have confirmed your scale, you still have the operator panel in the bottom left part of the view : 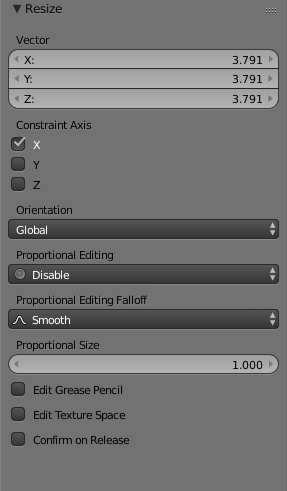 It's not currently possible, with the widget alone.

It's a know limitation of the current widget system and it is being worked on. There is a live project Wiggly Widgets focused on bringing Blender's widget system to the 21st century but when it will be ready is not know.

In the meantime use hotkeys instead which is where blender excels the most. Press S to initiate the scale operator, and then press X, Y or Z to select axis. During this phase you can also introduce a value for scaling with the keyboard for precise measurements or even simple math expressions.

For two axis scaling press instead Shift + X, Shift + Y or Shift + Z to exclude that respective axis and scale in the other two directions.

21
Constrain to any 2 axes during transform?
1
Decrease an object with values