Why can't objects in Edit Mode have their own name?

I've searched so long for the answer and all I ever see is the typical "press ctr + j to join objects, switch to Edit mode, and edit as one mesh", or "make duplicates", or "download the MultiEdit addon", etc.

But even as an 'advanced newbie' I already figured out how to edit several objects in Edit mode, but the problem is, they all share the ONE and SAME NAME.

Object mode assigns each object it's own name - but not in Edit mode.

Is this just the way Blender works? Does it not allow you to add objects with their own name (in Edit mode)?

Thanks SO much for this (possibly) over-obvious answer!!

Basically the confusion comes from the fact that you can Add a Mesh in Object Mode and Edit mode, but they are not the same.

So what is the difference?

When you add an mesh in Object Mode you are creating both, a mesh and an object. Objects created in object mode are independent of each other, meaning that they will be named with a unique name and will all have their own separate origin (or pivot point), and can be transformed independently.

As an example: Two objects created in object mode show as different objects in the outliner.

Meshes created in Edit Mode are part of the Active object, an already existing object that is being edited.

In this example, the monkey's mesh becomes part of the object called Cube and does not show in the outliner.

Objects can contain one or many meshes, connected or not.

All meshes within that object will share a common origin and will behave as what they are: a single object, meaning they will move, rotate and resize together when transformed in Object Mode.

To answer the question:

Objects must have unique names (blender will not allow the exact same name for different objects). Meshes within an object cannot have a name.

If you need to differentiate parts of an object, you can create vertex groups. Vertex groups can be named, but they will still be part of the same larger object that encloses them and cannot be selected directly in object mode.

To separate parts of a mesh and turn them into a new independent objects (with their own unique name and pivot point) you use the separate function (pressing P) and choosing if you want to separate by selection, unconnected parts or materials.

You cannot give name for objects in edit mode, however you can assign a number of vertices to a vertex group. 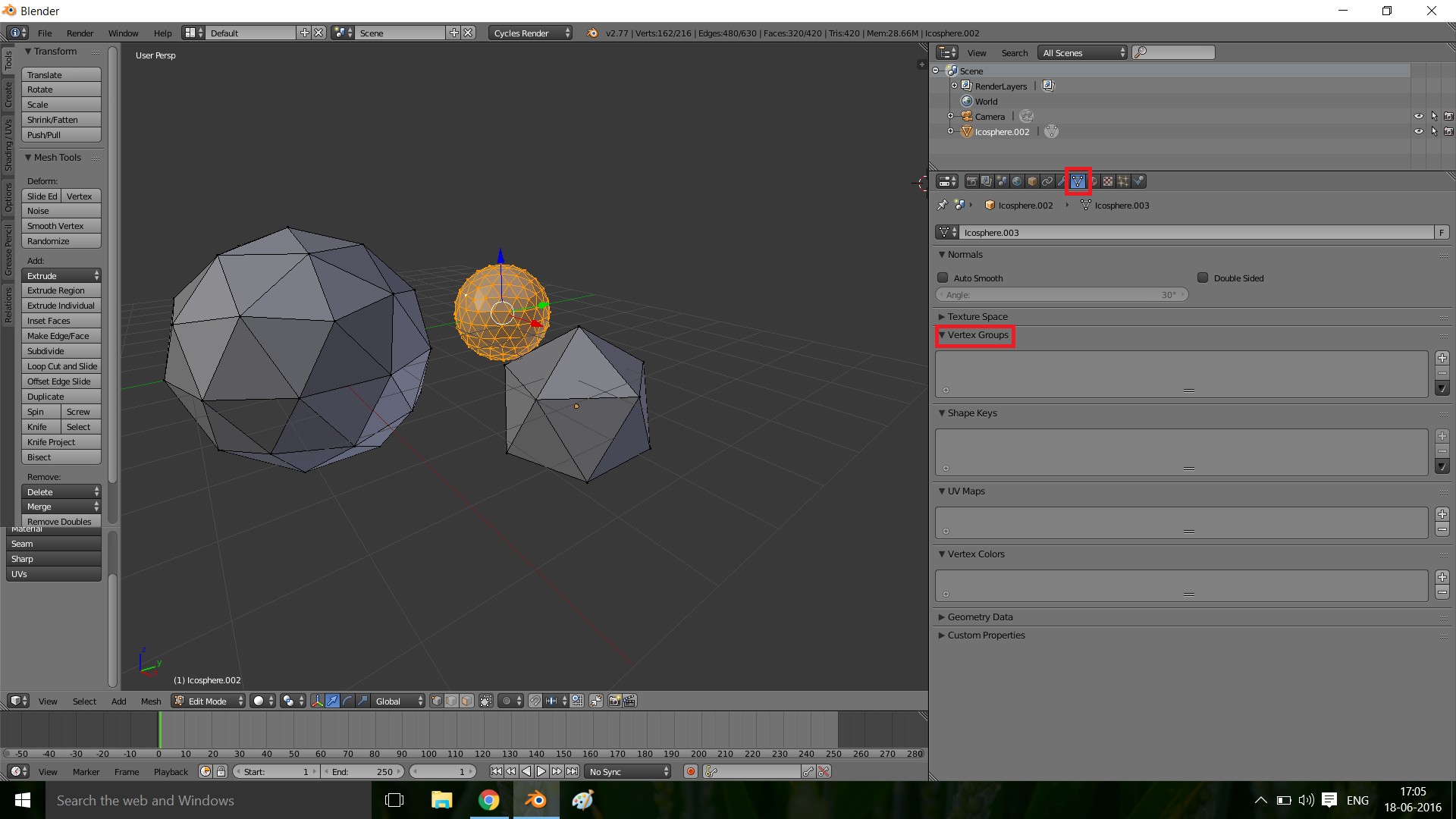 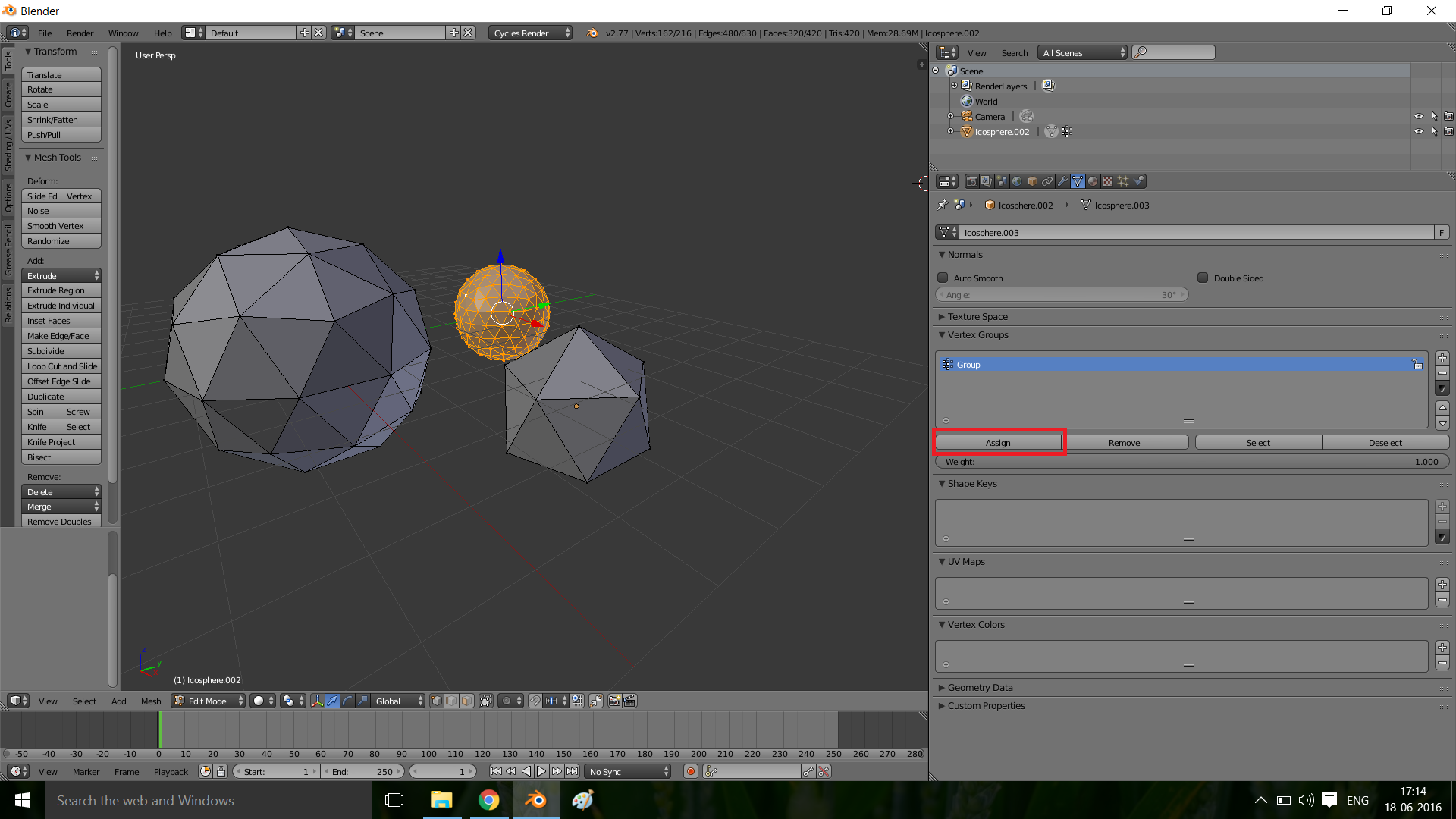 If you click select when the object is deselected, it will get selected.

In Edit Mode you can't name them differently because there is nothing different to name, while in Edit Mode you are not adding new objects you are just adding more geometry to the same existing object. They may seem like separate objects but they are not, they are just a "multi part" mesh.

So short answer no you can not name them differently because they are one and the same object and names are applied by object, not mesh chunk.

If you wish you can easily separate them by pressing P while in Edit Mode and choosing By Loose Parts option.

2
Can't see added cube on my scene collection
4
How to stop objects moving together
3
How to separate two meshes in one object
3
What does this triangle icon mean and how can I add another one?
2
How do you select one of several meshes created in edit mode
1
How can I select and move only one primitive?
1
When I create a mesh and try to select a previous mesh, it selects them both as if they were one object
1
How can I create a new object in the Outliner?
-2
Sub menu gone from Add menu
1
array modifier and parenting
See more linked questions

2
How do you resurface these objects into one object?
0
Can anyone explain why my normals have a mind of their own
1
Problem with particles, converted into mesh objects
2
Set one new origin for a group
0
How do you merge 2 areas of a single mesh into one?
0
How to do this in Blender and select multiple things at ones or is there a better way to do this?
1
Is there a way to unwrap multiple objects into separate UV space?