How to correct collision between particles

In the use particle system how to avoid two particles intersect each other as in the following figure: 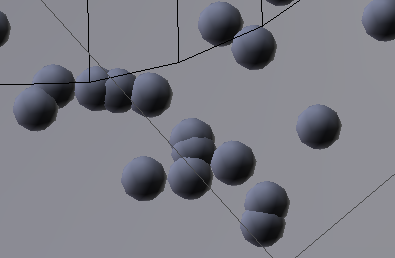 Update:
The original aim was to simulate separation of sands by some structures (combinations of tubes) due to their weights and the system configuration. So in our model, we used particle system to generate a continuous feed of sands into the system. Finally some sands are collected in some containers somewhere in the system.
The Figure shows a collector in which the intersection problem discovered. We also realised that not having self-collision between sand particles may bias the separation procedure as the particles do not collide each other, they were expected to do.

Not the answer you're looking for? Browse other questions tagged physics particles or ask your own question.

21
Is there a way to make particles behave like rigid body objects?
12
How can I simulate powder with a particle system?
4
How do I prevent particle objects from intersecting each other and going though the floor?
13
Set minimum distance between hair particles