Blender for CNC, what to export to?

Blender has 3d printing tools as well as STL exporter. That is good for both hobby 3d printers which all use programs which use STL (eg. Repetier-Host) as an interchangeable format as well as professional 3d printers such as the ones by Solidscape, the users of which mostly use the Rhinoceros (Rhino) program which imports STL files exported by Blender just fine. This is also true for 4 axis CNCs.

However, getting something from Blender to be (2D) CNC milled/laser cut doesn't seem as easy. From personal experience from using services of both, common programs such services use for CNC milling and laser cutting is AutoCAD and CorelDraw. They ask formats which these programs can open. Blender can export to DXF, STL and many other formats. For some reason with the formats these programs ask, either Blender exports incomplete data or wrong/different data, because both these programs import them as wires, no surface data is preserved.

I've had this issue both with CorelDraw and AutoCAD, with different services, and both had to take my model file and modify them in their own programs by creating surfaces from those lines, a time consuming process. I have to pay extra to get the model "cleaned up" and in worst case the CNC milling/laser cutting service provider will refuse to do that and tell me to send them proper drawings, and rightfully so.

And this is not a limitation of these programs, a DXF exported by another program (for example Pepakura Designer) imports fine. So I hope we can find a solution here, I believe an answer would benefit many people who might be forced to use another program to design their milled/cut parts right now like I do. 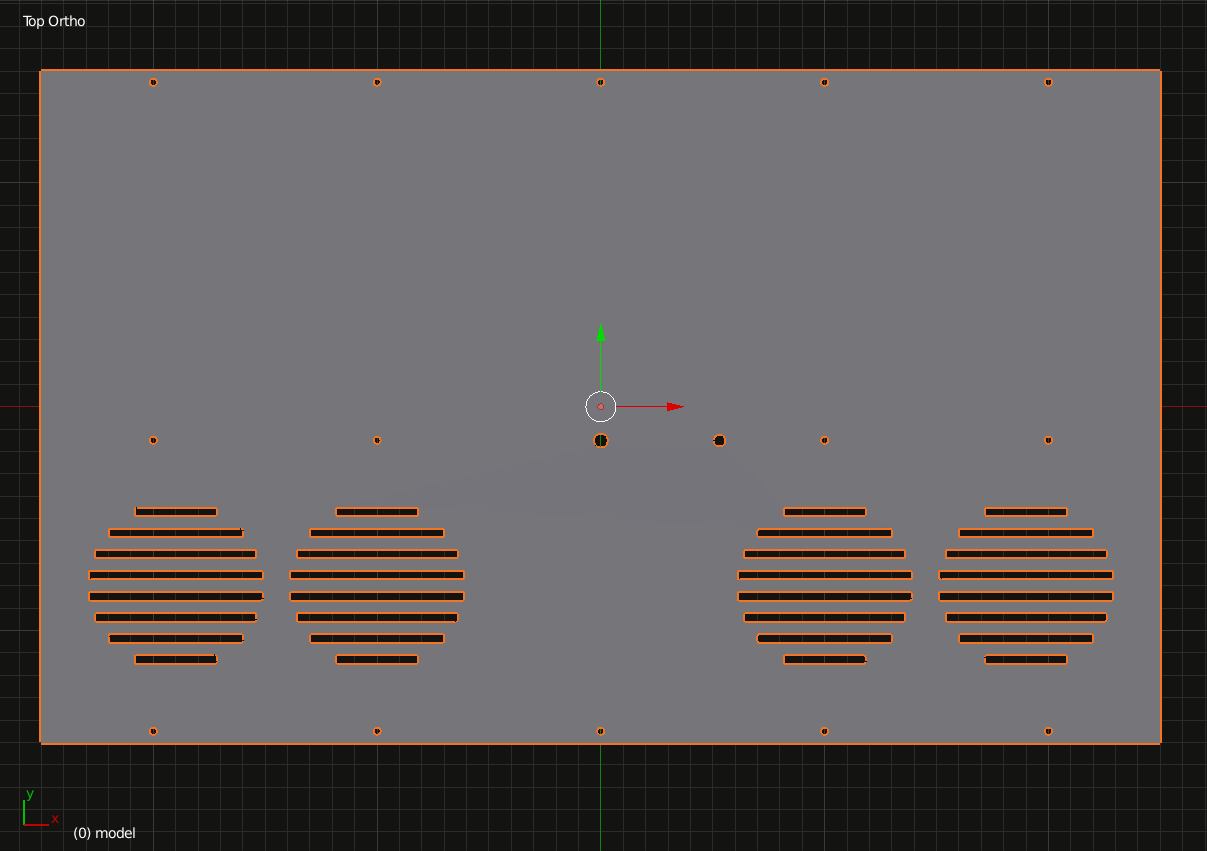 Now, let's look at what formats these programs can import and how they import them.

From the formats Blender exports it only imports DXF. Blender can export DXF, however when it is imported only lines are imported, no polygon (surface) data. 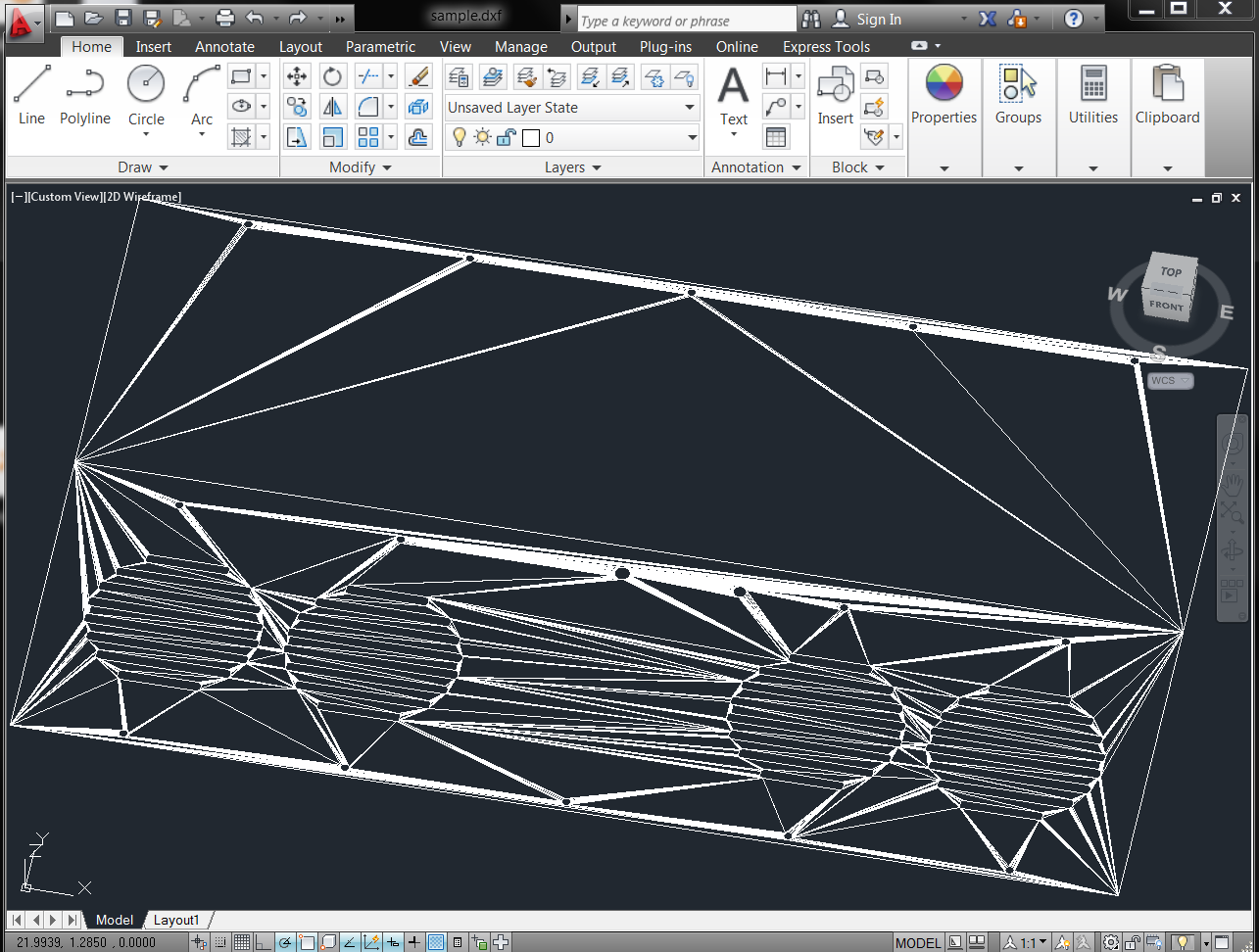 From the formats Blender exports it also only imports DXF. Same issue as with AutoCAD: 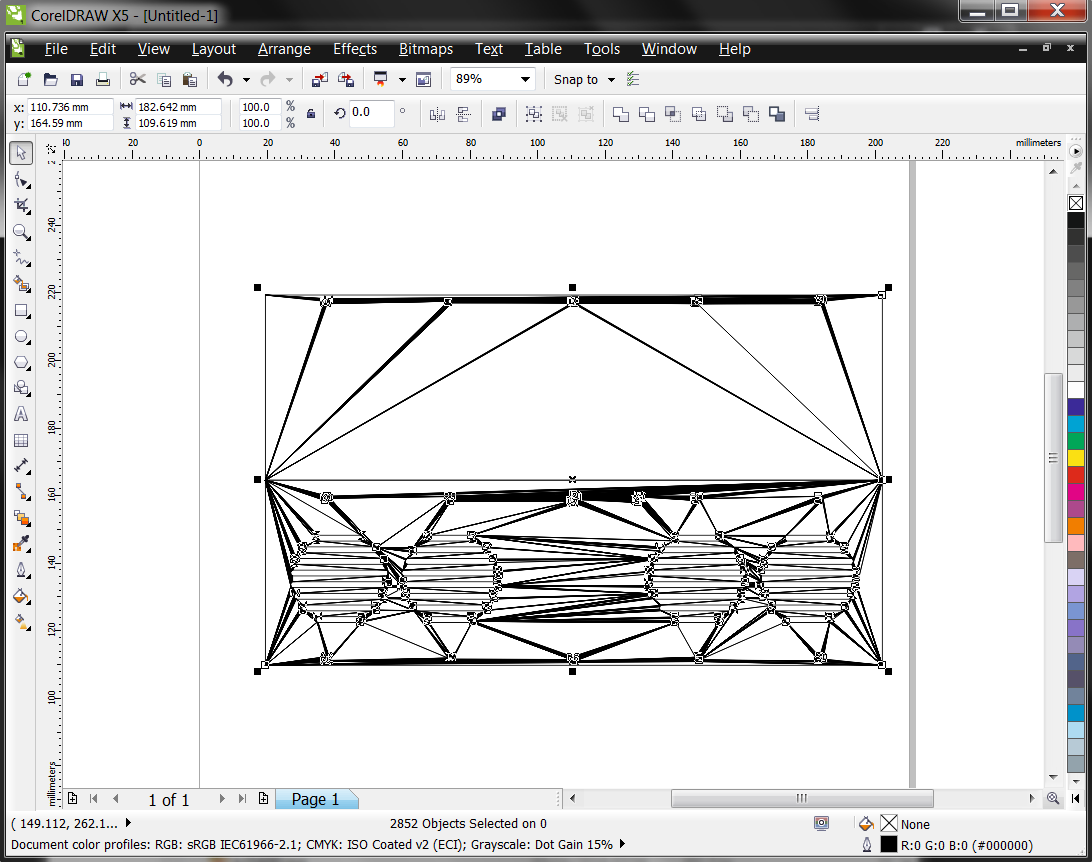 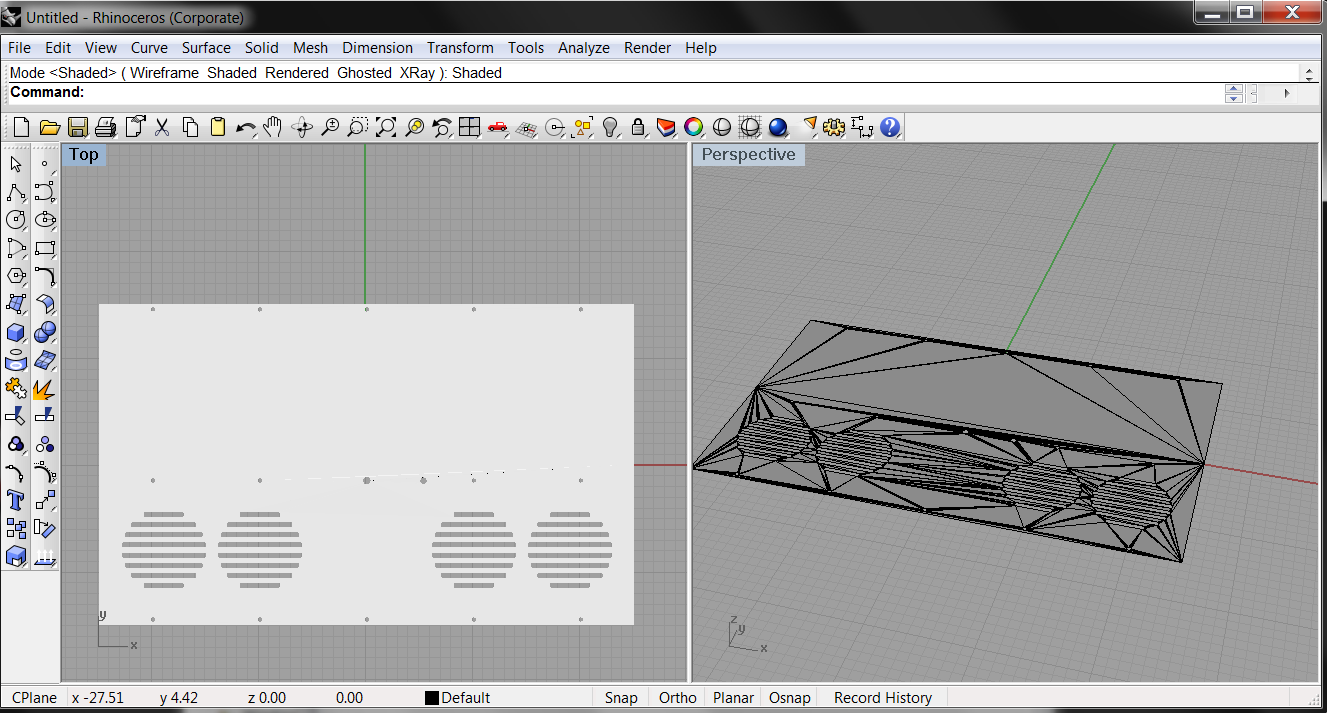 I have not been able to test other programs yet such as Solidworks.

You can say since there is at least one program which imports the data, then it is not a Blender issue and shouldn't be asked. I disagree for the following reasons:

1) As I've mentioned, AutoCad as well as CorelDraw import polygonal data from other programs such as Pepakura Designer just fine. This is enough proof that Blender is at least partially to blame, or at least it can export the data differently like Pepakura does so these programs will import it correctly.

2) I believe it is important to make Blender a practical tool for designers CNC milling or laser cutting their designs. Regardless which tool is to blame, it is best for Blender to offer Blender users some way/workaround/pipeline of getting their designs as a usable file.

How can we go around finding a solution here? Since both these popular programs (Corel, AutoCAD) only import DXF, I see the only solutions being:

1) Finding a way to export DXF data so they will import it properly.

2) Finding a 3rd party tool (free or open source preferred) that will convert an intermediate file format exported from Blender to DXF which these programs will import properly.

For the record, when selecting different options in the Blender DXF exporter ("POLYLINE", "POLYFACE", "3DFACE"), nothing changes when importing in these tools.

Also for the record, if you wonder why use a 3D editor like Blender for cutting in 2D CNC, the answer is simple: 2D CNC is not just used for 2D cutouts, or more accurately the 2D cutouts might be 2D pieces that assemble together to make a 3D object like a computer case. Here's the actual model this 2D cutout was taken from: 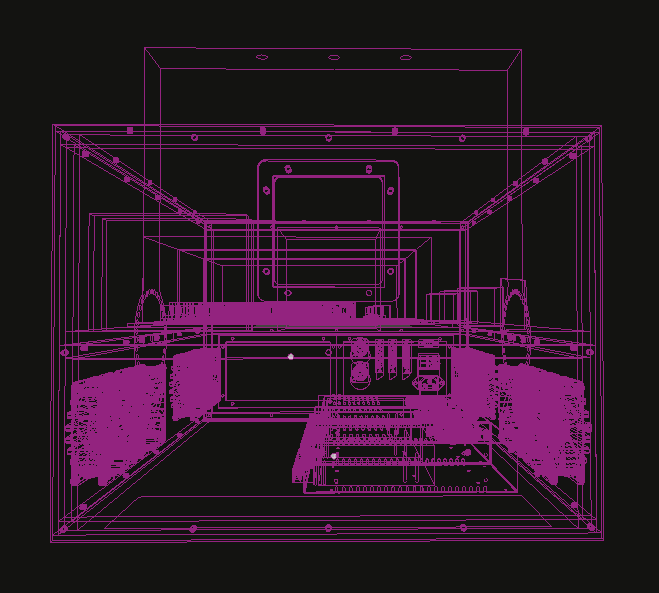 It had to be made in 3D to make measurements and make sure everything is in correct position and fits with the rest of the project pieces.

I've only had some tangential contact with the area I am not much into CNC milling myself but I think your problem comes mainly from the fact that, to the extent of my knowledge, 2D (as you mentioned) CNC milling requires bidimensional contour information of your object, that means a a 2D representation instead of the 3D object itself.

That would mean representing elevations, plans or sections of said object for export, and that is probably why they mostly use Corel (and AutoCAD to a lesser extent) as their main software.

They are illustration-type 2D layout or CAD programs because they require 2D polyline, spline or bezier curve based information to generate a path the machine drills can fallow.

Mesh models being made entirely of triangles can only export polygonized straight-segment-based representations of it's geometry, not smooth curves. That is generally the role of CAD based 3D modeling software which generally used ACIS solid Modeling or NURBS based geometry engines to create it's shapes.

If you plan on making primarily "extrusion based" geometry like like plates or or cut sheet based geometry, like the one in your image, maybe you can start using a bezier-curve based modeling technique instead, more suited and simpler for this type of geometry.

This will also have the added benefit of producing clean curve based geometry and you wont have to worry about triangulation or filling the caps.

You can then use some of the solutions in this answer to export it as SVG based curve. I believe Corel will be able to correctly import SVG vector drawings and produce real contours from it.

As sad as this may seem, it unfortunately still feels like a hacky workaround with inadequate tools.

As a side note I believe a NURBS or Solid modeling based software would be a lot better suited for this type of work, like FreeCAD or OpenCAD or if you don't mind commercial applications MoI is a really good alternative and a relatively cheap one considering the high price of the other available tools out there. 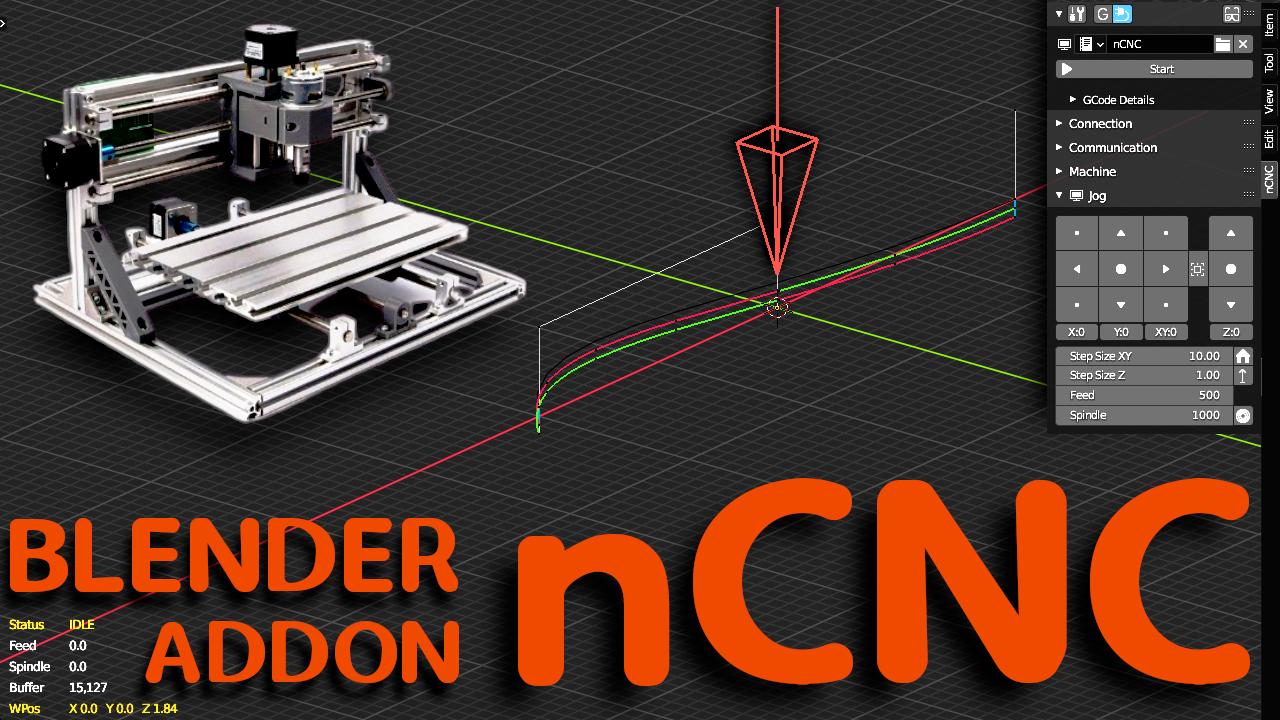 There is a Blender add on that I am currently developing.

You can access the add on from this link:

If you look at the specification for G-Code, then you will most likely be able to accomplish most of your work with very minimal commands eg. "G90" & "G1".

There are many factors why milling centers can not just trust code, but the above is the main one.

You may be able to provide your fixturing within your model to show where this will happen, and some sort of "post" (visual preview of the tool path) to provide the confidence to the machining center that you have taken the appropriate precautions.

There are also other "M" Codes that would be best for the Machining Center to apply on your behalf, as they could be unique to both the machine and the tooling being used (eg. Whether your End Mill should be turning Clock-Wise, or Counter-Clock-Wise). There are also safe RPM limits to run any particular end mill, so the machining center will no doubt want to control this as well.

You will no doubt need to make clear what "you" are considering your "Z-Zero" location. It is fully acceptable for this to be commonly the top of a spoil board material, or at the top of the blank material. This could be worked out with the preferred method of your machining center.

There are also different methods to set where a home position can be (0,0,0), and different G-Codes to deal with that as well that should also be applied by your machining center.

One other main consideration is the tooling.

Milling is primarily done on the center-line of your end-mill. This means that you will have to accommodate for its radius from center. If you are using a flat mill, this will probably be the easiest (but there are many shapes of tools - So you must know them, and how to accommodate for them).

Beyond this. G-Code itself is pretty simple.

(<-- Your Coordinate offsets should be set by the milling center here -->)

The above code just cut a 5 unit wide slot in your material at full depth.

You could write that pretty easy by querying position (vertex locations) in Blender. But you have to know what your milling center will accept.

There's also grashopper but not sure if that would fit your needs.

34
Is blender actually useable for engineering?
33
Can blender export 2D curves to svg?
12
How to make all quads or ngons on your mesh planar (2d)?
0
Is there a way to export DXF without triangulation

4
Help with exporting a 3d model in ~.stl format and adding colour data
4
Bad 90 rotation from
0
What are the Images in the UV editor for and how to prevent them affecting OBJ export?
0
export> stl> EXPORT STL, blender keeps saving the wrong file
0
ShapeKeys exported with same geometry in DAE export