I can't create a Pipe 3D without annoying shrinkage in the corner of my bezier curve using bevel object. Those are my step. I create a bezier curve (on 3 axes) transforming two corner in Vector corner (to have a perfect angle)

I generate a circle and using bevel object I sweep the circle along the bezier (3d).

Easy...BUT I can't undestand how to solve the shrinkage in the corners. Other artifacts (such as compenetration) comes when instead using a Vector corner I use a normal (automatic) corner and model it in 90 degree shape. 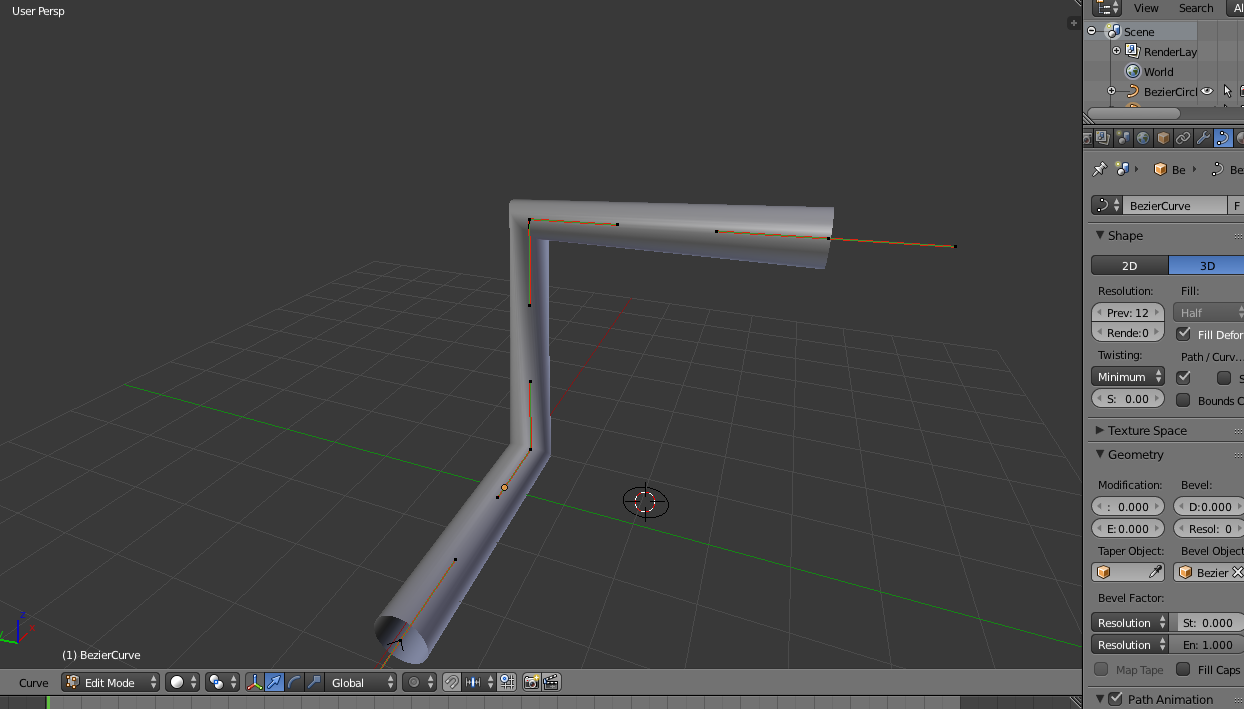 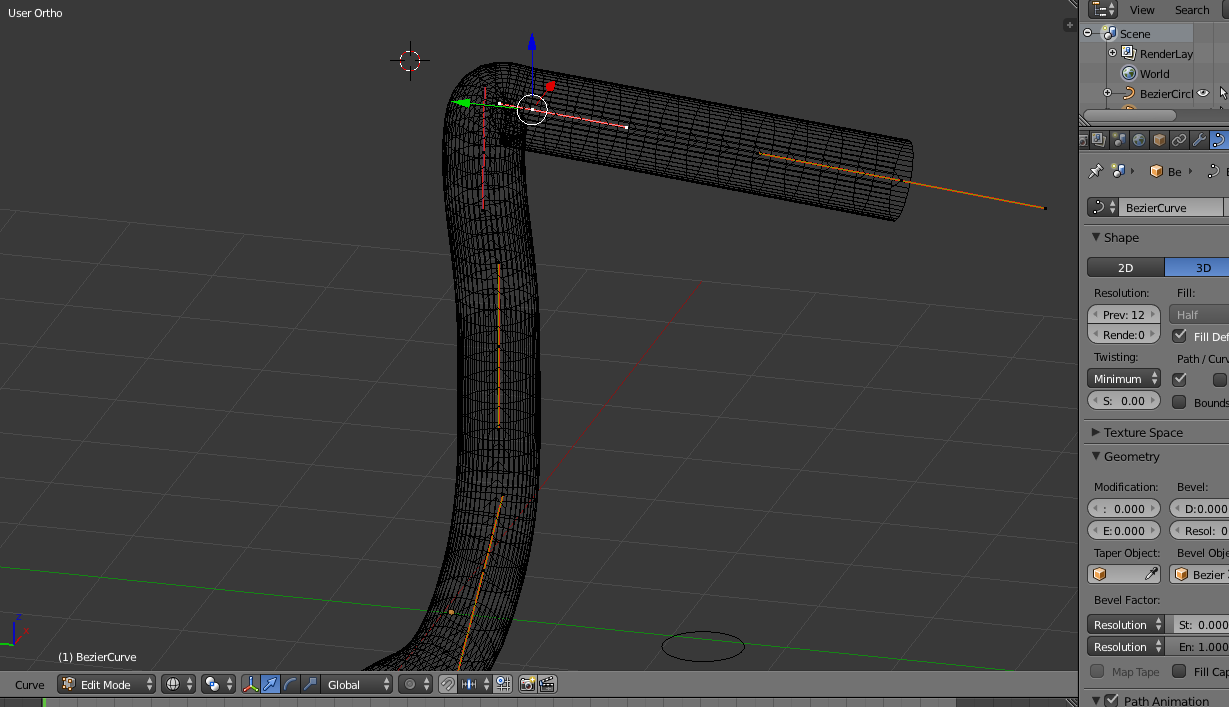 Short answer: No you cannot. It's a known limitation of the current system and unfortunately there is no current way around it.

This is currently planned to be improved as part of 2016 GSOC Bezier Curve Improvements, but if it will ever be successfuly done or actually land in an official Blender release remains to be seen.

Either use a 2D curve, which causes no distortions, add extra control points near the tight bends to minimize the deformed area or where possible use separate segments. See this answer for more details.

Have you considered the 'Tube Tool' add-on? I'm not sure it will satisfy your requirements, but it is straight-forward.

So while it is impossible to do this using only curves at the moment, there are ways to achieve the desired result. I thought I'd share this info just in case someone doesn't actually know any method other than curves, and they're stuck as a result.

Firstly, I made a free addon that automatically converts a mesh into a curve shape with the corners corrected. You can download the .py and install it how you would normally install an addon, or just put it into the text editor and run it.

However, before you do anything, know that Blender can get this kind of result using 3D curves: 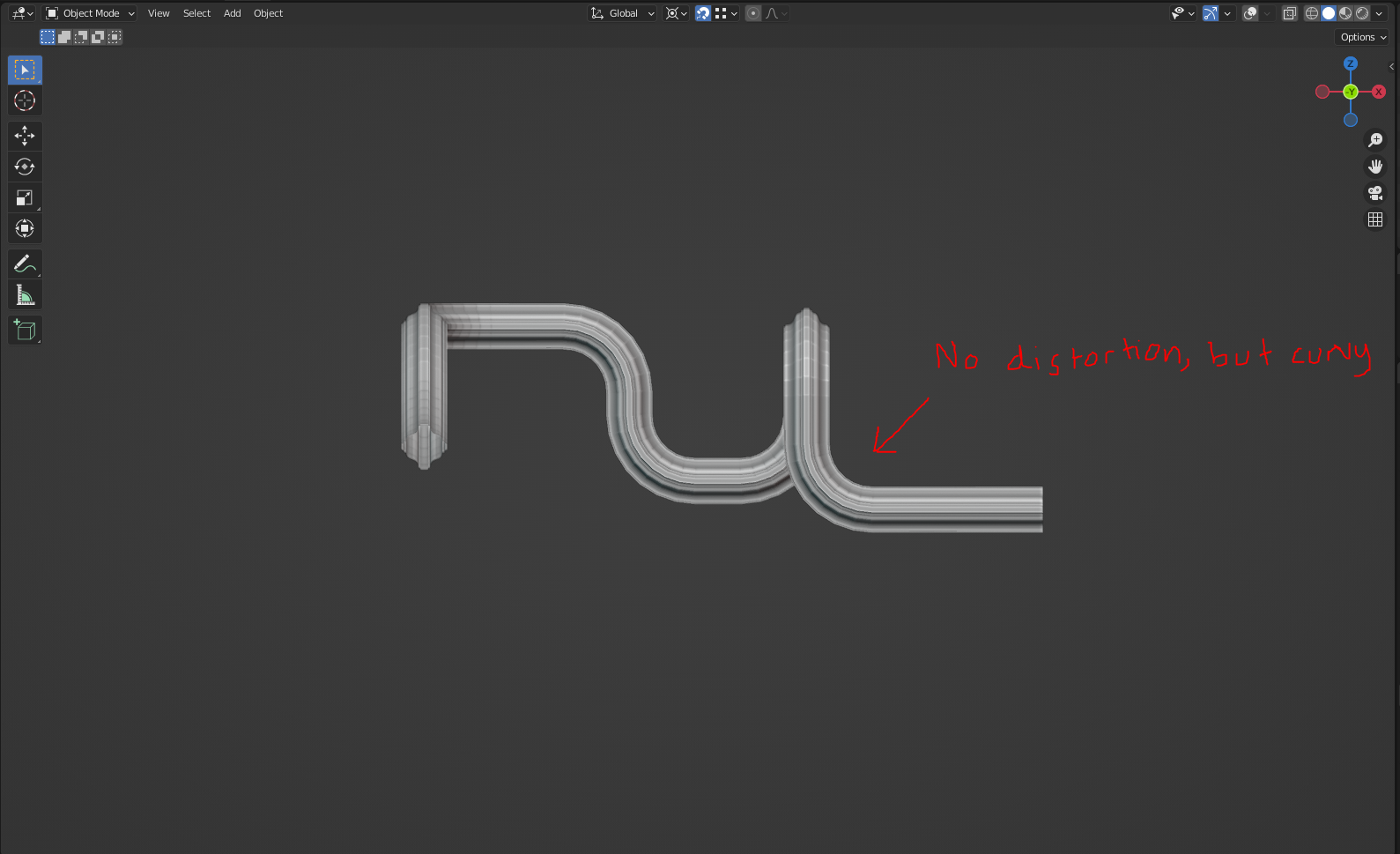 You simply have to bevel all the vertices a fair amount by pressing Shift Control B. There will still be small distortion, and you have to bear the curvy edges instead of the straight ones.

Also worth mentioning that if you only use 2 dimensions for the curve, then just set the curve to 2D and it won't have any distortion either.

But if you need straight corners and multi-dimensional curves, read on.

There are 2 manual ways to do this. The first I will show using the Shear tool.

Let's say this is the path you want the mesh to follow: 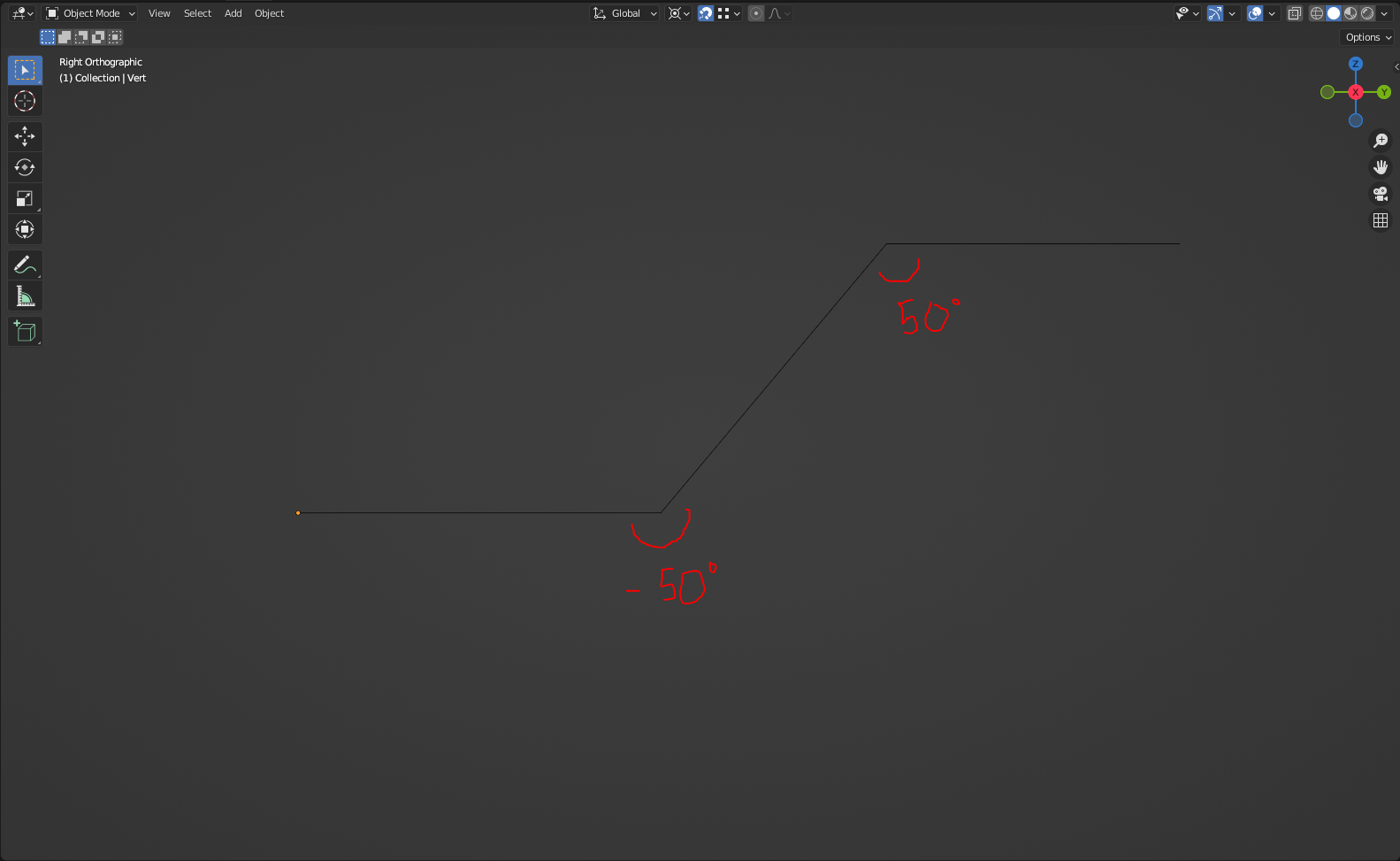 Take your mesh, extrude to the first point, and then select the face that needs to be sheared. Put your cursor where you want the center of rotation to be and set the transform pivot point to 3D cursor.

Then, shear. The correct value for the shear is as follows:

Say the angle is 50 degrees.

This is what you put into the shear. 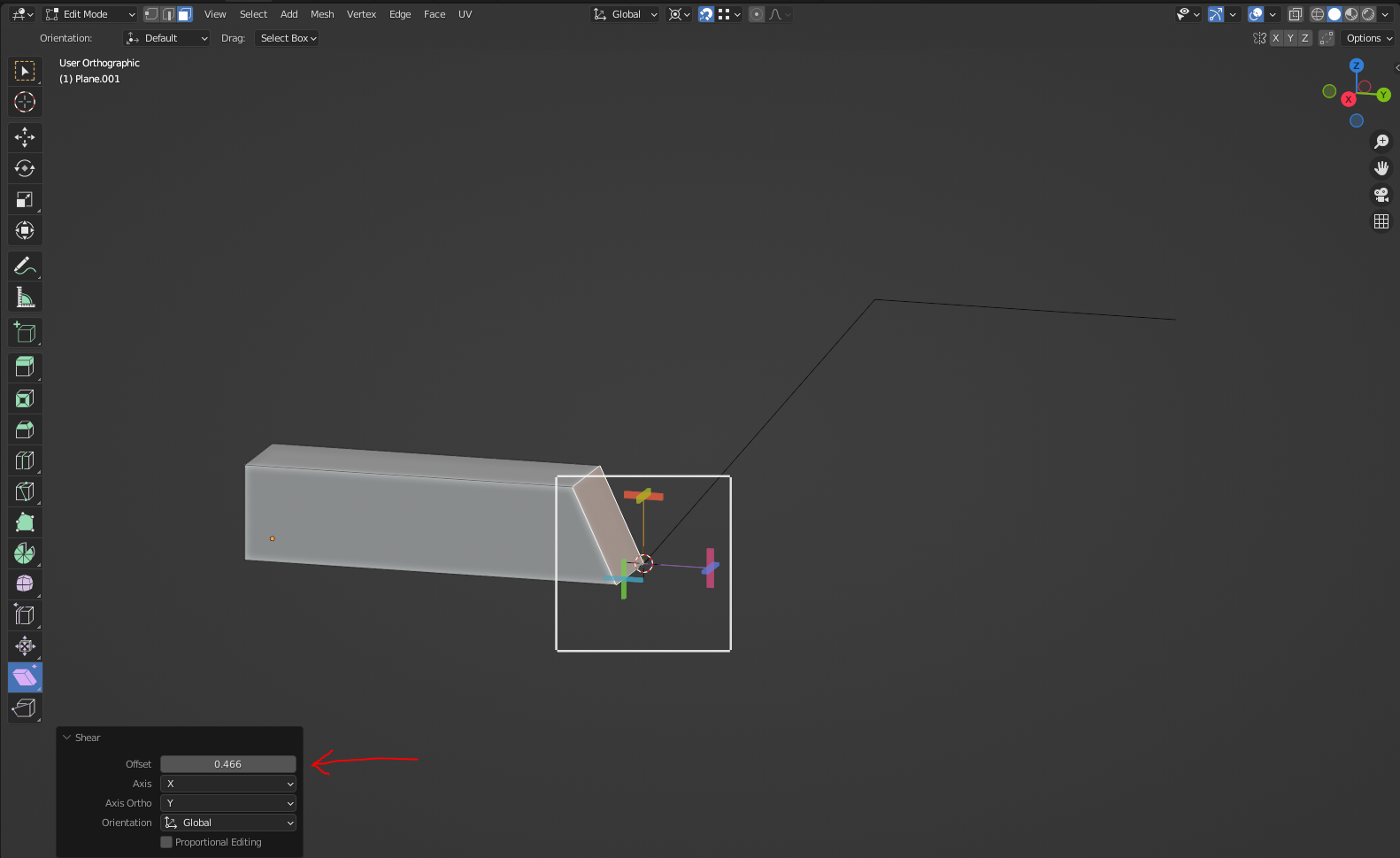 Then, the second 50 degree angle is already sheared, but once we get to the end, you have to flatten out the face. To do this, simply scale the face by 0. 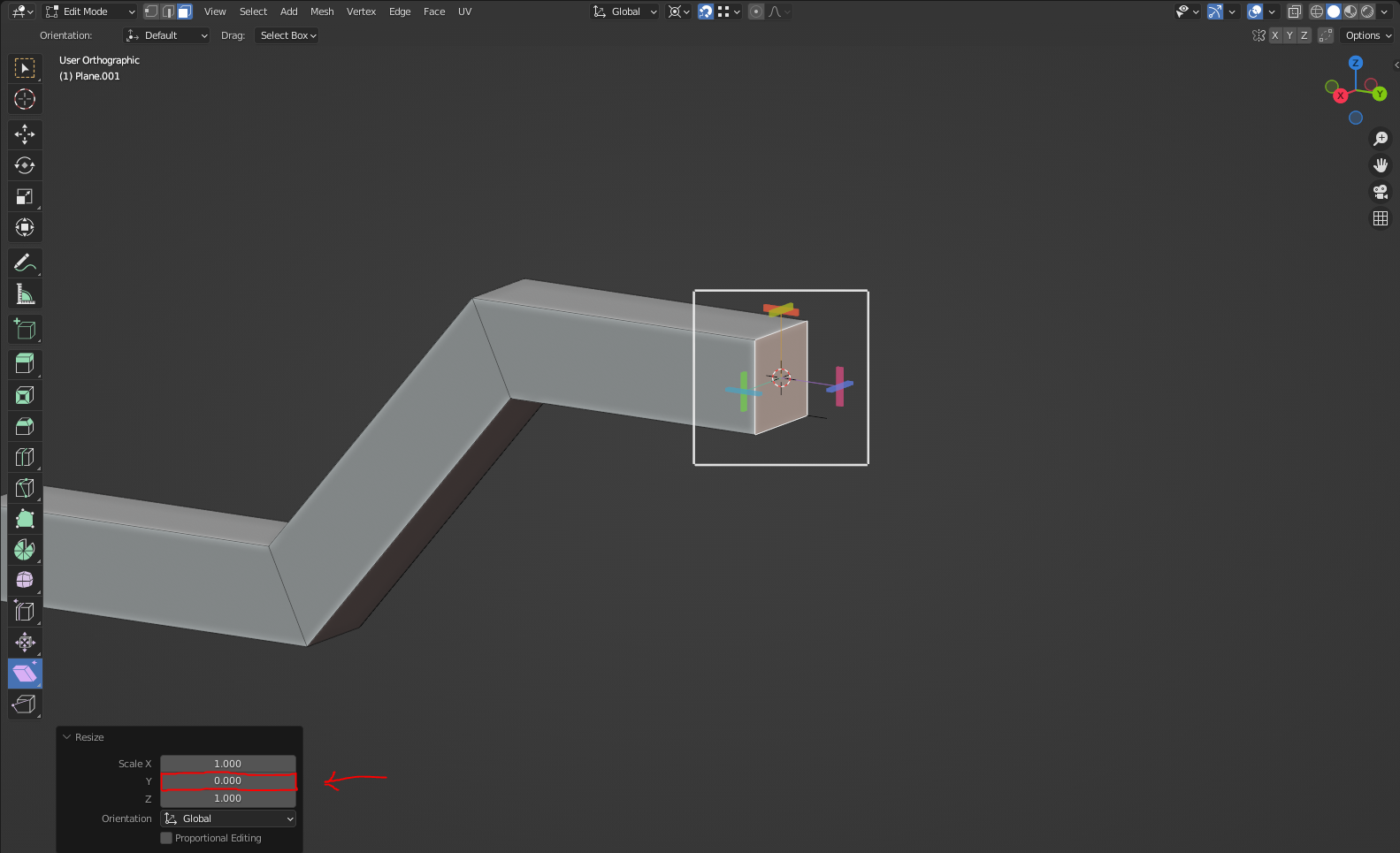 Without the shear tool

Maybe you use a 3D program that does not have the shear functionality.

If that is the case, then instead of shearing, simply rotate the face, and scale.

Exact steps are as follows:

Once you get to the first point, rotate the face by from where you want the center of rotation to be, and scale along 2 axes by the correct amount.

Here is the math:

Say the angle is 50 degrees.

If you do not scale, but simply rotate, you get this: 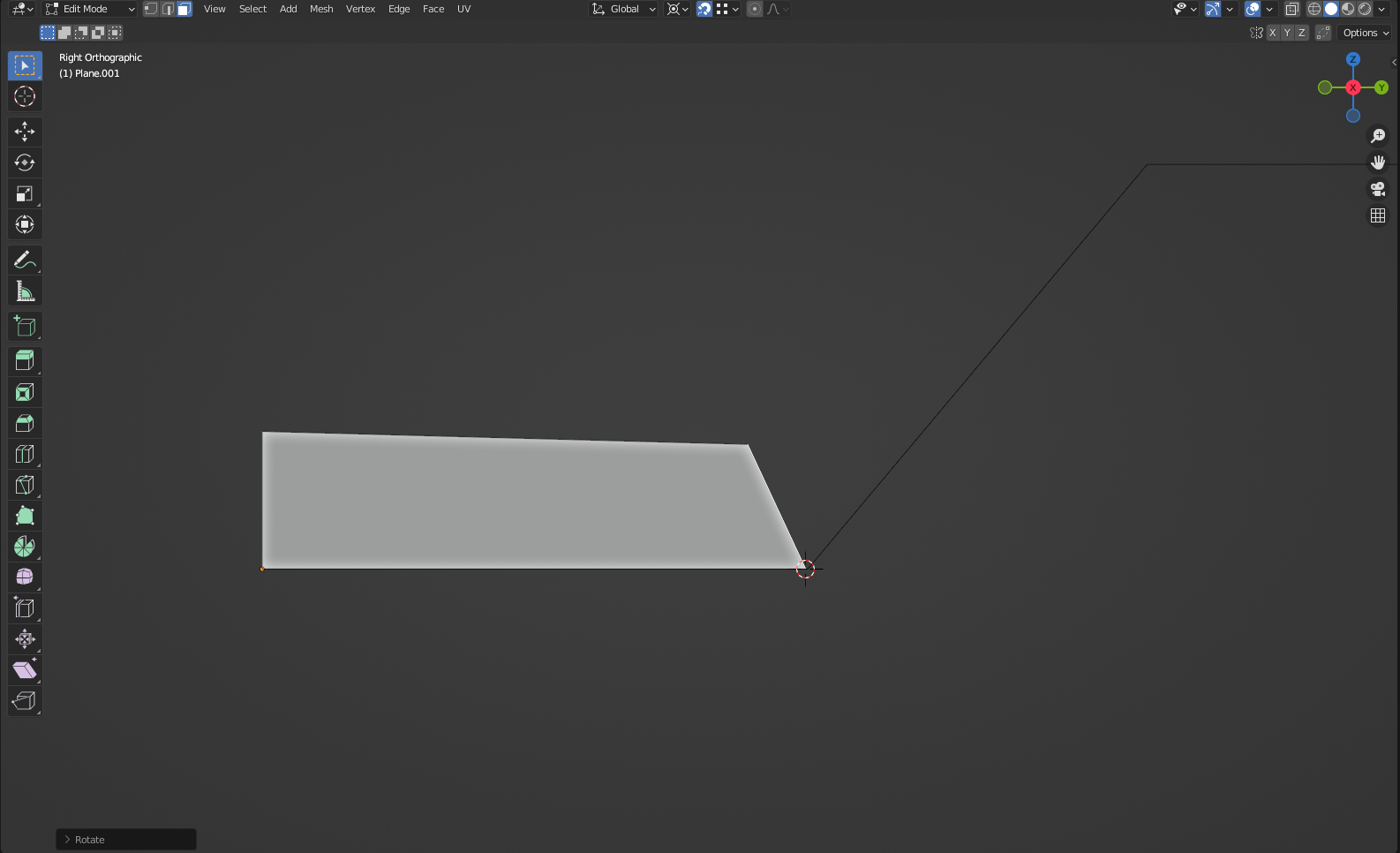 As you can see, it's distorted. Which is why we must scale along, in this case, the Y and the Z by the value calculated earlier. Then simply extrude, and if needed, scale the face by 0 on the correct axis to flatten it back out.

The results should be exactly the same using both the techniques. But once again, I made an addon to expedite this process. So use that if you have a lot of this type of task to do. Hopefully in the future Blender will fix the 3D curve feature and automatically correct for this kind of thing so you won't have to do any of this. But for now, I'm pretty sure these are the only solutions.

1
Creating and Animating Line Segments?
1
how to make curve bevel turning evenly?
2
Making sharp corners with bezier curve
1
How to get even, straight edges using bevel profiles and curves?
1
Uneven thickness when using bevel object along a curve
11
Extrude Along Path (Sharp Corners)?
8
How to make beveled 90 degree corners on a curve better?
1
Bending objects along a curve
2
how can I extrude curve shapes onto curve without tapering
1
Bevel not matching the curve object source
See more linked questions