Do failed tracking markers still contribute to the solution?

Does Blender solve the camera only for markers which are able to track the entire scene?

For example, I have a complicated shot with a huge camera movement. The camera moves forward, leaving some markers behind causing some of them to fail by the end of the shot.
However, they give nice information about the camera in the first part of shot.

Does blender solve camera for them? Or only for markers which "survive" in the scene from the beginning to the end?

All available markers are used when creating a camera tracking solution. Markers that have moved off screen can be cleared of bad tracking data to help improve the solution.

By going to the last good frame and selecting the marker you can use Clean After or go to the first good frame and press Clear Before, you remove the tracking data that is contributing to a bad solution. 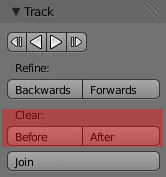 This short demo by Sebastion Konig shows how to use the tracking curves to find bad markers.

It doesn't ignore them, they're still used for reconstruction like any other marker. Note however that there has to be a minimum of 8 (IIRC) markers that must be tracked through the entire shot.

When solving tracking points you select two frames for calculation. I guess only active points in frame A and B are used to solve your camera/object.

6
Some Data Failed to Reconstruct, Motion Tracking
2
Camera tracking reference scene to match different shots in a common space
2
Exporting camera tracking markers from Blender
1
Does scale of camera have an effect on camera tracking a scene?