I have somewhere (not somewhat) between 3 to 12 (that all indecates a variation from one number to a larger number, not a set of 3 or 12 film strips. which the words somewhat and the word 'and' indecates. I knew what I was speaking of. leave that alone Mr. MOD man)

I have somewhere between 3 to 12 film strips in Video Editing, then when I mark a point in the film, then I try to select a film strip to move it into place to find where I want to cut to that (different) strip, the marker gets grabbed instead of the strip even though I right click the strip and NOT the marker. It still moves the marker instead of the film strip for some strange reason that lays beyond my comprehension.

How do I get it to stop selecting a marker when I right click on a different strip?

To avoid moving markers, you need to move the mouse cursor away from the marker region at the bottom.

e.g. Here is an example for Select All operation:

Or you can toggle Lock Markers from Marker menu, to make them not editable / selectable: 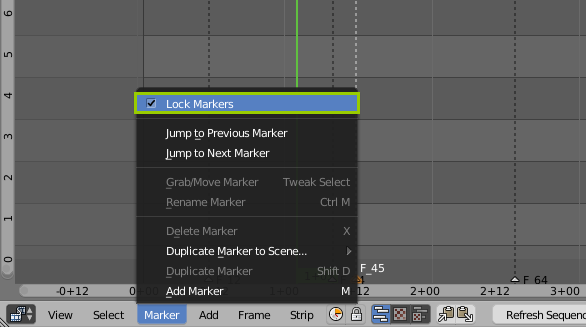