How to properly hook up various maps types in Cycles?

I created some texture maps in MindTex to use in Blender, but I can't figure out how to properly hook them up. The maps I have:

As you can clearly see it's a pretty big difference.
Here is my material node setup in Blender.

In the examples I don't actually use self illumination or reflection images, but including this in the answer would be helpful.

First thing to have in mind is that you have some conflicting data, and some redundant maps that can't all be used at the same time because their functionality overlaps.

Second thing to have in mind is that Blender Cycles is a physically accurate renderer, that means the results tend to converge to a physically realistic solution. Some of the maps you have there are made as approximations of a real solution and as such are "incompatible" with the way Cycles works or at the very least not needed and will "worsen" the result.

Ambient Occlusion AO map is for example a map that is generally useful for real time rendering contexts, but usually not desirable in offline or realistic renders. It can still be used in cycles to but the results will be "less realistic" and will partially ignore scene lighting. 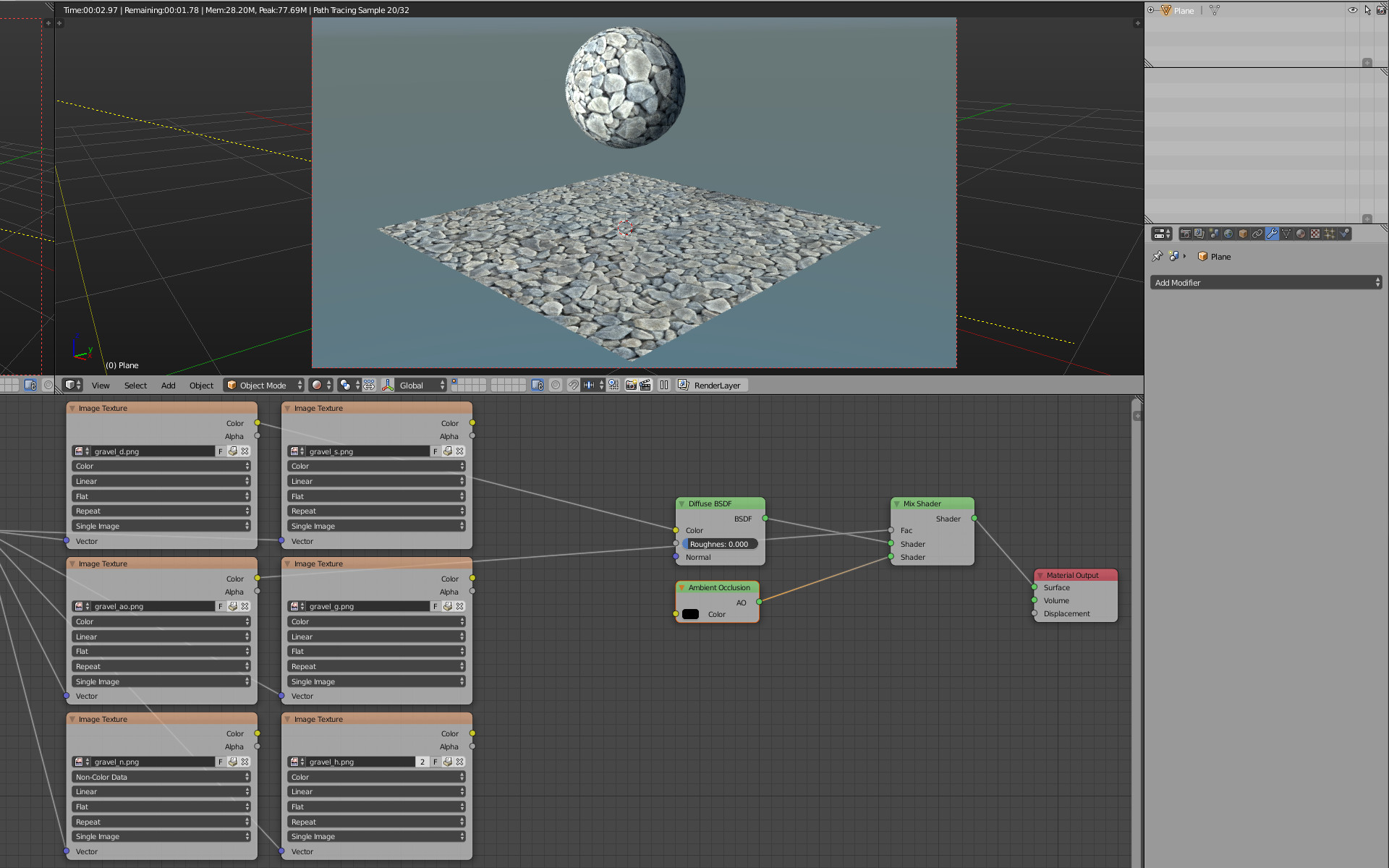 As my default "base setup" I would recommend using the Diffuse D map on a Diffuse Shader color socket, the Specular S map as a mixing factor to mix it with a Glossy Shader (amount of shine or specularity) and the Glossiness G map as input for the Glossy Shader Roughness socket (how clear or rough each reflection is): 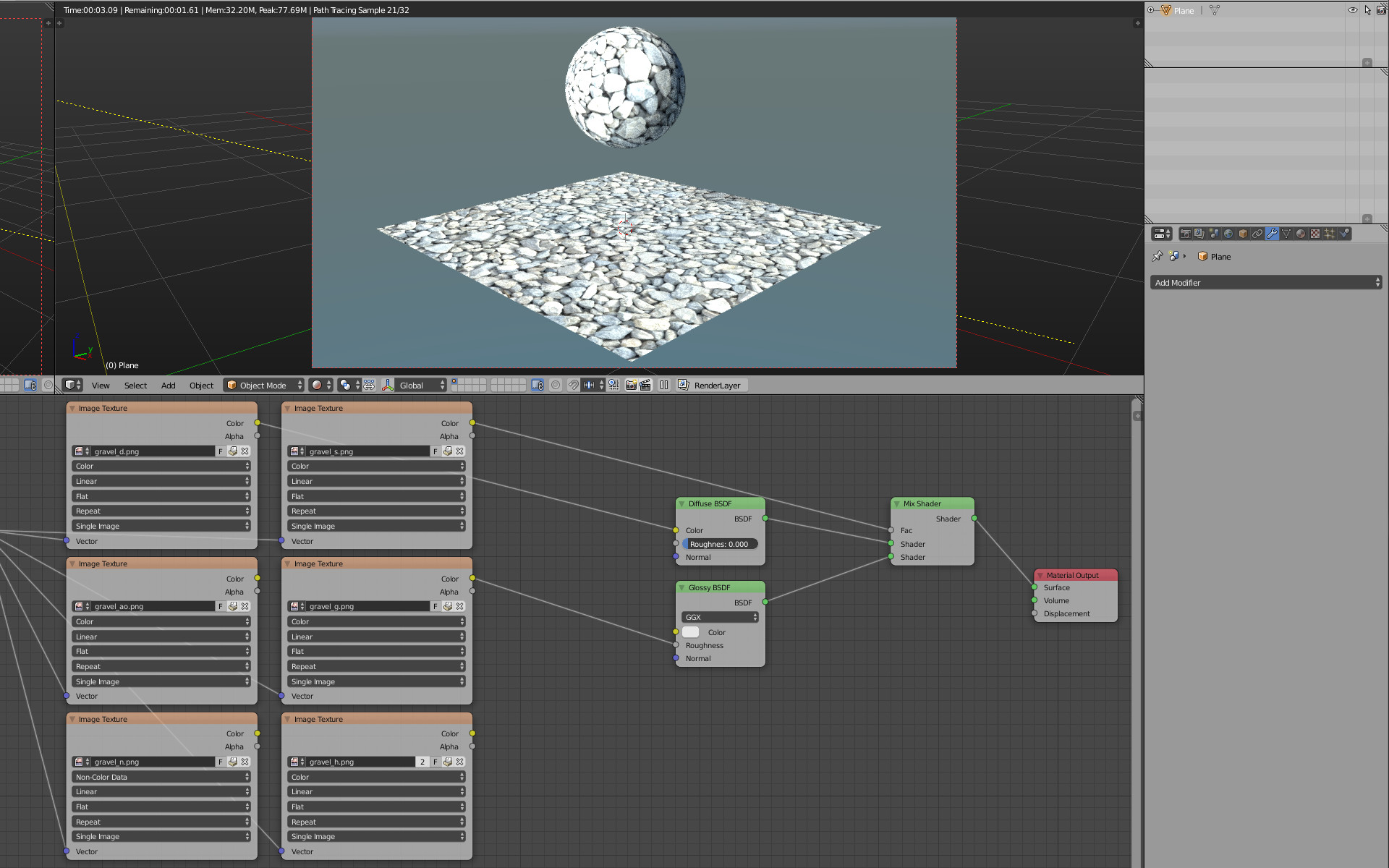 Then the Height H map and the Normal N map are mostly self excluding, either use one or the other as far as I know. I am not very proficient with Norml maps but would go with the height map which is more versatile and easier to use but do as you please.

Either use the normal map with a Normal Map + Bump Map node connected to all used shaders, 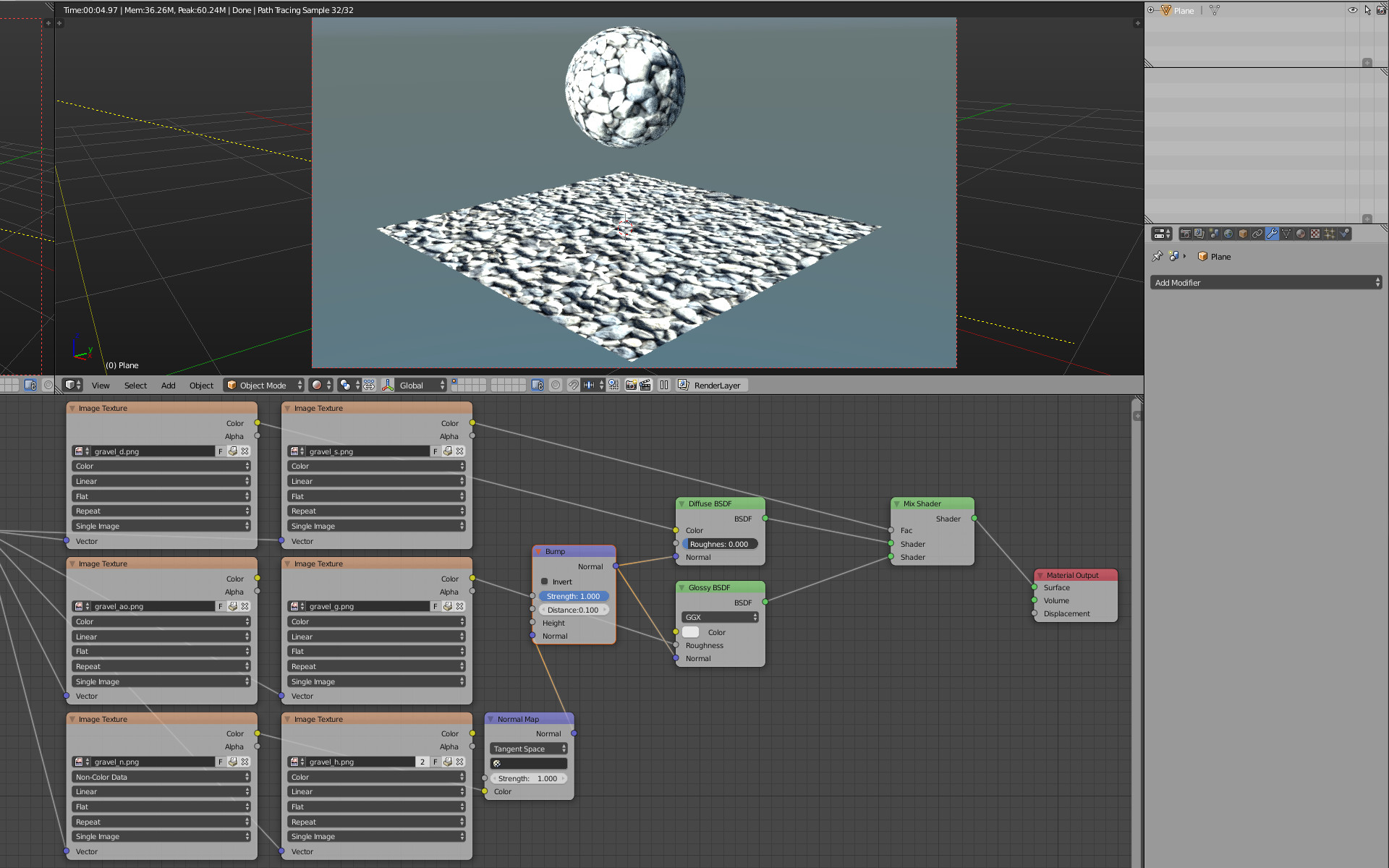 Or use the Height H map as bump, as material displacement or ideally directly in a Displacement Modifier for actual geometry deformation 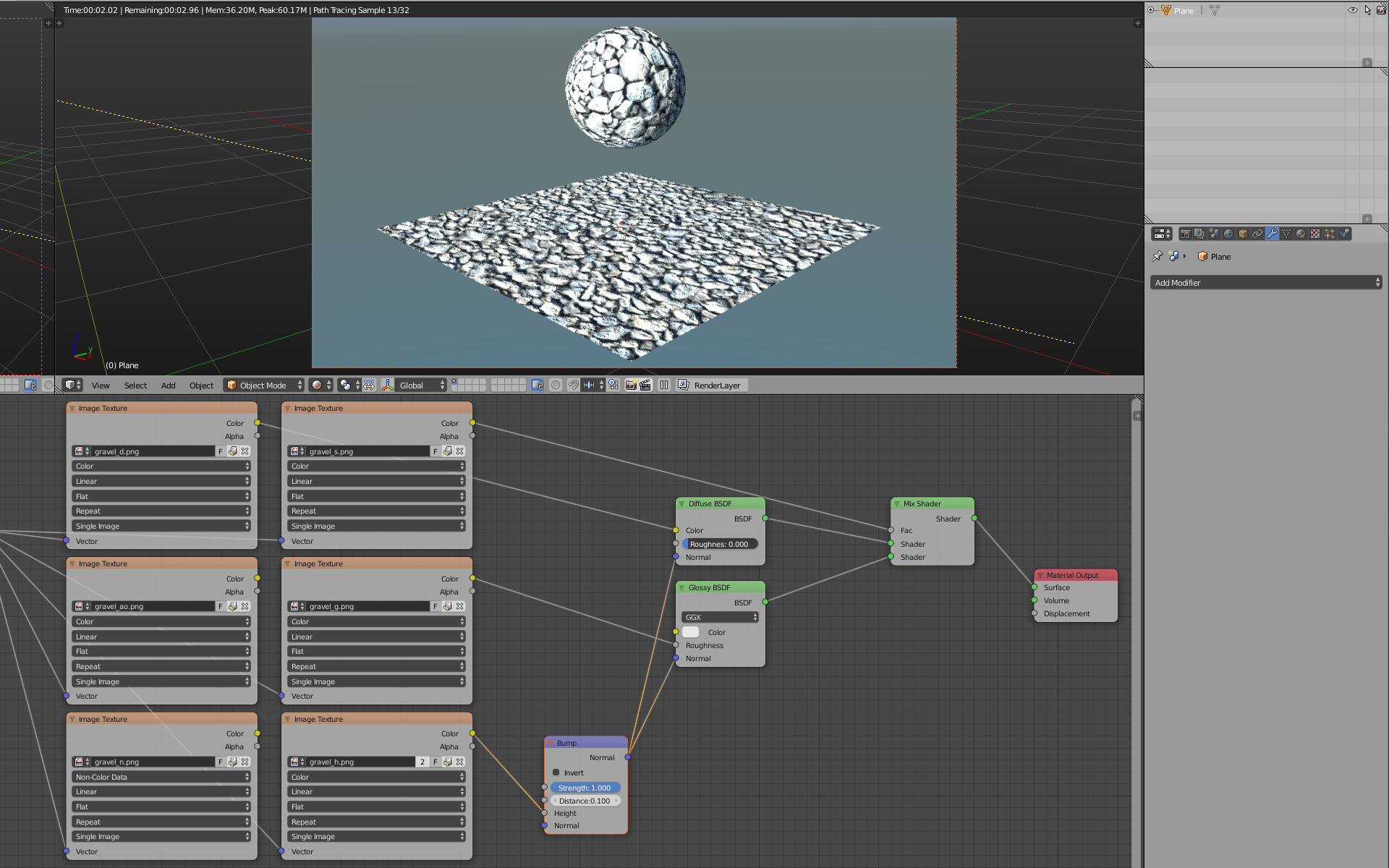 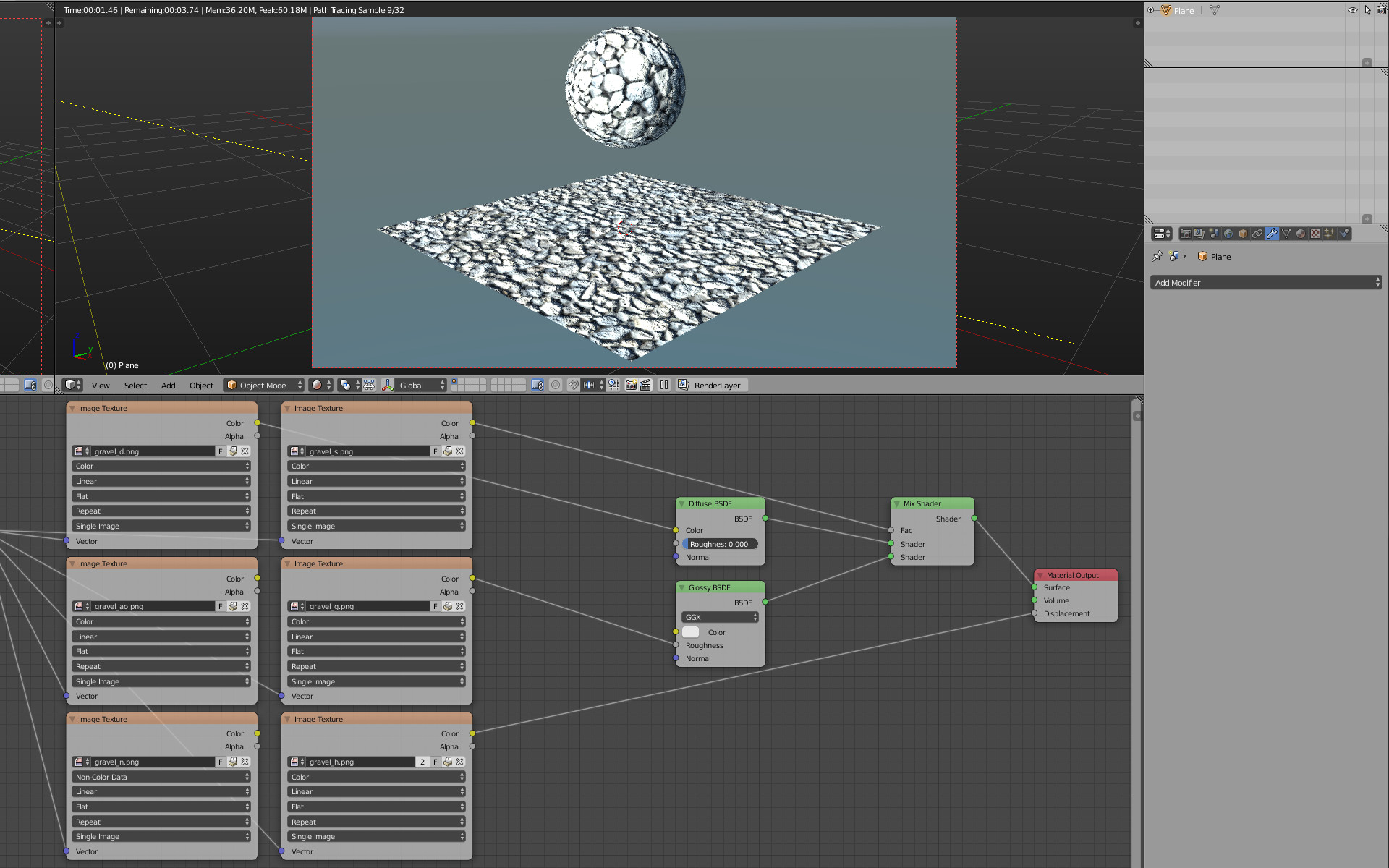 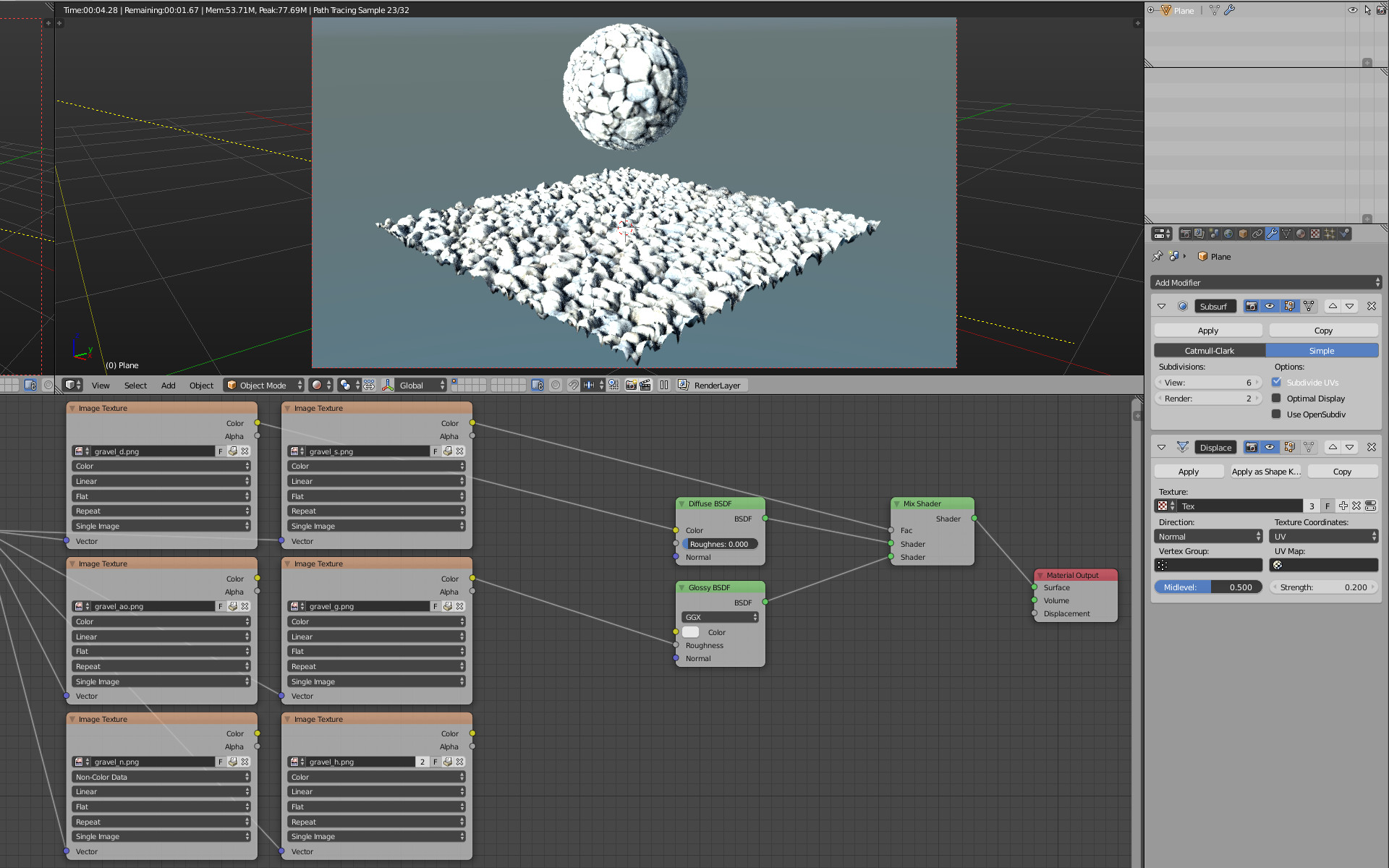 Use Non-Color color space for most textures.
Only Color and AO maps use sRGB color space 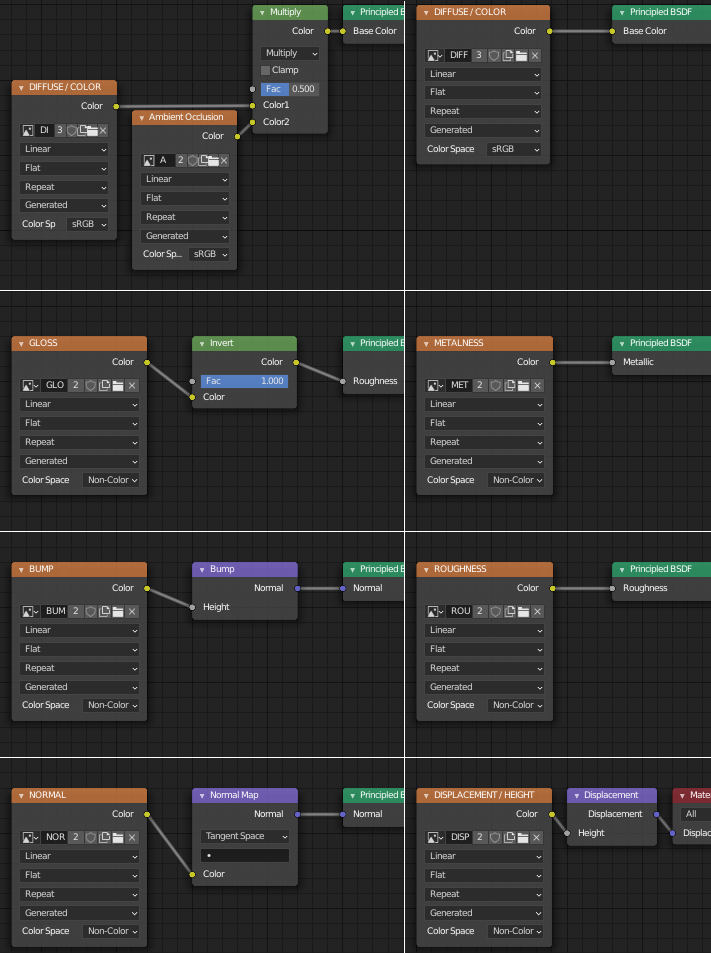 Also: 4) plug the heightmap "gravel_h.png" into the displacement modifier after subdividing the surface that is being textured. 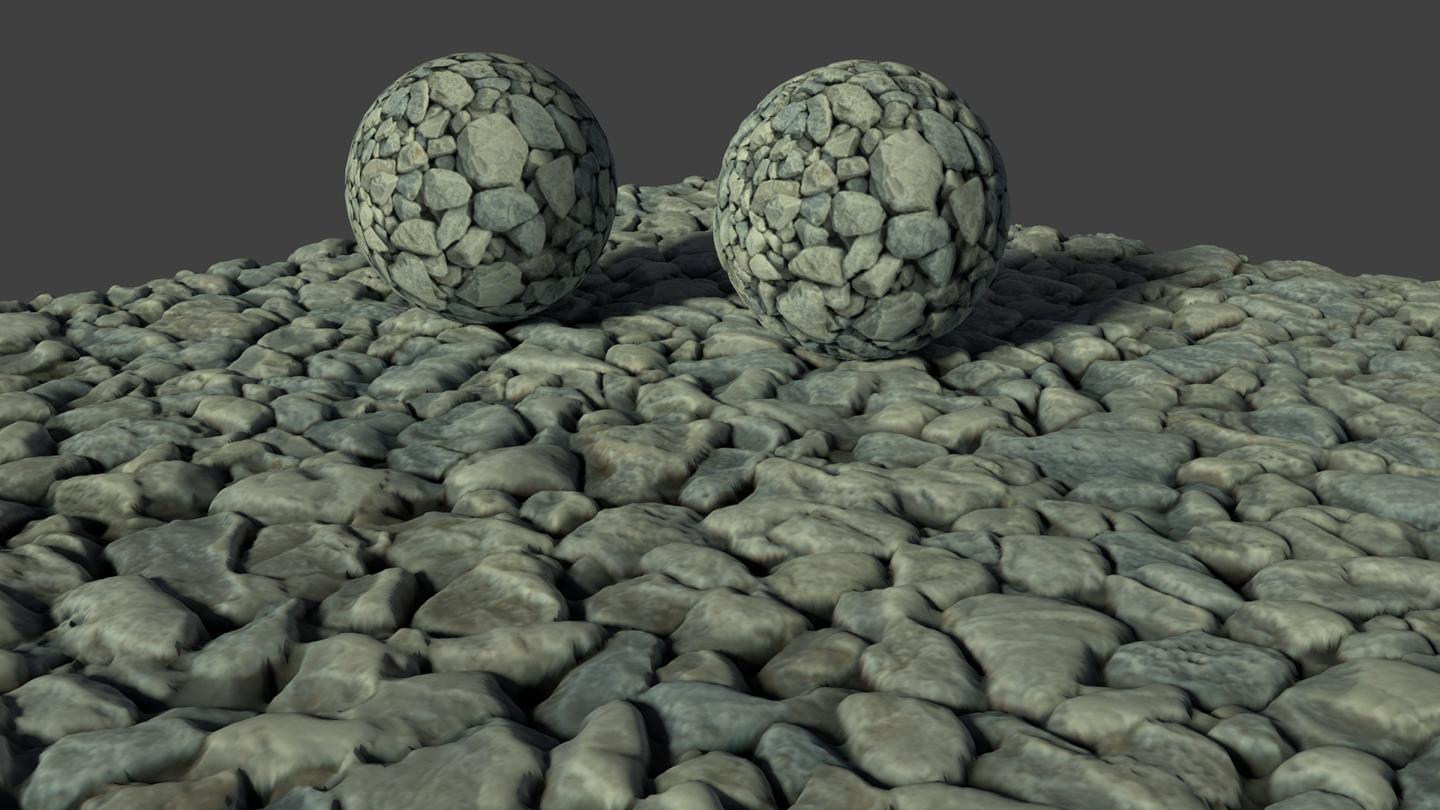 The left hand sphere is not height mapped, the plane and the one on the right uses a subdivision surface modifier and then a displcement modifier with the "gravel_h.png" as the texture. the strength can then be adjusted to taste. As I inderstand it you could use the normal map and AO map to fake a lot of this for a faster render - e.g. animation / game; and i even hesitated to use the specular map as I have already likely got some/all of the info in the gloss map) 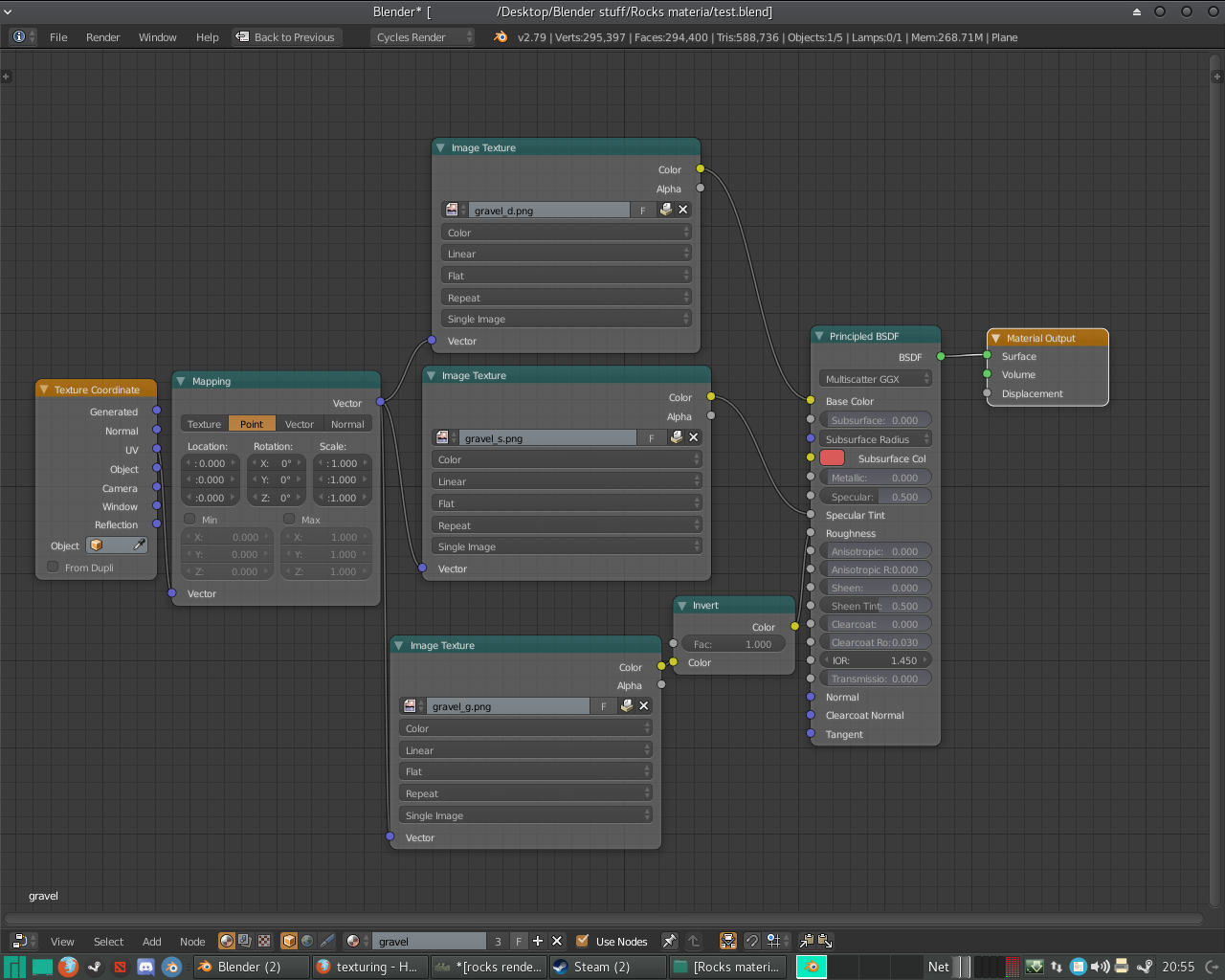 The quickest way to generate a node setup for your textures is to use Node Wrangler.

First Enable the toolset in menu Edit -> Preferences, Add-ons tab: search for Node Wrangler and tick the check-mark in the results. It should stay enabled in future projects.

? - I couldn't find such texture on texturehaven.com

Today's final result will be this: 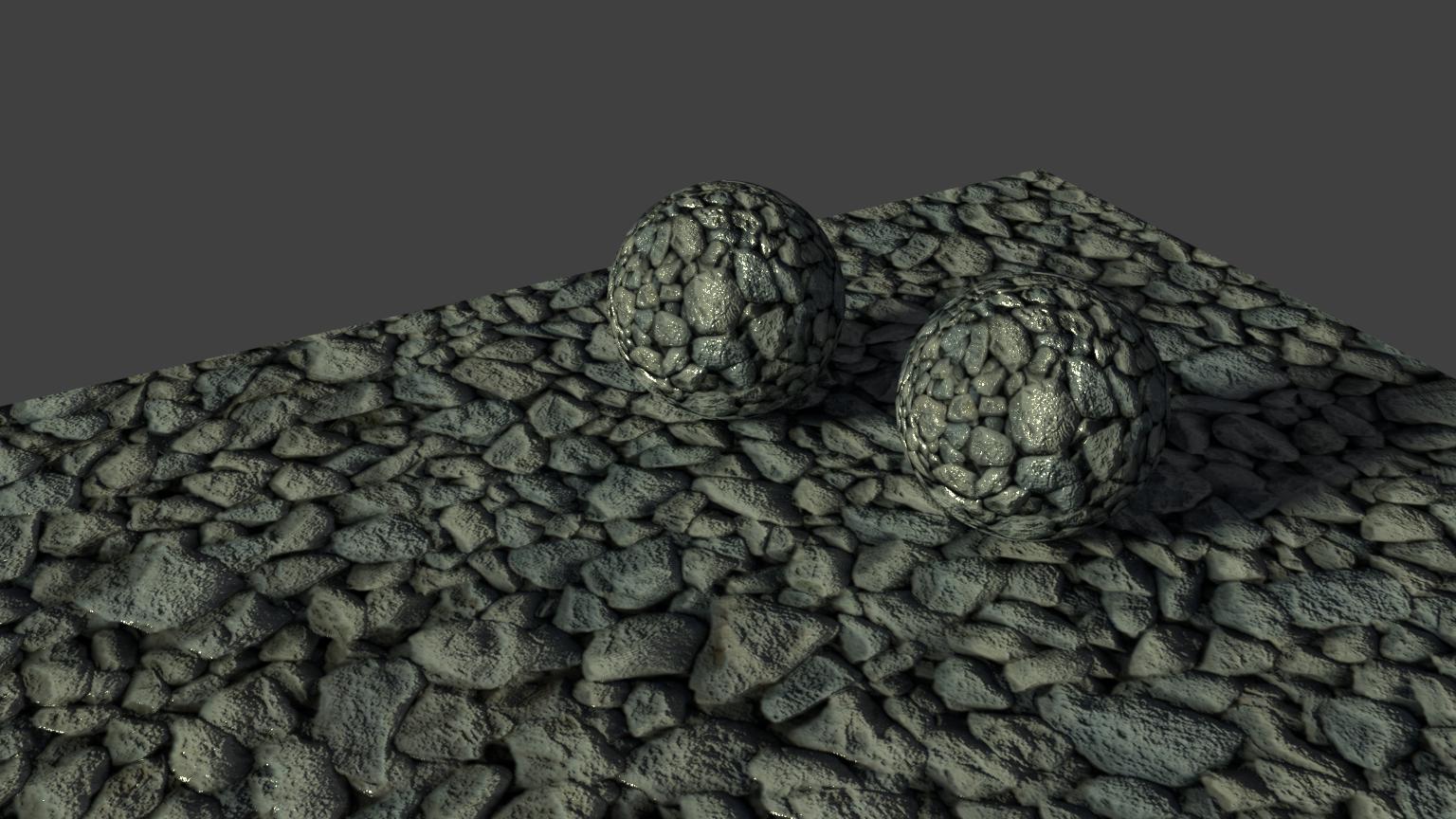 Plug both into a Color > MixRGB node set to Multiply. Send the MixRGB's Color output into the Diffuse BSDF's Color input. There is also a second way to use an AO map. "eppo" recommends good ways to use AO maps here, saying the following. Something tells me you knew all of this, because you already had those two maps set up that way.

a) Use Color mix, multiply AO and diffuse texture.

b)Use AO as a Factor to mix two shaders - one general surface material, another - dirty surface.

Diffuse on top, AO on bottom: 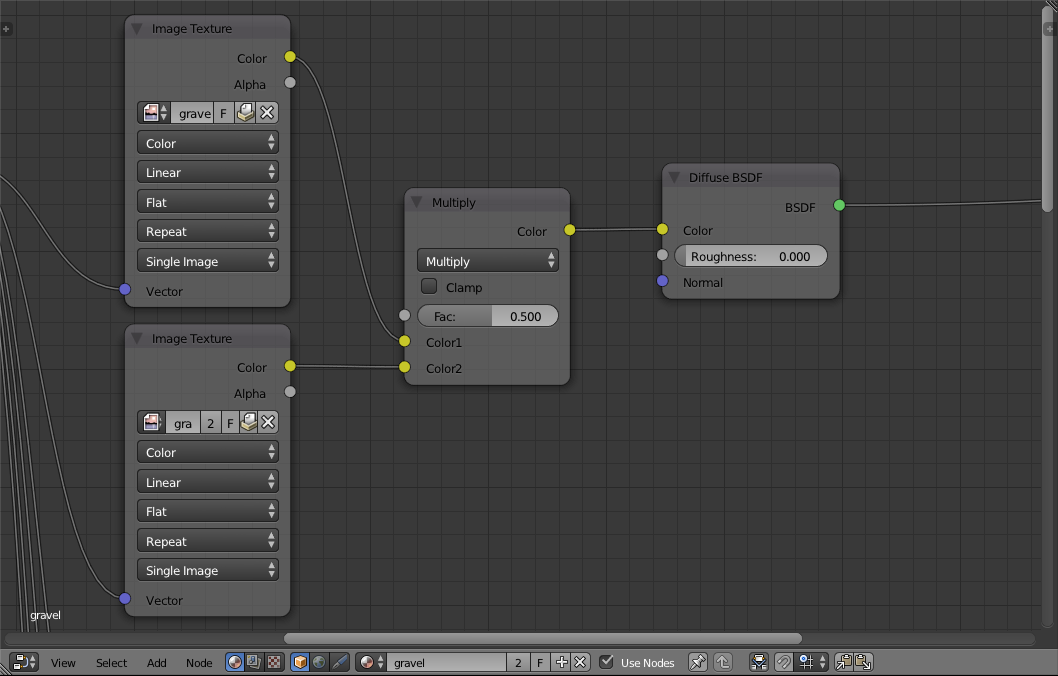 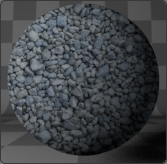 In general, choose either the Height or the Normal map. Using both gets repetitive.

The Height map get's fed through a Vector > Bump node before finally ending up in the Diffuse BSDF's Normal input. Send the image's color output straight into the Height input, and connect the Normal output to input. The Strength: and Distance: values can be tweaked to your liking, but I found the ones in the screenshot below to be effective for this texture. BlenderGuru has a good talk about bump mapping here.

The normal map can be combined with the bump map, but perhaps not quite how you think.

First, add a Vector > Normal Map node. Make sure it is set to Tangent and connect the two color in/outputs. Set the Strength: value to 0.6 to match the Bump node. I figured out how to use the Normal Map node here. 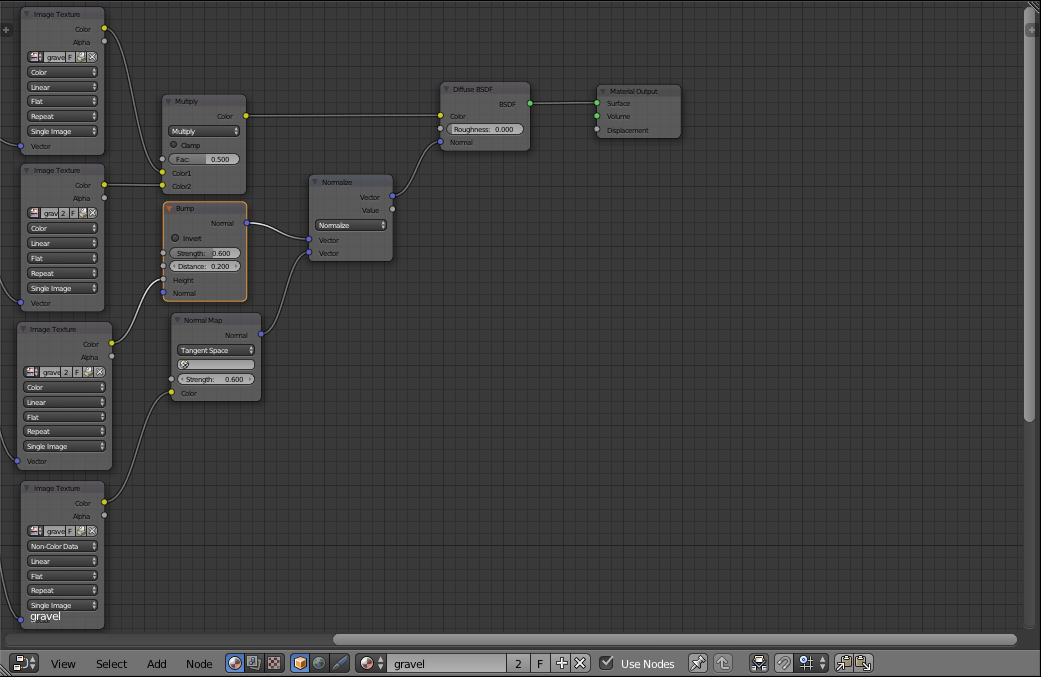 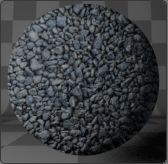 This map can be used as a fac in a Mix Shader between everything created so far and a Glossy BSDF with a Roughness: value of 0.1 (don't forget to plug the Vector Math output into the Glossy BSDF's Normal input). However, I found it effective to first run it through a MixRGB node set to Multiply. The fac should be 0.7 and the bottom color, black. 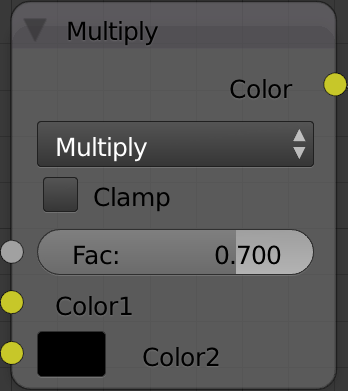 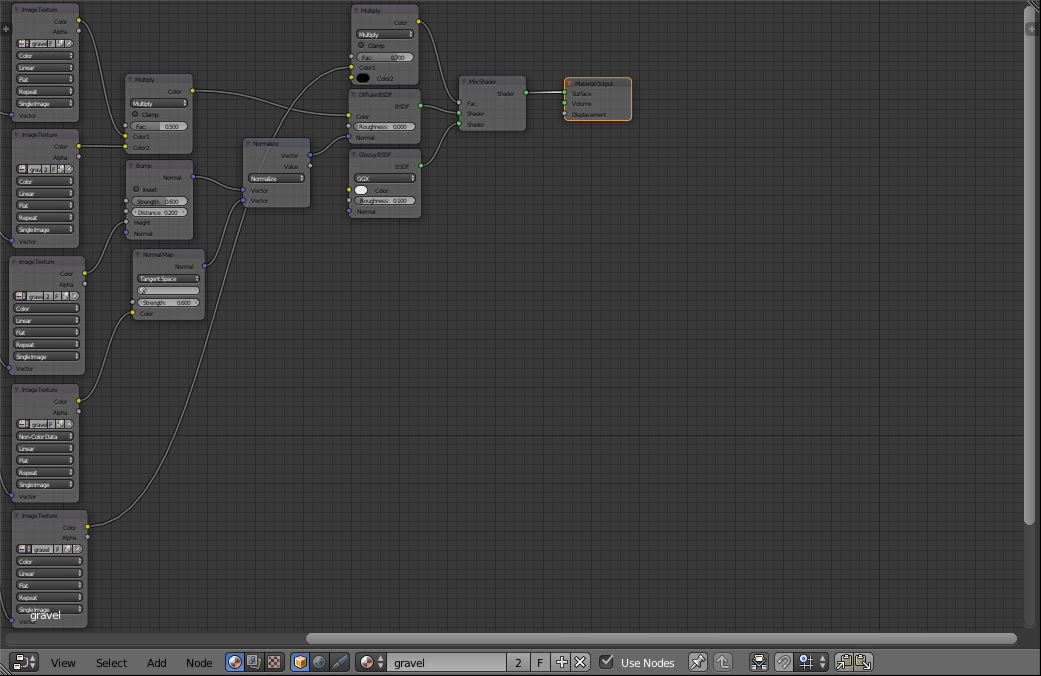 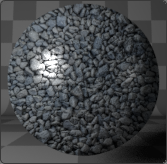 I'm going to guess the last map is a Specularity map and not a Self-illumination map because rocks don't generally glow. :)

Simply connect the color output to the Roughness: value of the Glossy BSDF node. You can read more things to do here, but I thought that this was the best for this particular situation. 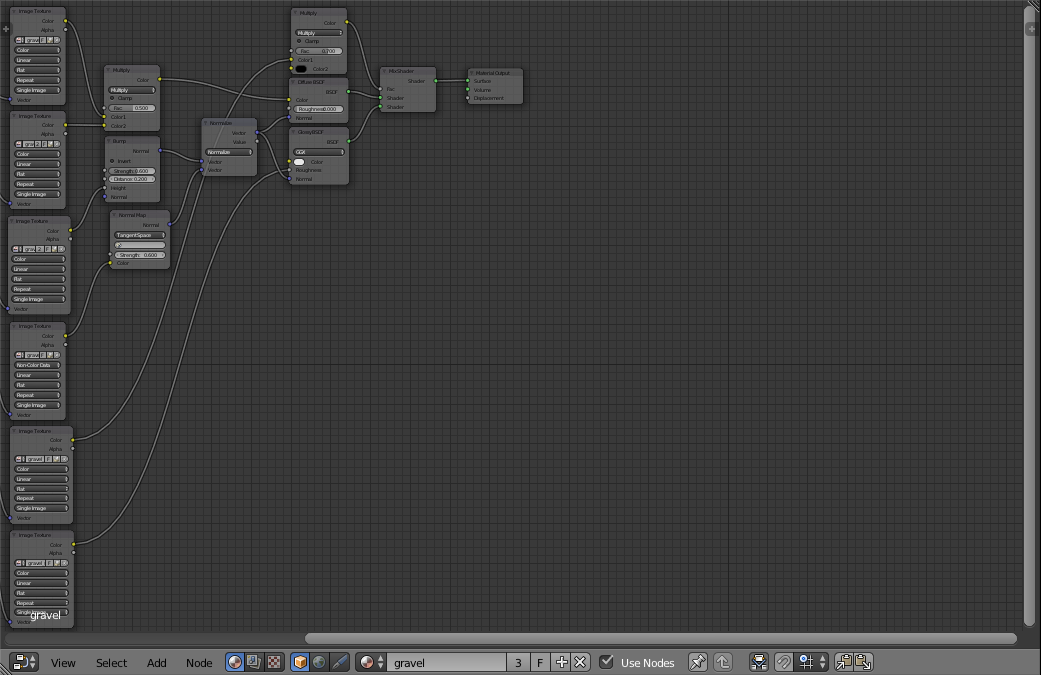 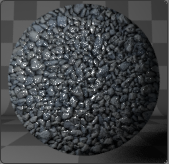 Not the answer you're looking for? Browse other questions tagged cycles-render-engine texturing materials nodes pbr or ask your own question.

2
How do I use texture maps in Cycles nodes?
2
How to compile several maps into a texture
3
How do I use albedo, heightmap and normalmap on a material?
0
How to add bump
2
Where should the different downloadable texture maps plug into
0
How to apply normal-, gloss-, occlusion-, specularity- and displacement map on one cycles material?
1
How do i put texture from images?
1
Adding Textures to a Model?
0
How to use existing UV unwrap texture on model
1
How do you apply multiple textures at a time (see inside for more details)
See more linked questions