Making first intricate mesh on my own after tutorials, need some pointers

I have done a number of Blender tutorials and feel confident in making my first complex mesh. I am attempting to model a drum machine that I own. It's almost all simple shapes, nothing with a lot of contour or texture, so I feel confident about this as a first project. I am using background images from renders that the company use as promotional photos as I model, so I know everything is roughly to scale.

I am not wanting step by step directions from anyone, but rather general tips and advice to help me move forward. I have done tutorials that are more complex than this, but obviously I wasn't using my noggin for those :)

The drum machine is an Analog Rytm

I have created the body and faceplate as separate objects. I have modeled the nuanced beveling that the body case has under the faceplate through subsurf + mean crease. The faceplate also has a subsurf modifier. I created the drum pad indentations with a mixture of loop cuts, mean crease on certain surfaces and extruding them downward to make pockets. I am running into a road block on how to progress next: my idea was to tackle the sixteen buttons along the bottom 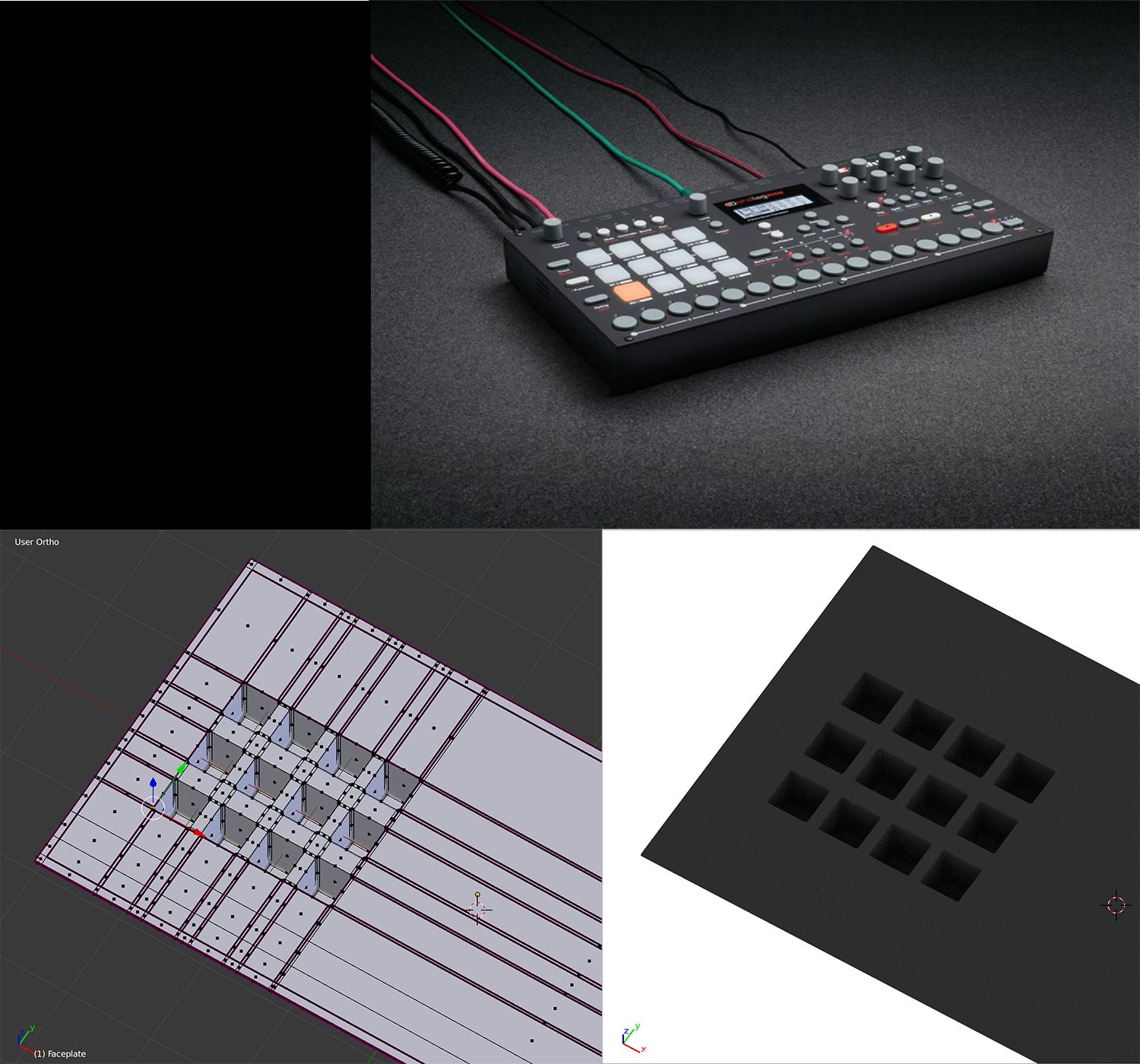 I am wanting to clear up the subdivisions that using loop cuts has created. When I click on edges I want to clear and use "dissolve edge", it removes the edge but it also turns the faces into warped textures that I can not use loop cuts on anymore. Here is a small screenshot that illustrates what I mean. From what I've seen on other forum posts, dissolving the edge is making that face no longer a quad so its unable to interact with loop cuts anymore ... do I have that right? 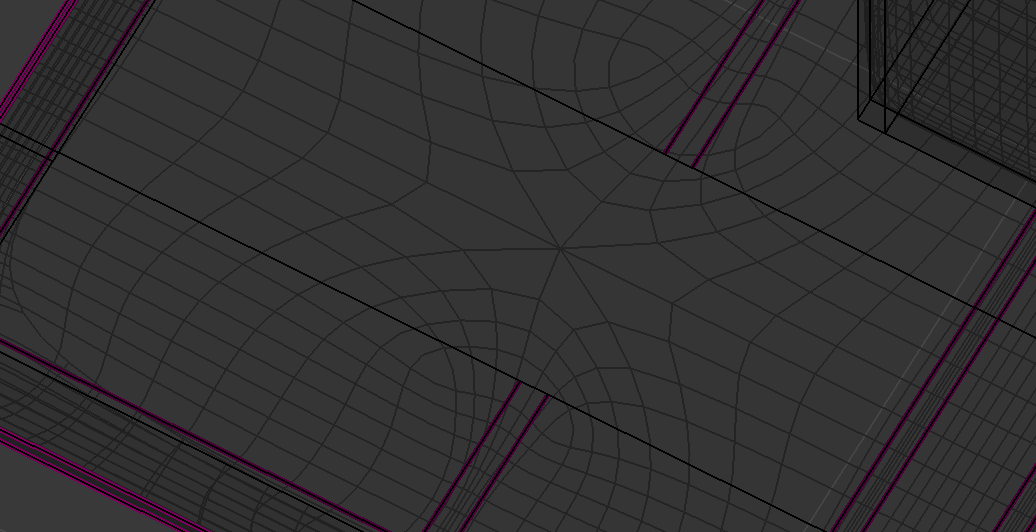 My dilemma: how do I keep cutting into the faceplate to make room for the buttons in a way that won't make the faceplate increasingly difficult to work with? Also, what would be the best way to make circular + oblong cuts into the faceplate for the rounded buttons? Also, have I gone about making the faceplate the wrong way entirely? I was basing this off of a laptop tutorial I followed since it handled building the keyboard in a very easy way, and since this has a number of buttons it seemed like a good guide to emulate

One element of the eventual solution might be to model each button group as its own mesh and then join the different button groups into a complete object at the end of the process (and keep a copy of the separated versions in a second .blend file in case you need to make some tweaks).

Loop cuts are not the ONLY tool available to you. Subdivision (of faces or edges) can be of considerable utility as well. However, it can lead to inconvenient temporary situations if you do things in the "wrong" order. Expect to do things inefficiently for many many tries until you get a feel for the "right" way to do things. It is just part of the learning process.

Yes: non-quads can be inconvenient when dealing with subsurfs. Their problems are mostly concealed when they happen to be coplanar will all their neighbors, so you can exploit that.

Another thing you can exploit is that loop cuts try to be straight across, but you can relocate some of the edges of the loops in another part of the mesh to deal with different button dimensions or spacing.

Since the plate is mostly planar with wholes have you considered using a Bezier Curve object instead.

It will definitely not give you a clean topology if you later whist to subdivide or unwrap, but will sure be easier to work with for meshes with a lot of wholes.

It's advantages will become particularly visible once you get to the round buttons part.

It will also allow you to create a non destructive beveling for extra detail, and you wont have to worry much about the top and bottom topologyor tessellation to match loops. 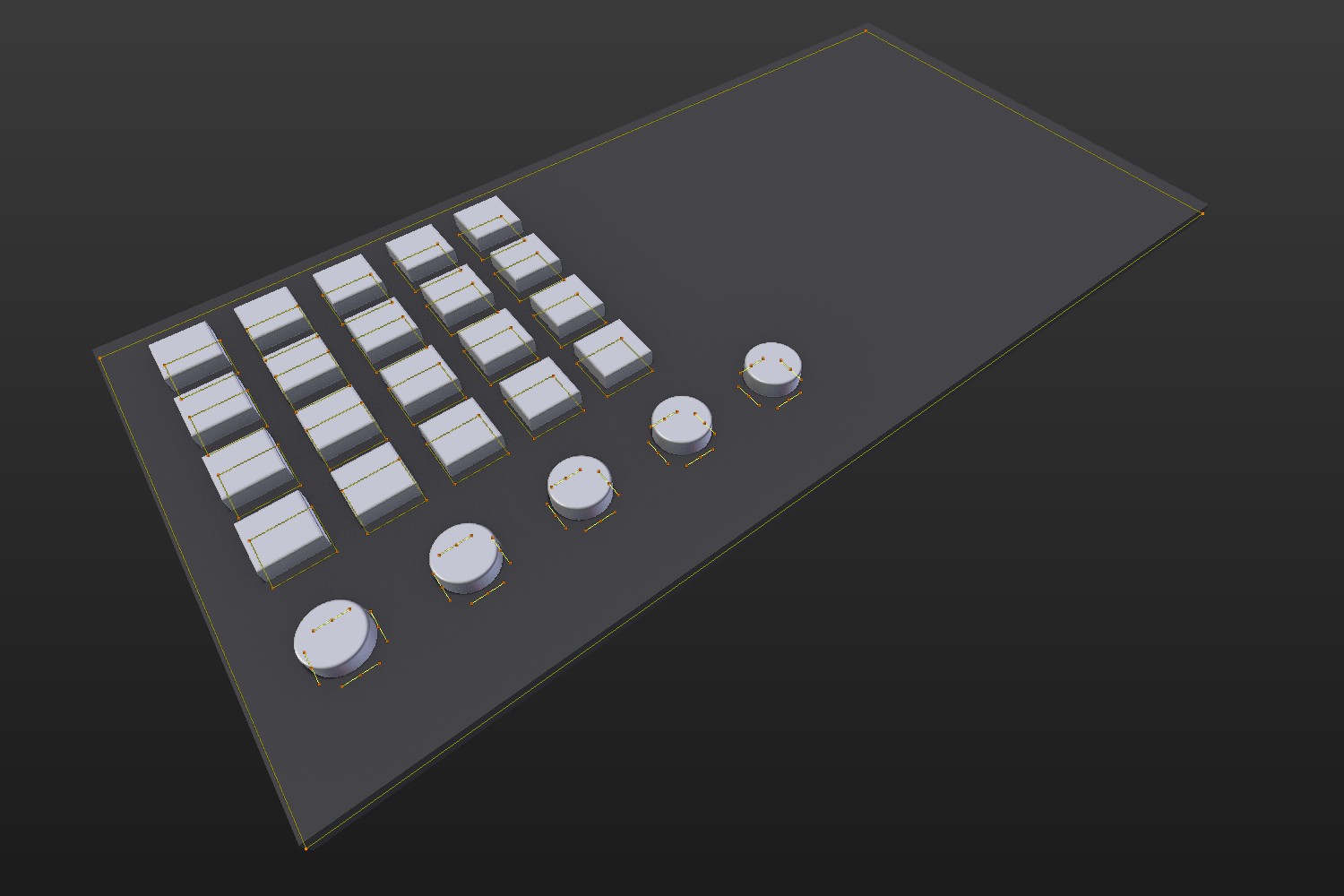 Have in mind that it may cause trouble later if you plan to subdivide, use multiple materials or unwrap your mesh though, otherwise it could be a cleaner modeling alternative.

Many ways to do this I’m sure. I started in Top View with a plane the width of the space between two buttons and the height of the overall model. Tabbed into Edit Mode and added three vertical Loop Cuts in the center of the plane by pressing “CTRL” + “R” Left Click then Right Click. Then scaled them in on the “X” axis establishing the width of the button. Then added two horizontal Loop Cuts to establish the top and bottom locations of the button and also forming a square. Then added one more horizontal Loop Cut in the center of the previous two Loop Cuts. 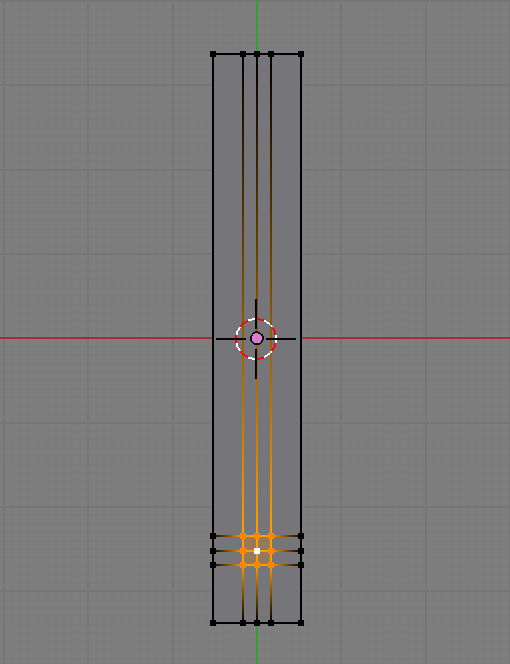 Now select the five vertices that represent the button and press SHIFT + ALT + “S” and drag your mouse to change the square shape to a circular shape Left Click when done. 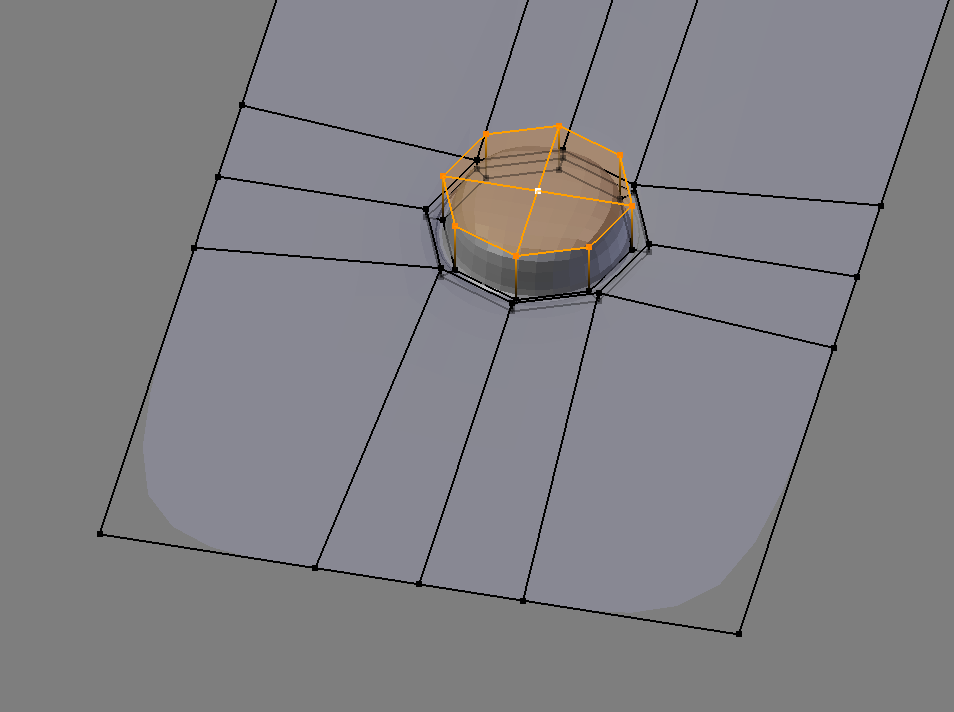 Add Loop Cuts to tighten up the corners.

Add an Array Modifier and move it to the top of the modifier stack set the count to 16 and check the box next to Merge. Add a 4 Loop Cuts around the button and bring them close to get rid of the stretching. There will still be a slight amount of stretching above the button. You can add another Loop Cut above it now or wait until the next steps where you’ll be adding more anyway. 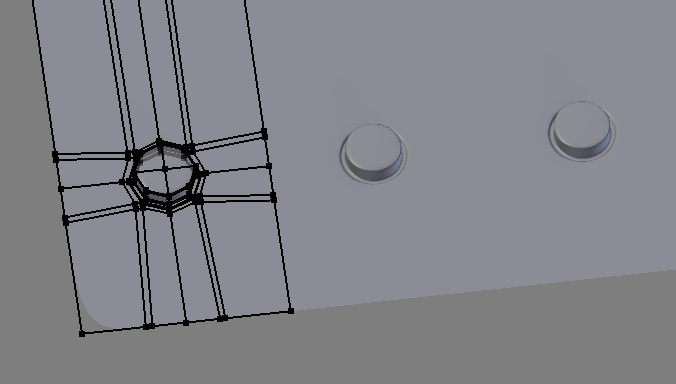 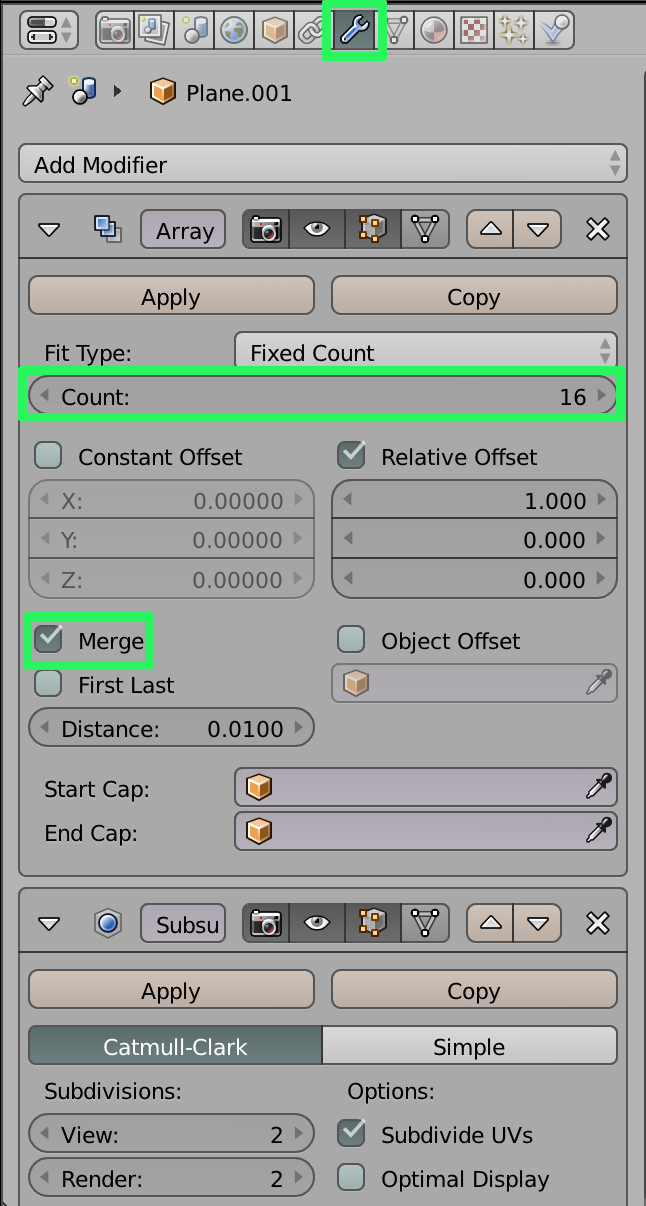 Tab out to Object Mode and select Smooth Shading (It wont hurt anything if you want to do this sooner).

Note: I usually make a duplicate of the mesh (SHIFT + “D”) and move it to another layer as a back up.

In Object Mode apply the Array Modifier the tab back into Edit Mode. Select the left edge and press “E” > “X” extrude it left to create the left edge of the model Left Click when satisfied. Repeat this for the right edge. You may need to add loop cuts around the edges to tighten up the corners.

You can then add additional edge loops and reposition them in the locations of other buttons and knobs as Mutant Bob mentioned. 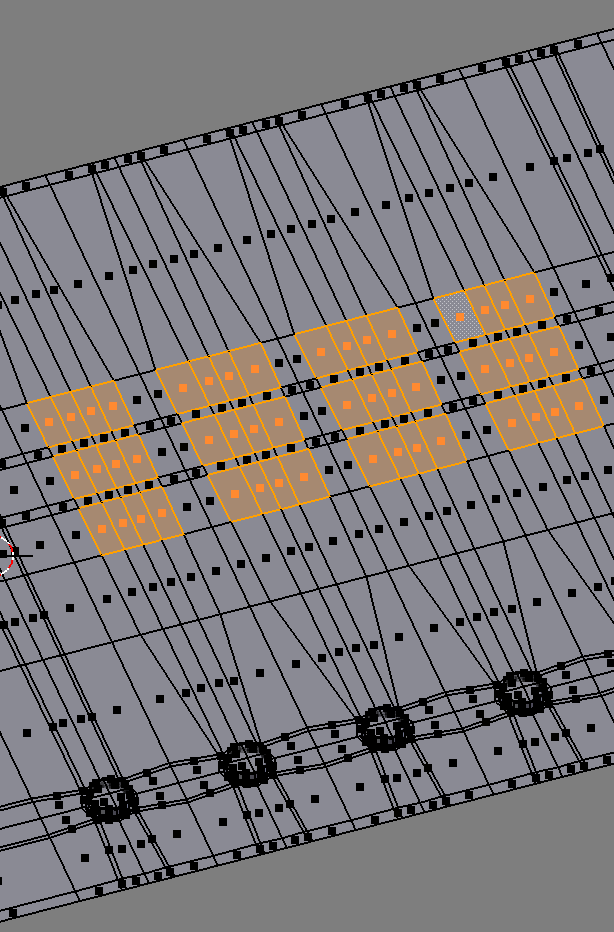 6
Billions of loop cuts
2
Crisp edges on subsurface modifier
0
How to fix radius on particular spot using subdivision modifier
2
Mean crease vs loop cuts
1
How to pull up the selected edge and scale to the center at the same time?
2
How to Loop cut multiple selected edges at once
2
How to Create Indent through Multiple Objects without Using Multiple Loop Cuts?