I sat down today to try and learn animations in Blender. After a few hours I was rigging bones to simple structures, making key frames, and saving FBX files for import to Unity3D. I felt like a pro.

Then I tried Rigify. Theoretically this makes it easy to create humanoid armatures and animations.

I started with a free humanoid model I found online. After about 20 minutes of carefully positioning every finger and knuckle I was happy with the result. Previously at this point I would have let out an aggravated scream, knowing I now had to assign a vertex group to every bone - however not with Rigify! I was all ready to test out this beautiful feature. So I select my armature and I hit Generate. The result was... disastrous. 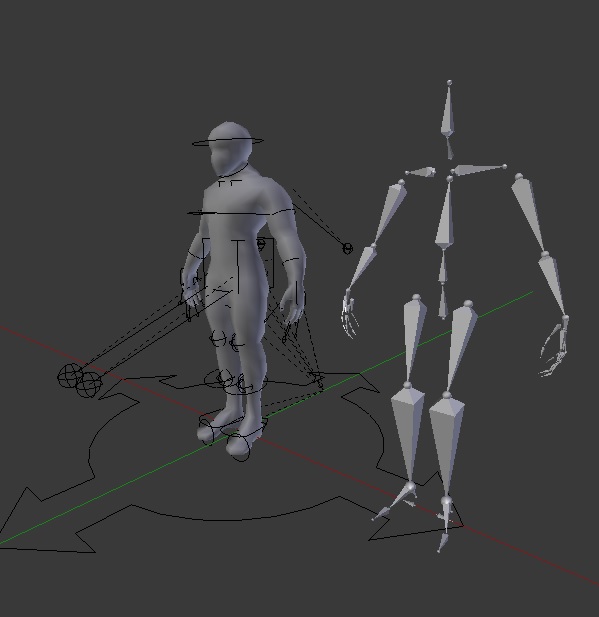 This looks nothing like the beautiful armatures in all the Rigify tutorials and examples. Rings were out of place, the hips are 8 feet in front of him, there's some weird convergence of bones behind him on the floor... I don't quite know how this happened, but I figured - hey, I'm not the Rigify expert, right? Maybe it's supposed to do that. So I tried to select my rig so I could attach it to my mesh. 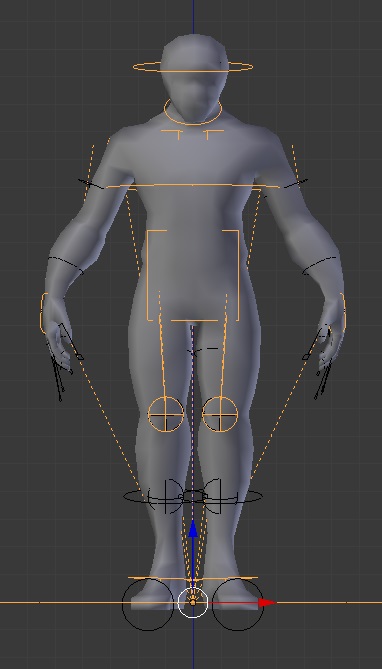 It only selects part of the rigging instead of the whole thing. That's... scary. I used the B shortcut to select the entire rig and tried now. Select the rig and the mesh, make sure the rig is the active selection, hit ctrl+P, and... there's a new menu item? 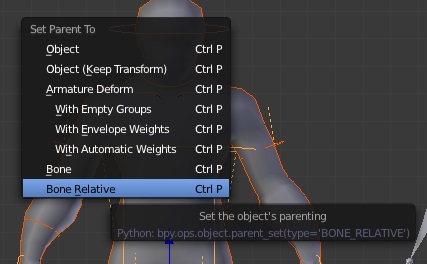 What on earth is "Bone Relative"? No matter. I'm not selecting that, anyway. So I click "With Automatic Weights" like a good little lemming. This should connect the rigging to my mesh, right? OH GOD WHAT ON EARTH- 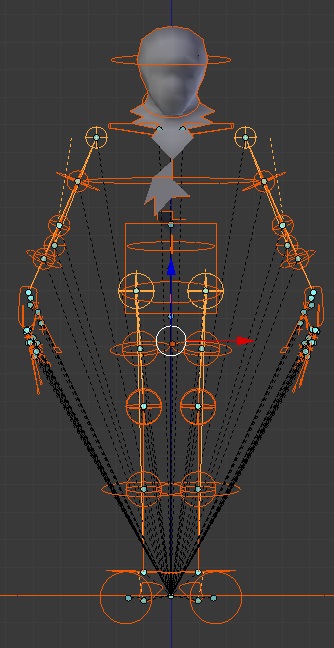 So my mesh has committed suicide. It's not quite seppuku, as that requires you have a stomach through which to ram a sword. It completely removed the stomach. And the legs. And the arms. It was like a self-dismemberment.

To my surprise, the rigging still worked... kinda 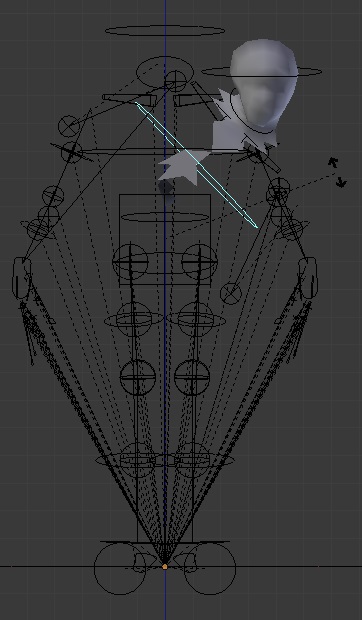 The few remaining faces move as one would expect. I wasn't really sure what was going on, if this was successful or not, so I figured I may as well import into Unity3D and see what happens.

Now with my previous experiments in Unity I was able to select the armatures in Unity and manipulate the model manually. This was the expected ability with my new mesh: 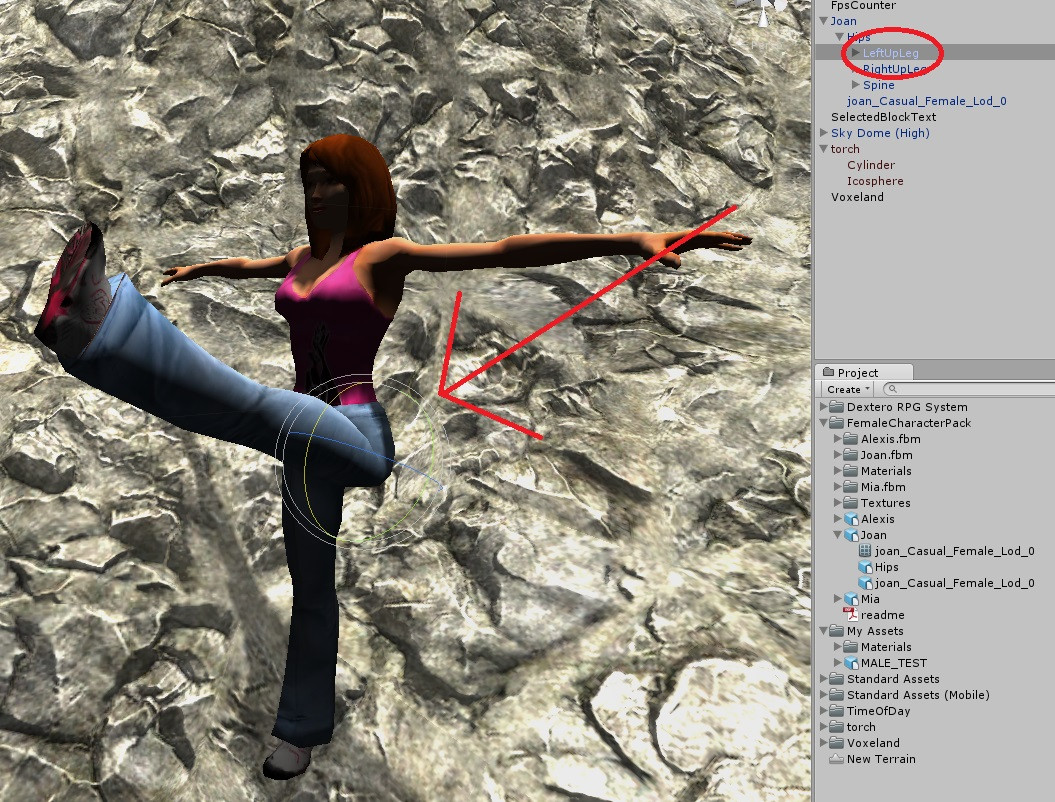 So we import our test asset to see what will- well, this doesn't look promising

Attempting to import the character to my scene caused Unity to all but freeze. It now takes 3 seconds for any mouse click or button press to register. What on earth is going on here? I fight through the pain. It'll all be worth it if I can make it work. I had to destroy everything in the scene and only add this one character to be able to move the camera, and even still it's extremely laggy. Two things seem amiss, though... 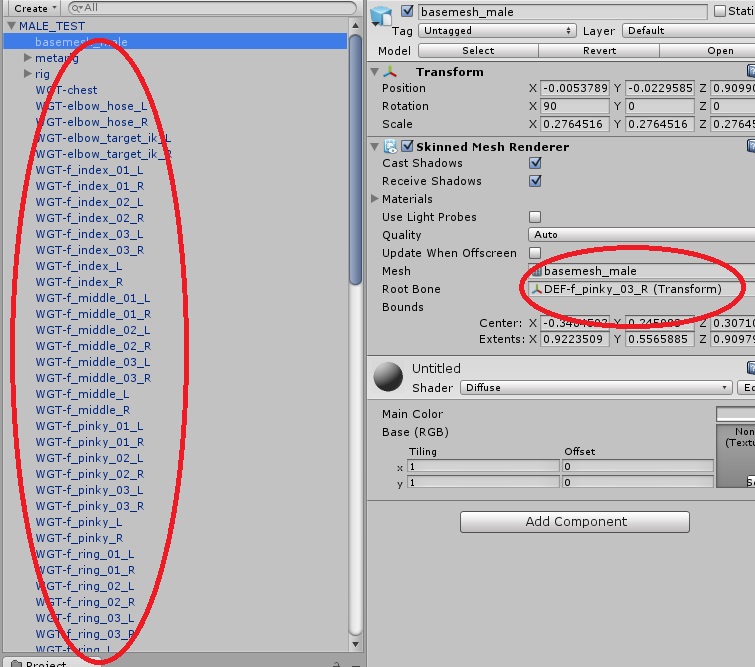 The root bone is.... the pinky? Also, WHAT ON EARTH ARE ALL OF THESE?

Clearly I'm a little bit lost on how to use Rigify, or what I did wrong, or why it's making rigs that don't make sense, or how to use the rig it creates, or why it isn't bonding to the mesh,... or anything... Can someone point me in the right direction? I've tried Googling all night and every tutorial and video just makes it look easy. You line up the bones, hit Generate, and voila - you have a perfect rig that works like a charm. No dice.

Go into Blender's User Preferences and on the File menu, tick 'Auto Run Python Scripts' on and regenerate the rig. This will fix half of it missing. However, when you move into Unity, you'll notice that Rigify creates a lot of controllers and widgets, that while very helpful in Blender, are rubbish for Unity. I suggest taking a look at the Rigify to Unity package in the Asset Store as well.

Game engines have their own ways of doing things. Operations and features that work in Blender do not always translate well when carrying them to a game engine (such as Unity3D). The reason is that game engines have a lot of the same systems that blender has. Unity3D has its own particle systems, animation system, materials system, etc.

If your goal is to use 3D models for games, I would focus first one what the game engine supports. There are lot of things in Blender that just won't work when you try to open it up in Unity.

I would also spend a lot more time looking through the documentation from Unity3D. Here are some simple guidelines importing blend files. http://docs.unity3d.com/Documentation/Manual/HOWTO-ImportObjectBlender.html

Here is a great video that helped me out when doing animations from Blender. http://cgcookie.com/unity/2011/12/05/exporting-characters-from-blender/

I do game modeling with Blender to Unity. You will find that 90% of the features in Blender can't be used because Unity just can't import them in. Learn what the game engine supports first, then use the modeling program appropriately.

Not the answer you're looking for? Browse other questions tagged python animation rigify or ask your own question.

5
What are the advantages of Rigify versus MakeHuman's MHX rig?
1
How to update/overwrite an existing rig with Rigify
0
Weird deformation after exporting Rigify from Blender 2.8 to Unity
0
Rigify and Root Motion in Unity. Latest Version not working?
1
Animation in Unity look different than in Blender - rigify addon
2
Blender rigify character animation to Unity looks so weird
0
How do the visual control bones work in rigify?