A while ago, I was searching for a leather texture online, when I came across a thread on Blender Artists where someone had made an extremely respectable leather texture with just Blender nodes. This was the result on the material preview sphere: 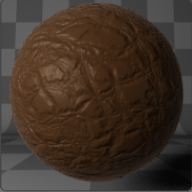 The only actual texture they used was a Wave texture. The rest was just Mapping nodes and other assorted math and vector converters. The person included two screenshots, from which I reproduced created the described node setup. The one modification I made was to add a Mapping node immediately after the Texture Coordinates node because I needed the texture for an elongated cylinder at the time. Here are the two shots:

My question is: How does this node setup actually work, and could the logic be employed to make other textures? Does anyone know of other examples that exist or could be created (would love to see them)?

Also, as I realize this could be a pain to create (it was for me), I am including a .blend file with the node setup and some other gizmuhwhichets that I built at the time.

The way this works is definitely able to be used again if you understand it. This is a procedural texture, and there are many like it. I've created procedural textures to generate things like stone pavers, bricks, rock walls etc.

The first thing you'll notice is that the output from all the Mapping and Leather nodes only connects to the height map of the bump node. So all that work is simply creating a scale of heights (ideally 0-1 values) that creates the ridges of the leather. After that bump is created, the mixing of lighter and darker colors based on fresnel is a common method of softening fabric-type materials around the edges; it gives the softness to the material.

The heart of the work is in the "Leather" node. This node starts with the texture coordinates of the Material, compared against a rotated 90d version of those coordinates (Bands 1 and 2 in each Leather node). Each of these is assigned a wave pattern, and then these are merged. So imagine for a second that you took two grayscale wave textures, going in different directions and overlapped them. It would give you a fairly complicated lattice of lights and darks. I think the wave texture was chosen because of the linear quality of the "cracks" in leather and the lines of the wave (as opposed to a Noise texture or other). Some distortion and slightly different scales are applied so that the pattern is given variations. The Power and ColorRamp nodes are used to amplify the values from the wave node (Power) and alter the values to make the waves more crack-like (more intense ridges). Apparently, as this was being created, the cracks were a little too intense, so the creator put a 40% invert node to soften the ridges a little. The Gamma node actually does a similar thing again.

Try connecting the color output from the Darken nodes (or the Leather nodes) straight to the Color input of the Diffuse shader (and remove the Normal input and mute the Mix Shader) to see the actual values of the bump map that create these cracks.

This material copies the Leather node process with three different variations of rotation (30d 45d and 0d) and each has slightly different scales and distortion, which makes a very interesting crisscrossing crack pattern. The Darken modifier of the mix node is used to combine these because it takes the lowest value of the two input values, meaning it won't compromise the depth of the cracks when combining.

I think whoever made this had a general idea of where it would go, but spent a lot of time just tweaking values and trying things out. I bet you could create some pretty interesting materials by doing the same!

Does anyone know of other examples that exist

4
Pointers to node groups?
5
Mix two materials in the Blender Internal Materials Nodes
11
How to repeat an image which uses Sphere mapping in Cycles
1
Node Cloning / Duplication
2
Layering materials on an object based on texture painting
0
Customizing array objects with shared material
0
What's wrong with my node setup for PBR materials?
1
A Black Material Problem on imported DAZ Obj materials