How Can i make save and load for bge

I probably need the help of a Python script to make this work.

What I want is: The player will be able to save and turn off the game, but continue from where they saved when they next log in. Items such as gold, weapons, etc. must be stored.

It feels like something hard to do and I am not managing to figure it out alone. Although I love problems and solving them, in this case I need help.

I know that BSE People should not ask more questions.

Is this stupid or must I have several Scenes in my game. Say that my player goes into a house. Should the house then be in another Scene, or should I move camera and player to inside the house from the same Scene?

Any advice would be very helpful. I have no one near me whom I can ask.

you didn't specify what exactly you want to save :(

I added two custom properties to the default cube :
-an integer to store the score
-a string to store the player's name 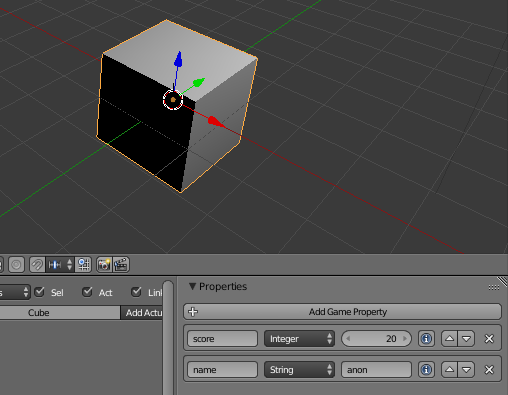 for testing I will use the key S to save our properties and L to load,this is done by calling their respective method that we will define inside a script I named here script.py. 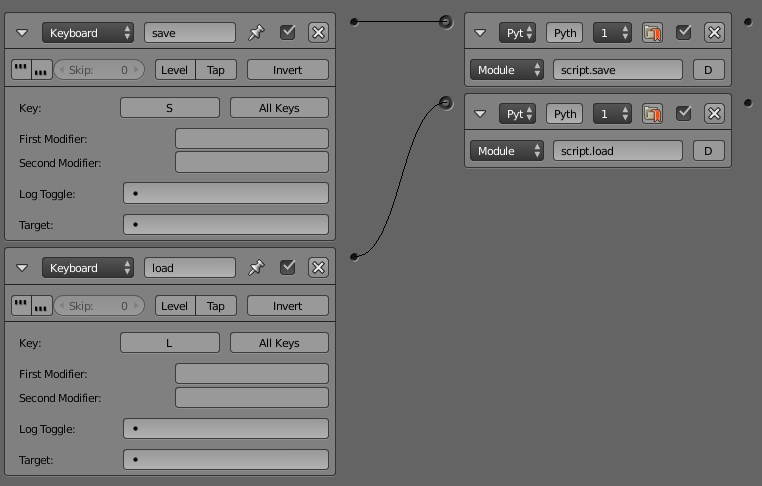 so , now we just have to write the script. in the text editor add a new file , I named it script.py

Convert game states into store-able data and back.

This is just a very simple example demonstrating a basic storage system. When you have more data, you will need a much more complex data structure to keep all the states of all the different objects.

You do not need to use bge.logic.globalDict. You can create your own storage (similar to playerStorage).

Do not store any references to data that can't be persisted such as KX_GameObjects, KX_Scene, Vector. You need to extract the data that can be applied to a different object later.

Beside game states you need to store enough data to uniquely identify target objects for later restore. In the example it is the key "player" assuming this data is from an object called "Player". [Object names are not unique, so you need to store additional data].

Is the reverse of Store.

Be aware the objects you stored the data from are not necessarily the same objects you will restore it to. If that sounds confusing: Imagine you restarted the scene. This means the original scene is gone and all of it's objects are dead. But you created and loaded a new scene with new objects that look the same. But they are different object.

The objects do not even need to be equal. E.g. you stored the data of a walking character (e.g. health). Then you restore the data to a vehicle as the character is sitting inside the vehicle.

Identifying objects can be tricky. In most cases the object name is sufficient enough.

In this example we assume that data from storage "player" should be applied to an object called "Player". The above operations assume these data exist. Otherwise the processing will return an error. You need to apply a proper error handling.

Store and Restore are useful within several situations:

There are several different ways to implement such a system. A very simple one is to use the build-in Persistence via GameActuator:

The GameActuator in Save mode marshals the data from bge.logic.globalDict into a file called <your-blend-file's-name>.bgeconf.

You simply activate the actuator and the BGE persists the previously stored globalDict to file.

Be aware this overwrites any previously saved data!

Be aware: the complete globalDict will be overwritten! A missing .bgeconf file will show a warning in the console.

Now you have all the aspects together. You always need to consider the timing. This means you better store before save, restore after load. You always have the option to skip the persistence (e.g. on scene switch).

The above examples are very simple. You will need to establish you very own storage. You might even want several different storage objects.

Always be sure what you store where.

Do not mix storage with other purposes (e.g. managing an inventory via globalDict). This will sooner or later result in heavy design issues.

The python part can become quite a lot of code. I suggest you do some training first to be able to manage that.

There are other ways to persist data. E.g. you can pickle the data via Python and save the pickled data to file. This supports more data formats than marshalling. E.g. you can store custom classes.

1
How can I save/load the state of Blender games?