Where are some places to get reference images for modeling?

I'm a newbie. I've gone through a number of tutorials and want to get some actual experience with modeling. But, I don't know where to go to get good reference images for modeling with front/sides views.

Can anyone recommend the best places to find such images?

You can find some at the-blueprints, high resolution vectors are paid and need registration for download.

One site that I commonly use for references is actually Pinterest. You can find some pretty useful boards on there. A few of the medieval weapons boards I found:

I mostly use google images but for human reference http://www.3d.sk/ is very big. It is not free though. Also, 3d.sk uses a subscription payment model that turns me off.

My first choice is usually the internet. A Google image search on the keyword phrase "medieval weapons" brings up a large number of internet images of pikes, bow, battle axes, and others. While these are not plans or dimensioned drawings for the most part, a valuable skill for a modeler is the ability to determine reasonable dimensions from the image. So, for example, if you're modeling this battle axe, 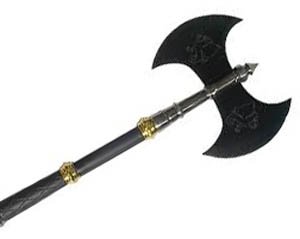 a reasonable assumption is that the handle is about an inch and a half in diameter, and if the handle is an inch and a half in diameter, then the head is 10 to 12 inches across from one edge to the other, and about six inches in the dimension parallel to the length of the handle. Small shields will be somewhat bigger than the length of the forearm, so about 18 inches or larger. The exact size of a particular shield was probably keyed to some extent to the size of the warrior carrying it. A small person probably carried a smaller shield than a large one.

If you are interested in modeling weapons from a particular area, for example, the island of Malta, do an online search for a museum or art museum in that area using search parameters like weapons medieval Malta museum. Wikimedia commons is a good place to look, too, Whether or not an internet search yields useful results, one can also try the Google books site. Many older books, including (I expect) those on military history are uploaded in full, and can be freely downloaded. Some of these might have useful images.

Dead Tree books and magazines on the your subject are also a good source. I know I've seen books on military history that I'm sure contain images that you would find useful. In the US, even if you live in a small town, and your local library does not have much that is useful in its collection, I expect that there is likely facility to allow you to borrow books (and magazines) from the State Library, or from the libraries of some of the larger cities in the state, or the libraries from the State Universities through inter-library loan, though these days this might cost a nominal fee.

Don't overlook fine arts books, either. I have a copy of a book on the art of Heironymous Bosch, a Fifteenth century painter, many of whose surviving paintings are in Spanish museums, and I recall that his paintings include paintings of weapons, which even though they're small, show proportions of the weapon to the size of the person wielding it. But I've also seen books containing images of swords and other medieval weapons, from which you could get at least one view. And military subjects--battles and warriors--are commonly the basis for paintings and sculptures, so these can be sources of material for modeling.

As far as reference images for for other types of modeling, again, the internet is your friend. There are a number of digital photo archives available on line that do not seem to be referenced by Google, or other data aggregators. Most every state, and many regional library associations have such archives. Also individual university libraries will often have significant collections of photographs that can be used, if not for reference, at least for inspiration. Wikimedia commons may be worth consulting, too, although I generally find that this is generally included in data aggregator data.

There are plenty of resource available online. Here are some,

Pixabay.com Search on Pixabay. Which is copyleft and fee-to-use website for sharing photos, illustratons & vector graphics. Here it is possible to find some good reference images

textures.com: Contains texture images which are also helpful are references

5
Simple modeling rules to get sensible UV mapping
2
Modeling based on a reference image
1
How do you model an object (car) without all the orthographic views?
16
Tips For Modelling From Google Maps?
0
Easy Ways Of Finding Both Front And Side Profiles for Character Modelling
0
OBJ import disappears behind 'screen' when zoomed out