Subtract the weights of one vertex group from another

I have an issue with a rig (this is my first time rigging) where it requires the subtraction of the weights of many different Vertex Groups from the head (root) vertex group to make the rig function properly.

Here is an image showing what I wish to accomplish:

The result image is an inversion of the middle image. Do keep in mind that inversion will not cut it, since I have to remove more things from the head (root) vertex group other than just the jaw itself. 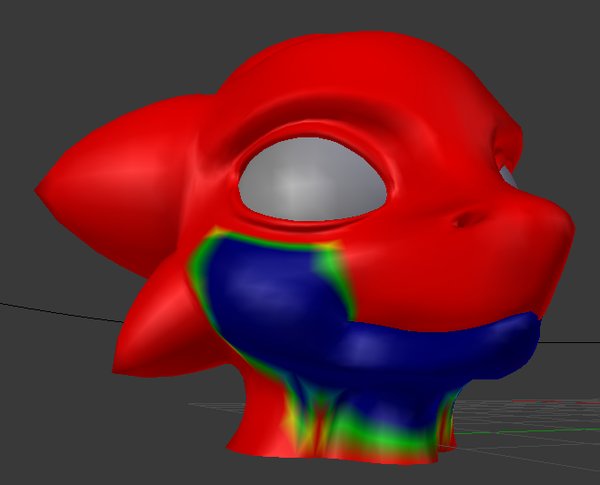 This is not satisfactory, as it removes the vertices from the vertex group, but does not subtract the weight values from it.

Google has not turned up anything so far.

Normalizing solves nothing as it still causes deformation when moving parts with Children i.e. opening and closing the jaw deforms the lower lip bones.

Removing the influence of the head (root) bone will also cause irregular behavior as well since Blender treats all weights which aren't zero as one regardless of the weight assigned due to the vertices needing a weight of one.

You can use a Vertex Weight Mix modifier.

Say you have Vertex Group A :

In order to subtract B from A, add a Vertex Weight Mix set to Subtract and to effect only group A.

Result when viewing the A Group after adding the modifier :

The data transfer function may help you.

You will have to set your two objects as they overlap. Then use the "data" button in the "Data transfer" section.

And then go to the operator options (bottom part of the first image here).

You also have an "invert" function here in weight paint mode : 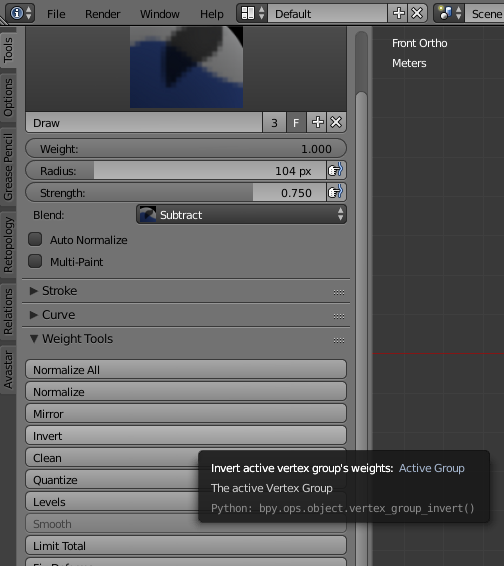 Not the answer you're looking for? Browse other questions tagged rigging weight-painting vertex-groups vertex-weights or ask your own question.

3
Cleanup Vertex Weights
1
Why is one bone distorting my mesh? Only one vertex group?
1
How does the Vertex Weight Mix Modifier Work Internally
1
Rigging mesh with vertex weights: different weights have the same influence
0
What are my options for automatically filling in a missing vertex weight group?
3
Add/Transfer one object's weight painted vertex groups to different object (identical mesh)?
0
Why does Automatic Weights paint distant vertices?