I am trying to create a material where I can place in 2 images (one with white space, and one with just an outline) where the outline gets laid over(with alpha cut out) a material/shader, that would be defined by the white space image.

I have both halves working separately correctly, but when I use a mix shader, they mix correctly but become transparent (when I want it solid). 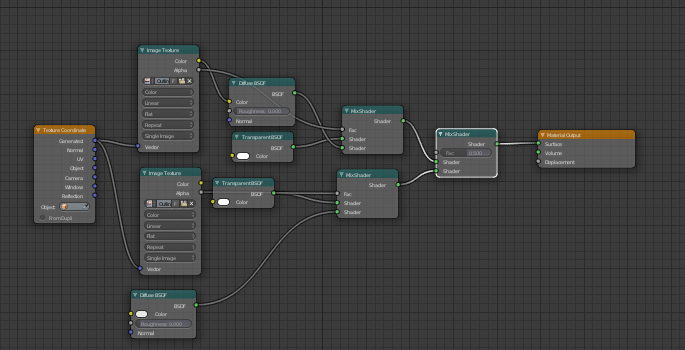 (First image is the node map used. Top image texture is outline and bottom is white space)
(second image is the output using the monkey head. There is aweful transparency over everything)

The last mix shader on your node tree is just making your shader a 50% mix of two other shaders, but not using any transparency to control the mix.

Get rid of the extra mix shader and mix the two shapes together directly: 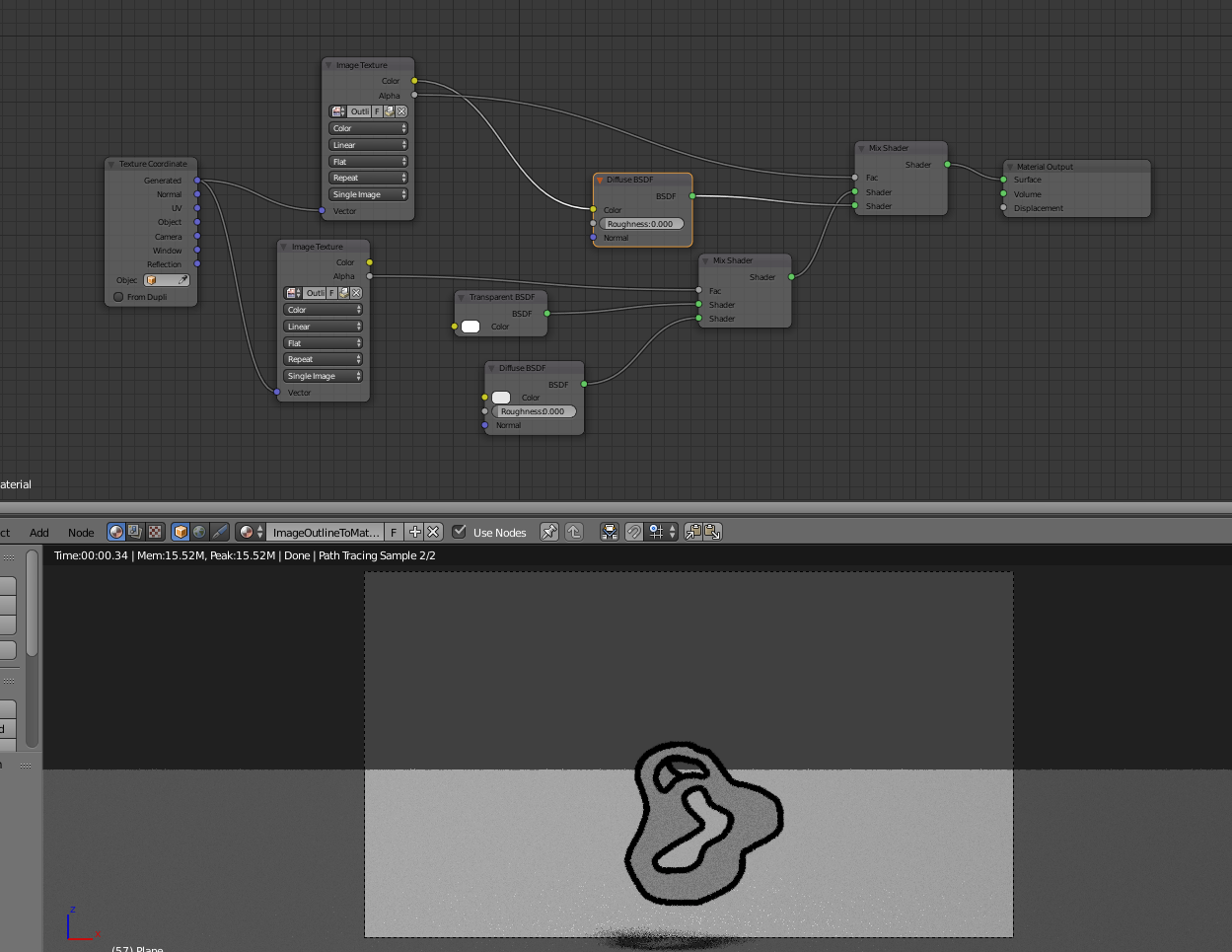 I'll break it in pieces so that is clearer:

When you are using an alpha channel you are using a black and white image to control how two things mix. White is used as opacity, black as transparency. Anything in between will be semitransparent.

If you use the Alpha channel to mix shaders, the white portion of the image will be using whatever shader is connected to the bottom socket. The black portions will use the other shader connected to the top socket. In this case Black will become transparent and white a Diffuse shader. 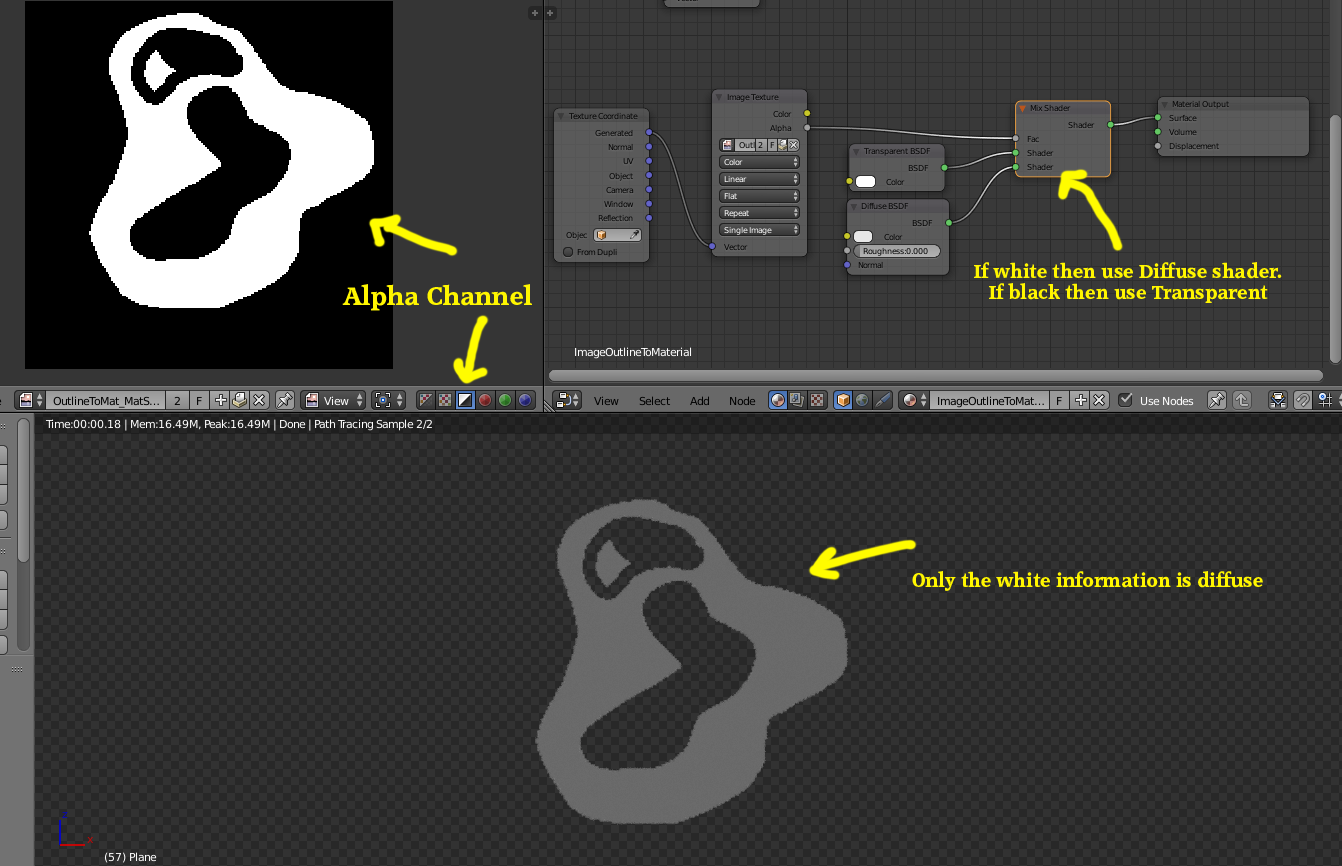 To mix the other image you use the same approach: Using the alpha channel you just select to use a diffuse shader over a material that has areas that are already transparent. 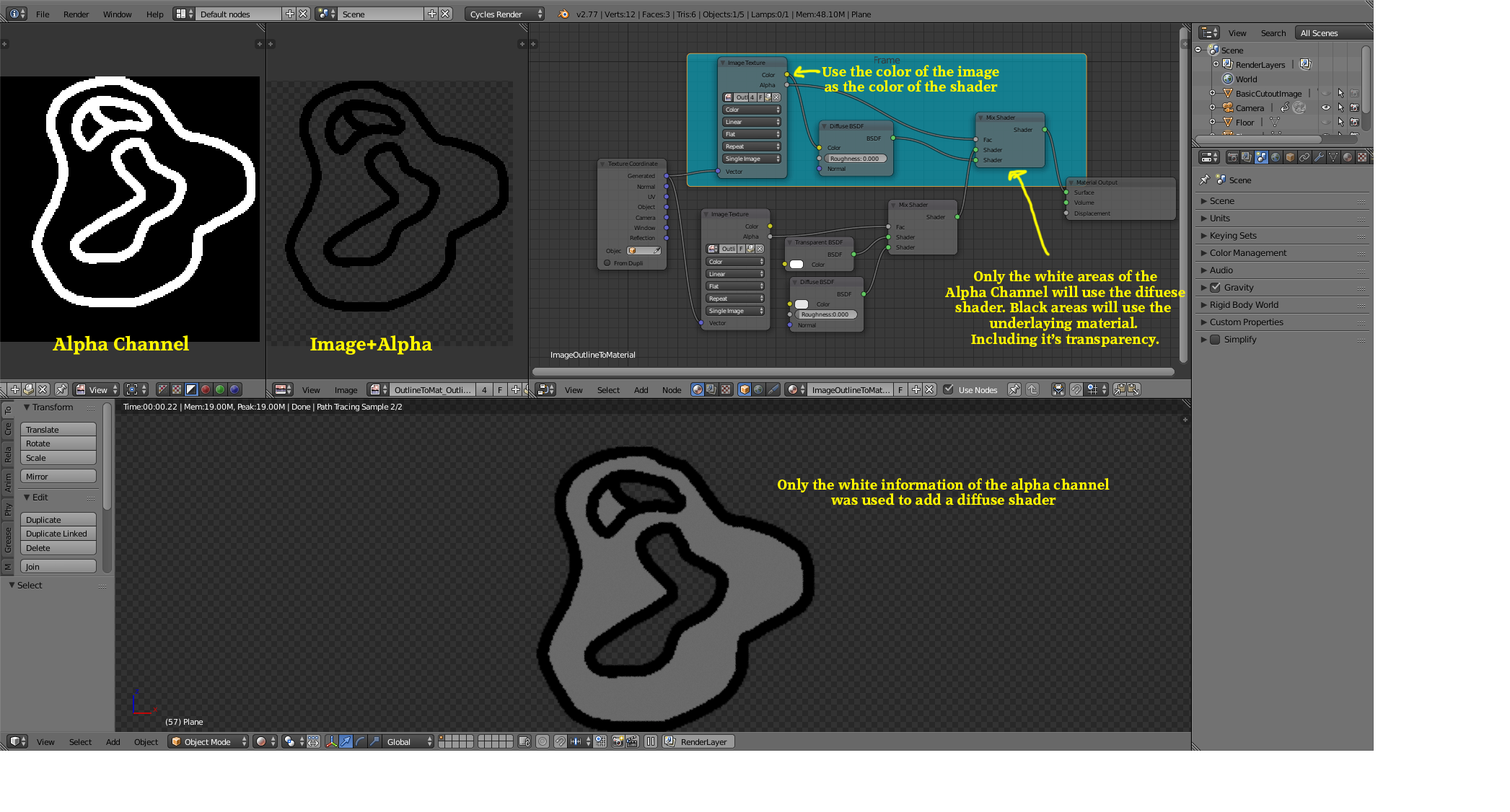 As an alternative, instead of combining shaders, just add the alpha channels to control the transparency using a single mix shader. 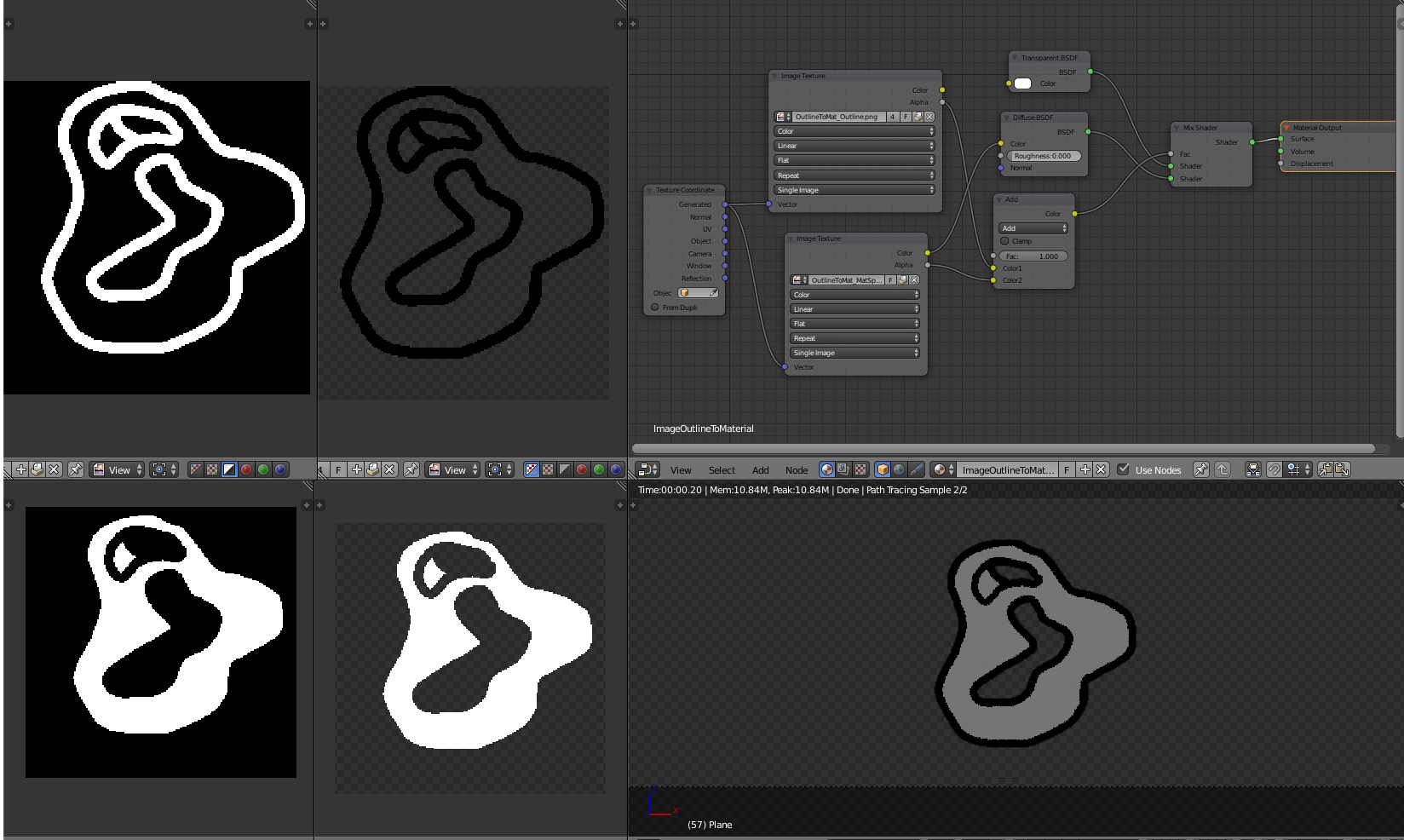 Or, keeping your current setup just plug the Alpha of the solid white space into the final mix shader: 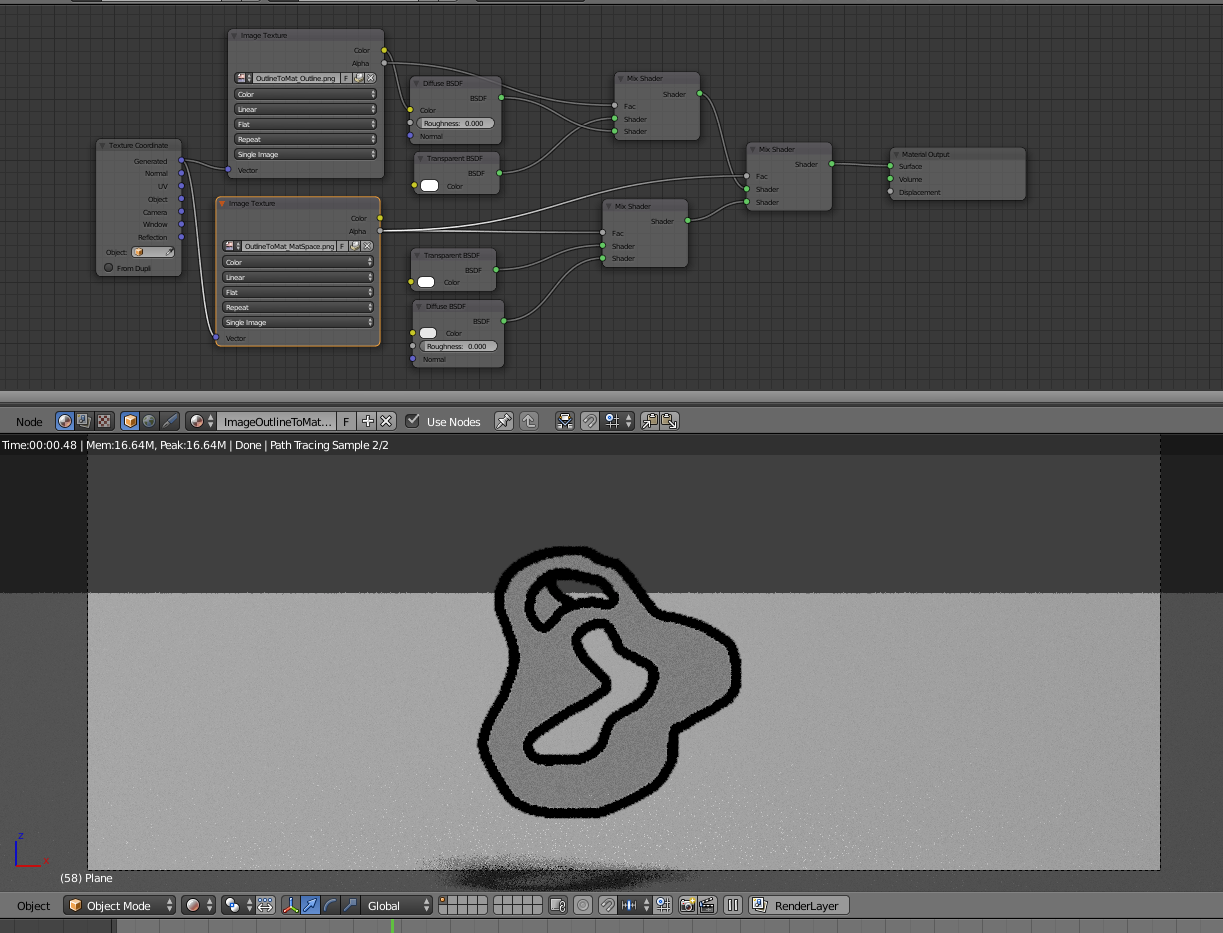 8
How can I use an image texture as a guide for weight painting?
2
How to mix 2 textures using different UV maps on one object
2
How to put an Image Texture over a material in Cycles
9
Light path Transparent/Diffuse Depth
0
How do you apply a gloss map?
0
Is it possible to have true transparency (without ghost shadows)?
2
Mix shader object (semi-transparent) causing unwanted light spots with Cycles on material beneath
1
Transparency Material Gradient not showing in Eevee
1
Image Texture with opacity map over another material