In Pose mode, my bones are stuck in rotate, and wont transform

When in pose mode, the bones on my model wont transform, they are stuck in rotate mode, though I can scale them. This problem now occurs whenever I try starting a new project. Some bones that I made earlier still work, but whenever I try to make new ones, they are stuck in rotate. It seems like I changed something in the settings, but I don't even know how to access the settings. Please help, thanks.

I found the solution! You have to click on the button shown in the photo below. sorry for my bad English I'm only 14 years old 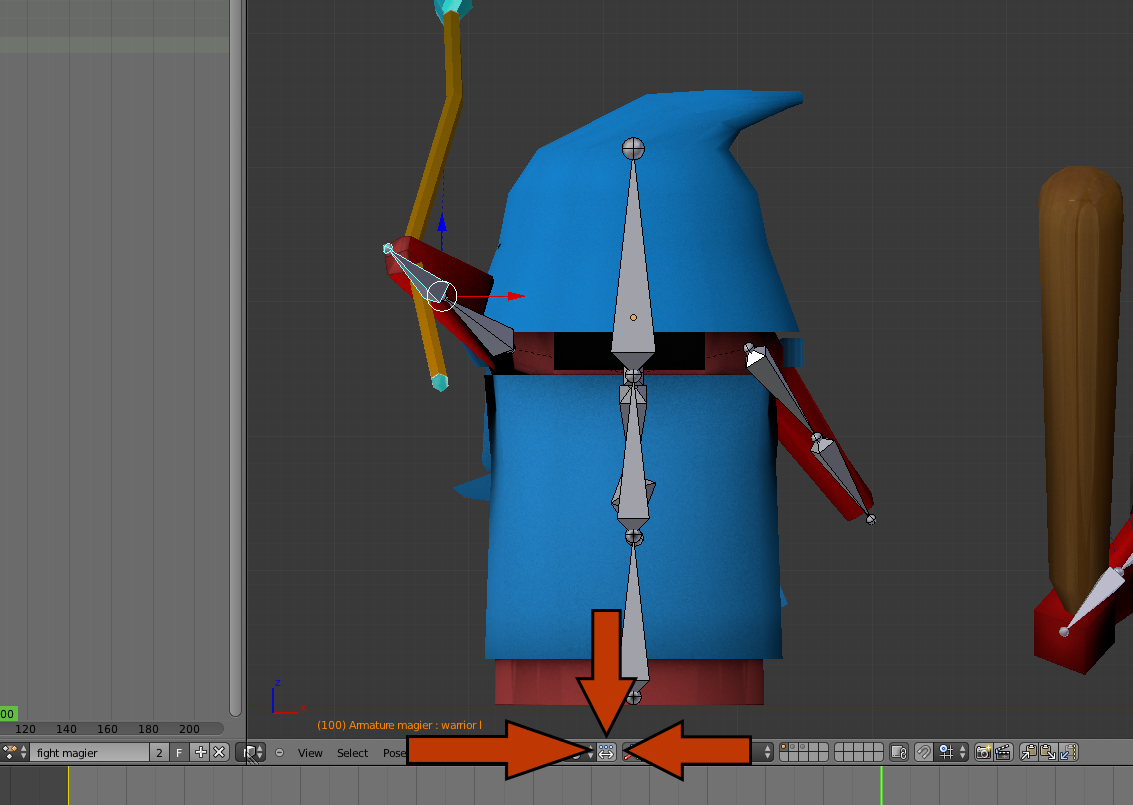 Try to check if the Rotation axes are locked occasionally.

I'm not sure if this will help at all, but I stumbled onto this question looking to solve the same (if not seemingly the same) problem in my own project.

Of course the answer to my problem turned out to be quite simple. While yours may not be so, I figure it's worth checking.

Have you cleared the parent from the bone you're trying to move?

I recently had a similar problem which turned out to be caused by accidentally activating the option to "Manipulate center points" (shortcut Alt+,). This will (as a side-effect) disable rotation and scaling in pose and object modes. It's the symbol right next to the pivot mode with the three dots above a two-sided arrow.

It's possible that you've changed a setting somewhere, but (especially if you don't know how to get to those settings anyway) I think it's more likely that you need a little more information about how rigging normally works.

One way this normally happens is if you're setting up an IK chain, then the bone at the end is the only one that will move. The bones in the middle have all been told to maintain the IK solution, which means you can't move them. This is normal.

Also keep in mind that when you're creating a rig, the idea is that they are BONES like in your body, which means that they are always attached to each other (this is not always true, but is usually how characters are done). So if your forearm can't move (because you don't have it selected) and your shoulder can't move (because you don't have it selected) then if you try to move your upper arm, it's not going to go anywhere; it's locked in place because it's not allowed to influence the two other bones it's attached to. Of course, this isn't how your body works, but keep in mind that the computer is dumb. It can only make assumptions that it's been TOLD to make, and it's usually safer not to make any assumptions, so it doesn't make a bone move until you tell it exactly how to move it, either by selecting it, or by giving it rules like with a constraint.

Although I'm using anatomical illustrations, the principles apply to any other kind of rig in which your bones are attached to each other in a hierarchy.

This sounds like bones in the hierarchy are parented with connected head/tip. There are two ways to parent a bone: 'connected' and 'with offset'. 'Connected' means the head of the child bone will snap to the tip of the parent and the two bones are joined at the junction. If you try to move one, the other will be adjusted as well. 'Offset' means the two bones are still in a hierarchy, but they are not joined at the head/tip junction. The child is free to move in its parent's space in all three transforms. This is signified by a dotted line between the head of the child and tip of the parent in edit mode.

If your bones are connected, you can break this connection without breaking the parent/child hierarchy with Alt+P and choosing 'disconnect bone'. To make a parent without the snapping, simply choose 'with offset' when you parent.

Not the answer you're looking for? Browse other questions tagged customization transforms bones or ask your own question.

0
Multiple problems: rotating, rigging
0
Which steps are missing to make simple bone animation?
1
Scaling Bone Joints in Envelope View
3
Animate Property gets activated whenever I move an object
1
Can't select bones in pose mode
0
How to align bones so their rotations are the same?