I'm using opacity animation to make an animated text fade out. It's working in the Video Sequence Editor, but when I render the video it doesn't work; the text doesn't fade at all. 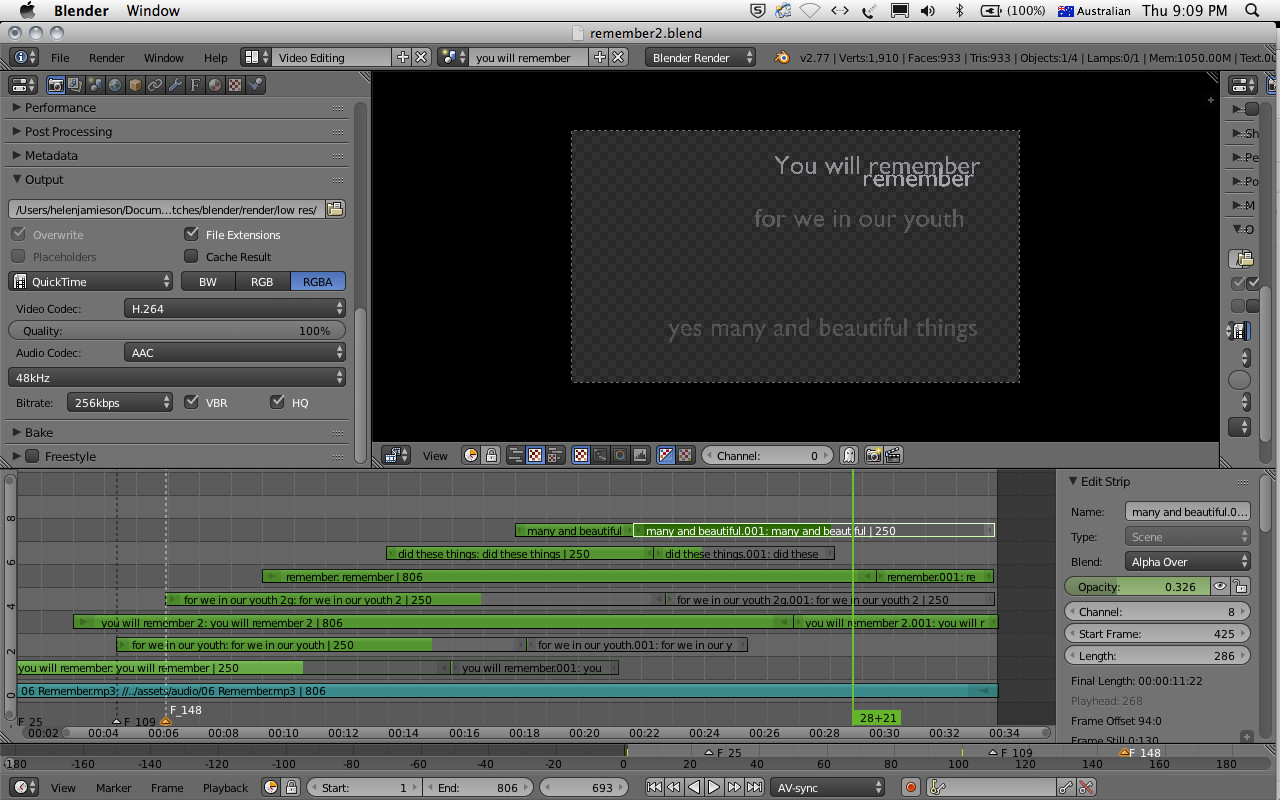 I've tried rendering it out in different formats, including Quicktime, MPEG & H.264, but the Quicktime format is the only one I've actually been able to view afterwards.

I'm using Bender 2.77 and I've created the text animations in the 3D View as scenes, which I've then added to the VSE. I've also inserted keyframes to adjust the opacity at the end of each animation.

The reason your fades are not working is two-fold.

Firstly, the Quicktime format does not support an alpha channel (I don't know of a video format that does... maybe GIF?).

Secondly, your RGBA colors are not pre-multiplied, but are "straight alpha." A bit of explanation here.

Consequently, when your frame gets put into the video format, the alpha portion of that image is simply discarded, leaving you with grey text that's no longer transparent. This didn't happen when you rendered it to images because PNG does support an alpha channel. Thus, you had text that was still fully grey, but it was also transparent. I'll bet that if you rendered to JPGs, you'd lose the fading as well because JPG doesn't support alpha. The question would be whether Blender would pre-multiply your alpha or just discard the alpha channel. I suspect it'd do the same thing that it did with the video and just discard it.

There are two solutions. One is to render pre-multiplied alpha. It's not going to be easy to figure out how to do this because it changed recently in the VSE. And there are a couple of different places in the rendering pipeline that pre-multiplication might happen. If anyone else knows, feel free to edit my answer. But this is a poor solution because the background of your video is incidental, not deliberately chosen. It's only fading to black because all the pixels that aren't rendered HAPPEN to be black when the alpha is discarded. This is a reasonable assumption to make, but it's an assumption not a decision.

The most correct solution is to make the decision of what to fade TO. You really ought not think in terms of "fade out." Rather, you should always think "fade to..." Even in your video, you're not wanting to "fade out." You're wanting to "fade to black." There are a number of ways to accomplish this, depending on what's what's best for your project. The option I'd recommend is to add an Effect Strip -> Color to the bottom layer, and set the color to black. Thus, when your text becomes transparent, there's still something behind it to render.

You could, of course, set the color of the Effect Strip to whatever color you want, and it'd work just as well.

I hope that helps!

Not the answer you're looking for? Browse other questions tagged rendering animation video-sequence-editor or ask your own question.

7
Video Editing Workflow: Use a separate scene for VSE?
1
transitions between video strips in VSE not working... am I doing something wrong?
0
Fading Text In and Out - Video Sequence Editor
0
Intro template not rendering background
1
Export animation as a video for editing later