I am trying to write the depth map of a scene in a 16-bit PNG, without any sort of normalization. I would like to pixels of such depth image to be set to the distance with respect to the camera, and of course the far clip plane value if no object present.

I tried with the following node setup, but I get values up in the PNG pixels which do not make any sense, in the range of [3100,65000] while my object is located rougly at 1 meter from the camera. Near and far clipping plans are 1cm and 10m respectively. I guess they are suffering some sort of normalization, but I cannot figure it out. 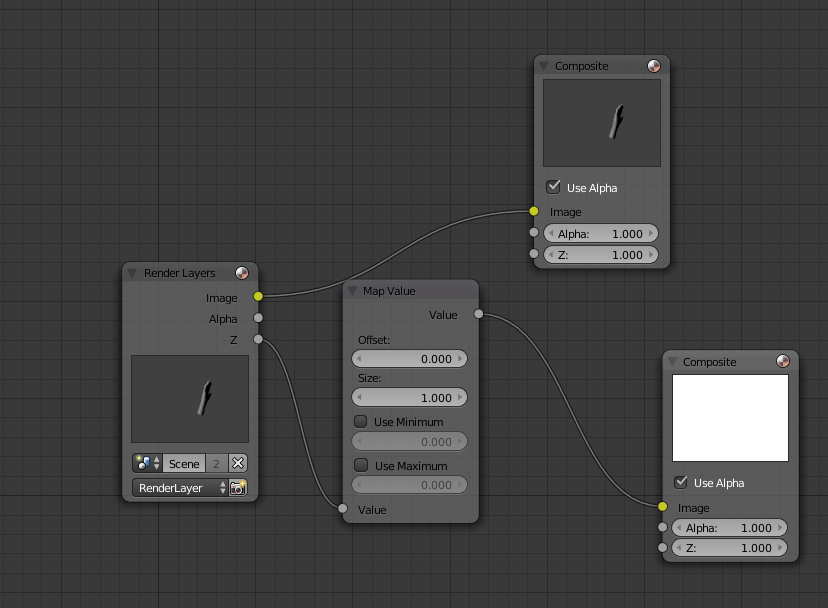 If you are looking for accuracy, Do not save the Z pass as PNG or any other display referred format. OpenEXR is the only format that will allow you to use the linear information from the Z pass.

The only way to get a Z depth pass without distortion is by avoiding any kind of processing except [proper] inversion or normalization. Just plug the Z information to a file output node, and save as OpenEXR.

First let's separate the apples from the oranges:

The Z pass should not be thought of as an image, since its values do not fall into the parameters set for most image formats. 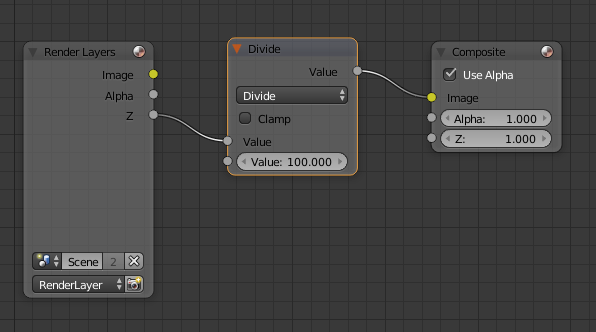 In this example I have the "end" clipping value to 100.

You shouldn't use the normalize node because you won't know the farthest distance from the camera. Let's say you have a plane in the background at 80 from the camera, with normalizing it will output a value of 1 (since it is the biggest distance in the scene) instead of 0.8 the divide node will output.

Not the answer you're looking for? Browse other questions tagged nodes depth-of-field or ask your own question.

4
Saving Z data linearly (accurate depth map)
0
How to obtain accurate depth maps using nodes and visualize them?
1
How to invert the colors properly in Blender?
3
Is it possible to obtain float RAW pixel values using the Viewer node?
2
What is the function of this normalize?
0
Rendering depth map that is linear, aliased, normalized
0
Height Map Using Vertex World Height (Z) as RGB Value
1
How do I do a Z Depth Pass?

1
Animating the camera's focus during a render with motion blur
6
Is it possible to create a render layer with no depth of field?
2
Speed up Cycles Render: Only calculate whats visible to the camera
4
how do I work with LAB color space in the compositor?
1
is there a node that outputs the distance value from the camera dof in cycles?
3
Convert depth/z value to RGBA
11
Distance from the surface as an input node for use with volumetric materials
1
How to render depth or surface Normal maps that properly reflect details of 3D shapes while respecting the nature of materials (transparency/glass)?