I just installed LuxBlend, LuxRender for Blender, in order to test it, and I'm very new to using it. I made a simple scene with a couple of mesh lights "plane objects", and assigned emitting materials to them. I'm trying to get two Light Groups, one for each mesh light, but it looks like something is missing. The Light Groups panel in Render Layers tab is empty. I tried to add it in the light material with no luck, for light materials, I chose Null, for material type, and checked LuxRender Light Emission check box, "as I've seen in a tutorial." There's a tutorial on the Luxrender website that explains how to do it, but I'm sure it's for a different version, because there's a Material Type called "Light", which makes sense. Why choose "Null" for a light? But in the version I have, there's no such material type! I'm using Blender 2.77a, LuxBlend 27. 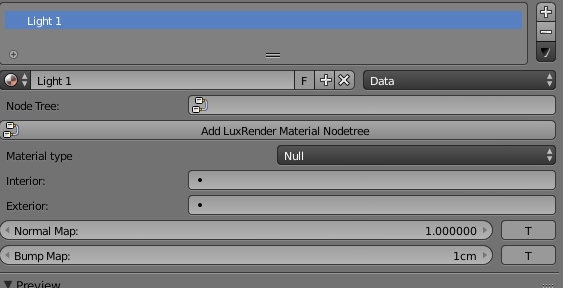 After fiddling with this issue, I found out this is a bug. I uninstalled Luxrender, removed the add-on from Blender, restarted my machine and installed a different version. Using Luxrender 1.6 test version No OpenCL, I have the Light Groups available in Render Layers panel. The Materials Panel preview is still black. I couldn't find a Group Node (maybe just because I'm unfamiliar with Lux), but if I don't use Nodes, I can create Light Groups in Render Layers panel and assign light materials to the Light Groups.

You need to click "Add LuxRender Material Node Tree" in your material. Blender is currently trying to cram the data from the original Blender material into a LuxRender material, and that doesn't work very well.

Once you click that, it should start making more sense. You can find more information here. 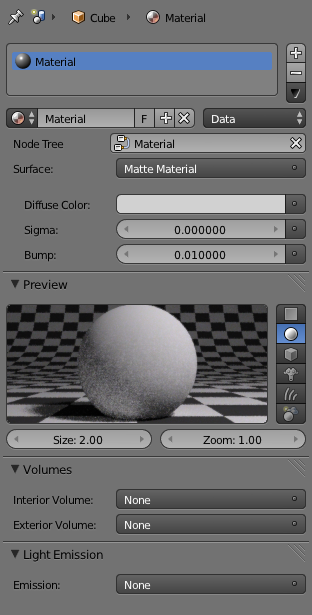 Not the answer you're looking for? Browse other questions tagged rendering mesh add-on light luxrender-render-engine or ask your own question.

4
Materials, textures and how they relate to models before/after render
2
My spotlights are making weird shape reflections on glass
1
Noisy pixelated lightbulb filament emitter
1
Animating running lights
4
Cycles Realistic Lighting & Emission material
0
No light or transparency through glass and water objects using various transparent materials
0
Why is a text not rendering with glow effect but other objects are?
1
How to make light ray with Luxcore