Undo one line in the Python console

I'm learning Blender Python and trying a few one-liners in the console in the scripting layout. You can imagine that it would be really handy to be able to undo one line of command in the console, because obviously I'm going to often end up executing commands I don't mean to. BUT, when I press Cmd + Z (I'm on Mac), it undoes all the commands I've inputed into the console since I opened Blender. That's weird to me. How do I undo only the last command I input in the console?

In the Blender screen capture above a function is written at the top of some file and invoked at the bottom of the same file. Alt-A invokes the script. There is a button as well on the menu bar .. not shown. The above example is just some random sample and only meant to show a function definition and call of the same function. 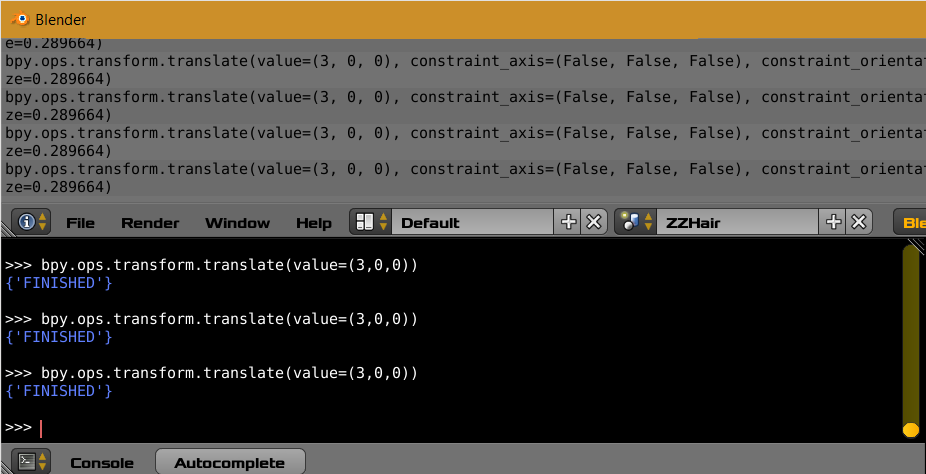 When the Python Console was used for simple operations, Undo worked in the (different) 3D View window. Image above. Console do action. 3D View Undo action. As a quick preview for further study please note the following. I looked at the text in the [Info] window as a means to write the text in the [Console] window. The info windows presented the Python of my manual user actions. I may have never used the the translate function before. It is no longer critical that I remember.

2
Python - syntax error in established code
9
Reset blender environment on each script run
1
'context' error when trying to bevel an object with Python
1
How to distribute overlapping objects?
1
Python commands listed in the info area do not exist
1
Python: Operator Undo Method
1
why grid lines + scale doesn't update, when controlled via python console?
0
Blender Python Console Commands not completing before next one is interpreted?