Should I update Blender?

I have blender version 2.76b. I have noticed that blender doesn't update it self automatically. Is there a reason for that. And also if i update my blender, will I be able to work on blender projects from previous version of blender without any errors or problems? Thanks

You have to download the updated version from the website because there is not an in-software update function. And yes you will be able to edit old .blend files because it is a standard file extension in the whole blender suite.

Blender as no builtin automatic update system at the moment, you always have to download and manually install new versions.

They are for the most part backwards compatible except for major versions like the jump between 2.49 to the 2.5 series, or between 2.79 and the 2.8 series. Apart from some small additions or changes you should always be able to open your files without problems on newer versions unless stated in the release notes.

If there is no particular functionality from the dropped features list you specifically need, and if your hardware is compatible with newer versions, it is always advised to upgrade, unless you are in the middle of some critical project, commercial production work, or a complex scene, in which case you are advised to finish your work before messing with the software installation.

New versions can bring bugs and introduced regressions or some time have issues with newer driver and hardware.

If you want something close to an auto update system you can try the Steam version of Blender.

As far as I can tell, people are enjoying 2.77 more than 2.76b. You'll be able work on your previous projects without any problems. An automatic update option would require Blender contacting the server prior to starting, which would increase the time Blender takes when starting up (some computers already struggle with start-up time, as Blender is a dense program with lots of functionality written with a simple language), especially if it struggles in contacting the server. And if it does find there's an update, artists may feel pressured to postpone their work while it updates, or while they try and figure out the new features. Not to mention the annoying reminders, prompting the need for a "Not right now, never bother me again." check box.

Ulus, in your case, I would not expect that you should not have a problem accessing files created in 2.76 from 2.77,after updating. I have sometimes experienced problems when attempting to open a ~.blend file created in a much older version, in a much newer one, for example, trying to open a file created in 2.4x, perhaps downloaded from a site like Blendswap. I have found that two things reduce problems when making such an attempt. One is to open the file in an intermediate version, save it, and then open it in a current version. So, if I download a file created in 2.49 or 2.5, I might open it first in 2.62 or 2.63, save it, and then open it in a more recent version. The other thing I discovered that reduces problems loading older files is to clear the the "Load UI" button in the file browser, outlined in the light blue box in the image below. 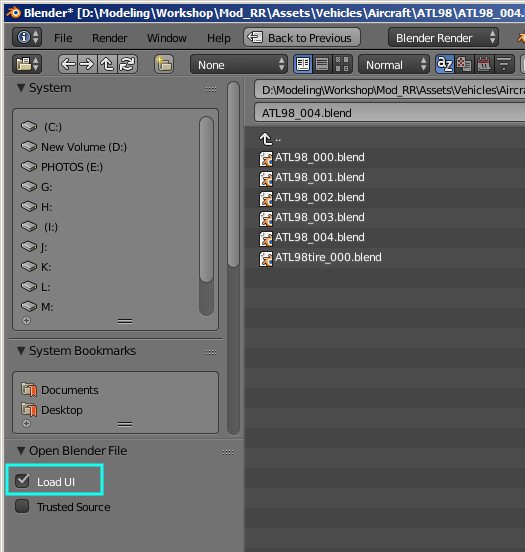 If the button is not cleared, then the user interface stored in the file will load, and if it's an old enough file, the UI will be dramatically different than the one to which you are likely accustomed.

there should't be any issues with your projects after updating.

If you download Blender via Steam, it updates automatacly!

Blender does not have an auto-update function, so you have to install new updates manually

There is practically no reason to keep using old versions except for familiarity. However, I would highly suggest using 2.8 and adapting to the new interface. It really isn't that hard and unless you want to use 2.79 forever, you will eventually have to use the new version.

There are many interesting new features in 2.8, including:

You can see all of the changes here.

In addition, there are some other benefits to using 2.8:

If you don't skip too many versions, there should be no issues with using your old files.

Not the answer you're looking for? Browse other questions tagged interface workflow blend-files versions or ask your own question.

15
Is there a way to update Blender without deleting it and downloading the new version?
3
If I get the latest version of blender, will I lose anything in my old project files?

15
Is there a way to update Blender without deleting it and downloading the new version?
10
Working in a group blender project
3
Why is the Steam version of Blender taking so long update?
2
Should I use Blender 2.44 rather than the latest version of Blender?
0
How to keep projects of previous blender versions when installing new versions?
0
Switch between versions of blender
0
Transfering add-ons between blender builds
0
Why does my blender crash when I open a file?