I'm trying to render video of something where the individual pixel color matters. I need whatever format and encoder I use to preserve the basic colors as much as possible. All of the formats in Blender seem to totally destroy the image at a pixel level (except RAW, but that is massive.)

For example, here is a test image. Above is the original .png. Below is that image rendered with the default MPEG output setting. 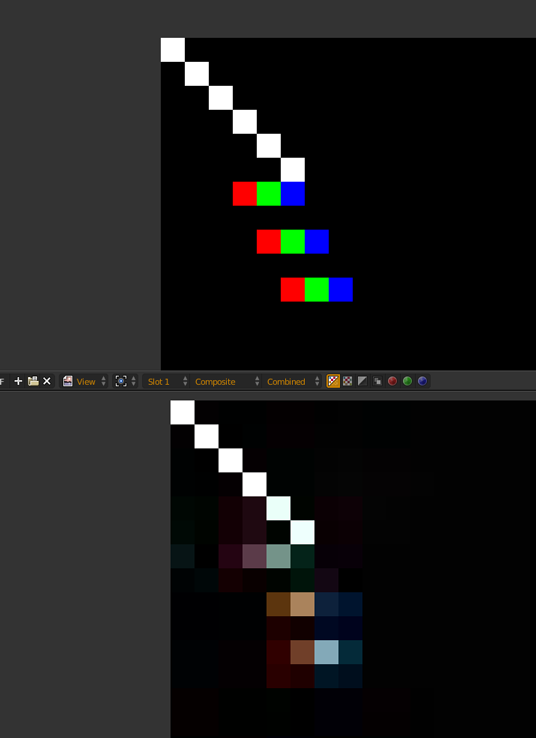 The colors have been drastically altered, and it's added value into solid black pixels. I assume this is some feature of the codec meant to help interpolate between frames in a video or some such. But I'd like to just get regular video, same as an image sequence.

Is there some combination of format/encoding settings where I can just get the same thing as a PNG sequence but as a video without any added effects?

video file-format
Share
Improve this question
asked May 3 '16 at 4:06

The short answer is that you can't.

The longer answer is that it is an extremely complex series of transformations to take something from the RGB domain to the YCbCr domain, as outlined here.

Finally, even if you manage to leverage a 444 output stored in YCbCr that doesn't decimate your work, the output from Cycles is known as scene referred data. This data cannot be captured properly in a PNG nor any codec format. For a larger explanation into some of the nuances of this, see this question and answer.

Not the answer you're looking for? Browse other questions tagged video file-format or ask your own question.

2
How can I see a preview of the sequence of PNGs in the VSE?
1
blender renders wrong portions of video strips
8
Video codec/video file format confusion in Blender
1
Blender VSE - import multiple rendered PNG frames?
1
Movie clip editor playback problem
0
Why do I get different results for my H.264 encoded .mov videos depending on the file format + encoding settings i choose?
3
Lossless 10-bit colorspace (yuvj420p) video output
2
Color distortion when saving as video file