How to make a model cast shadows onto the world texture/background?

In most of my models, I usually end up setting a world background using an HDRI image of some kind or another. This has always been really useful for lighting in general or as a background for my final render.

But what if I want my model to look like it is interacting or touching part of the background? For example, in the image below that I found, the modeled objects look like they're part of the scene, and even appear to cast shadows on the ground. How can I do this? 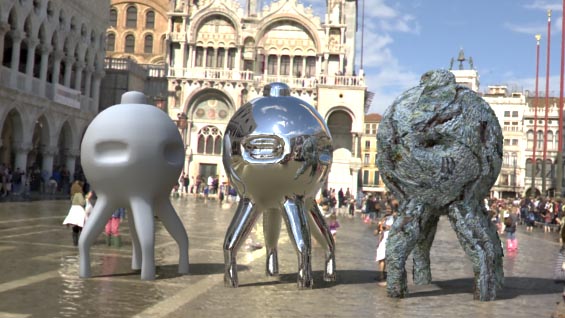 One quick way to achieve this using Blender Internal is to select the plane and add a new material, in the material settings under shadow, enable Shadows Only. 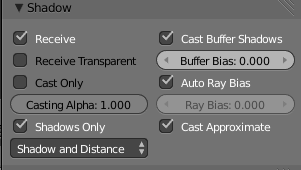 Next, you can optionally enable transparency, use Z Transparency and use the alpha slider to control the strength/darkness of the shadow.

To further enhance this and add to the realism, you can enable Ambient Occlusion and use a blend sky (for simple renders). It is also worth noting that the shadow you get is dependent on the type of lamp and world settings you use in some cases, in the image below I am using a sun lamp with ray shadow enabled and I also have Environment lighting turned on, this softens the shadow and its harder to control but gives a nicer subtle effect. 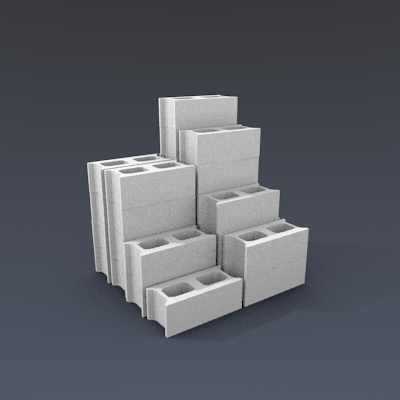 Here I am using a sun lamp and a point lamp with Environment lighting off, with this setup, I can easier adjust the opacity of the shadow with the transparency setting. 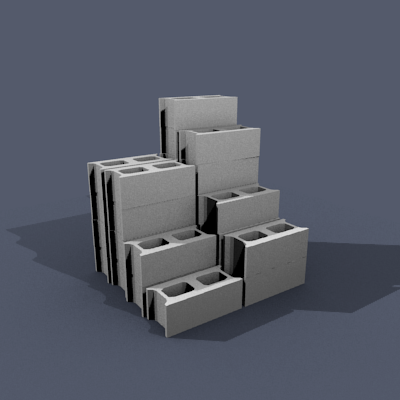 Finally, in a case like you describe above, just render the scene without the sky (untick sky under the scene tab), align the camera as best as you can to the angle of the background, render and use an Alpha Over node to join the render and the background together. Here is a quick example I did in a few minutes.

With HDR lighting and some tweaking, this can look really good. It's a bit tricky depending on how you want to use it and at times it will take a good amount of tweaking to get it to look 'right' but this is a sure way to go about it, the ground plane still catches the shadow but it is invisible.

Starting from version 2.79 any mesh object can be set as Shadow Catcher.
Select object (like a Plane) and check this option.

Shadow Catcher can receive only shadows (limits are nicely summarised in this DevTalk) So I will keep Shader method, that can be used to "catch" also emission, indirect light or reflection that gives more sense in term of merging CG into image. Comparison ...

Material for ground (plane) is Diffuse shader with assigned Environmetal (Equirectangular) HDRi texture. The same texture used for World. The trick here is to use "Reflection" texture coordinates with negative Z value (-1). For smaller color differences between found and environment use RGB node.

As enhancement you can sync HDRi rotation. Just right-click on Z Rotation of World's Mapping node, choose Copy as New Driver and Paste Driver here in object ground material's Z Rotation (value becomes violet). Now when you change orientation in World material it will be copied to ground material too.

Showcase https://vimeo.com/159234378
For more examples and tests check out this Blenderartists thread.

is another topic, so just a quick tips. Use this World node-tree ...

Shadows
If lighting seems to be ok, but shadows are still too sharp/soft the best way is to fix the HDRi image manually in some image editor supporting 32-bit images, select pixels in place of sun and decrease/increase exposure.

To affect shadows directly in blender you can try to add Multiply (Math) node before Divide (Math) node and adjust node-tree in this order:

Rendering – Be sure "Multiple Importance" is enabled in World Properties panel (value like 840), it should be checked by default.

In case you want to merge your CG with the backplate, simply use "Window" texture coordinates for shadow / light receiver. This material doesn't have a geometry limitation. In this example, a plane is used also, but it can be any shape. Scene is lit only by a sun with strength that brings ground image to background colours. Both previously mentioned benefits (shadow/light receiver and in this case general feedback of correct lighting) works here too. Disadvantage of backplate (compared to equirectangular HDRi image) is lighting inaccuracy and missing reflections.

Note: the same node tree is used for the world.

Note: There exists OSL shader QUIP and QUIPCam for this purpose that gives you the ability to have a bit of movement in the environment too. But OSL isn't supported for GPU calculation and takes quite a lot of time to get a clean render.

I'll probably get myself defrocked for this because what I'm offering is more an alternative to shadowing because it's so easy to achieve and is completely independent of Blender's lighting restrictions, quirks etc.

The method is kindergarten level, crude even, but it works!

It's entirely flexible and has the added advantage of being able to assume any shape a storyline demands. It can even move independently of its 'master', take on a life of its own!

The system uses a 2D alpha layered plane textured with the shadow movie or a still frame when no animation is involved. This is laid at the actor's or object's 'feet' and parented to the same empty that's propelling it forward. (for stability)

It can just as easily be placed on a wall, or bent half between!

Shadow movies can be blurred in the VSE when a sharply defined version isn't desirable, the plane textured with that instead.

They are also rendered using OpenGL and with no lighting. (Black on transparent)

A shadow is photographed/filmed as with any movie, capturing the actor's movements, but holding it (the actor) stationary. I find it easier to create a new scene and copy paste the actor into that, animation and all, removing or disabling all lighting. You end up with a black figure doing its thing on an alpha layered background.

This is rendered out using OpenGL as png files, one for each frame and with the "RGBA" button pressed for the alpha layer.

I'd recommend setting up a fixed camera for this. It will give you somewhere stable to come back to, should the need arise.

The cam is usually placed at a position that gives the best results for the job. This isn't necessarily from where the scenario's lighting originates.

More often it can be at its 'compass' direction only, and at a height and angle to suit. In the Plant example, the shadow sequence was taken from about mid plant height and perpendicular to them.

The walking sequence was taken from directly behind and with the forward motion disabled. i.e. animated but stationary. Whatever 'stretching' is needed for the shadow's projection, is achieved by scaling the plane in that axis. Keyframes can rescale as necessary.

The craft taking off was just a still alpha layered 'photograph' to get its basic shape from the sun's angle. (It was not intended for this particular background photo)

The shadow plane was parented to the craft.

When the craft takes off and rotates, so too does the plane, so its Z height has to be held at its original setting. To add realism the width of the plane was scaled down with a keyframe or two to more accurately reflect the sun's projection angle.

Where more complex distortions might be required, shape keys can be called upon.

Not the answer you're looking for? Browse other questions tagged rendering world or ask your own question.

20
Render shadow on transparent background with Blender Render
2
Cycles: compositing alpha channel
0
how do I add a shadow on the floor of a tracking scene?
0
Why does my photo not show up when importing it?
0
Is it possible to render an object's "ground shadows" on a separate layer in Blender Render?
30
Cycles: Shadeless "Shadow-catcher" Material for Rendering onto Footage
15
Render shadows over a transparent background in cycles
13
How do you create an infinite ground plane?
5
Realistic rendering of mesh together with image?
6
How to create an infinite plane in cycles?
See more linked questions

1
Equirectangular skyboxes: Tips for avoiding pixellation?
0
how would you light such a scene?
0
Eevee vs Cycles on tinted glass
1
How would you make this lacquered texture on aluminium material?