How can I fade in and out between cameras during animation?

I have a scene with 3 cameras pointing to specific angles on an evolving object. During the evolution of the object, I need to switch camera so that the object is still framed correctly. The cameras are moving as well. I have used markers but the switching is too brutal. I would like to fade out the current camera and fade in the new one.. I know that if I shoot separate sequences I can do that in post prod but doing it during animation allow me to position the motion of the camera more efficiently.. Is there a way to-do that ? I use the latest release of Blender.

animation camera
Share
Improve this question
edited May 11 '16 at 11:36

What Todd says does work, but it is not the best way of doing things.

Select the first strip, and then the second strip, and then key Shift +A and add a Gamma Cross Effect Strip. Your finished setup should look like this and provide the same result as Todd's. 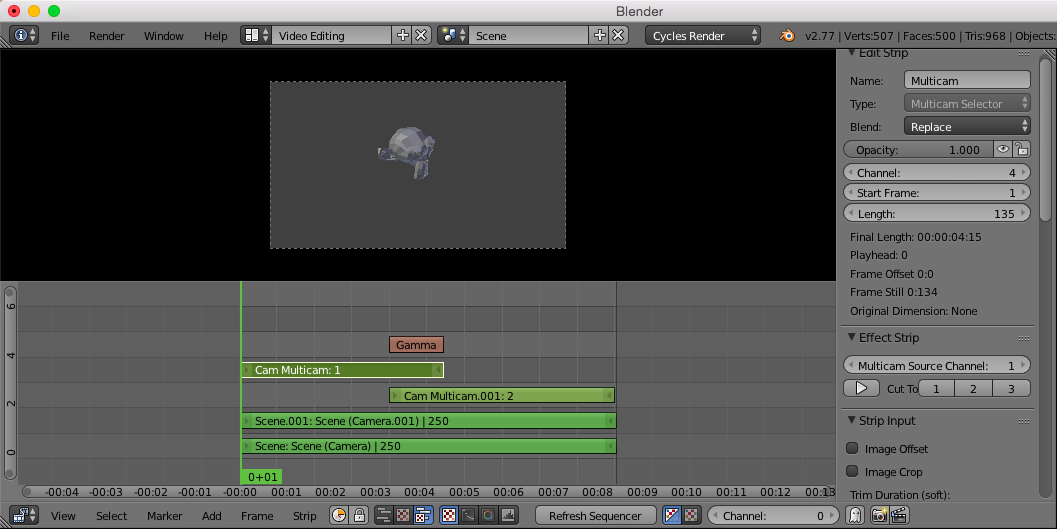 There's no way to directly switch the active camera AND manage a transparency crossfade between the 2 cameras directly from a single scene.

What you can do is duplicate your scene by creating a second linked scene. Make Camera 2 active in the new scene. Then you can switch to the Video Sequence Editor and bring in a Scene strip for each of your 2 scenes. Now it's easy to cross fade the 2 camera views because it's just a like a video edit.