How to move or resize to fit to certain plane?

I've took a model from web (Plottergram from tinkercad.com) and wanted to modify it namely enlarge the table in one dimension. I did't need it to have rounded corners so it's enough to add a cube that fits table's width and height. In this very case I could do this in TinkerCAD itselft, but for some reason I was working offline, so I've got just .stl and Blender.

Now, to fit the width and height I just manually "carefully changed" dimensions of the created cube and then rounded the decimal number assuming the model has some reasonable dimensions. But I wonder if I can do this (resizing/moving) so that a plane of the box fits the corresponding plane of the existent detail in a simple way. Some editors use so-called "work plane" which can be attached to a plane of an object and then resizing/moving may behave in a "sticky" way in regard to it (such thing is in TinkerCAD, too); but it seems that there's no such tool in Blender (at least that is named work plane; this is according to a thread in some non-english forum). So, is there some convenient tool to do this?

PS the following image is added to comment the first answer: 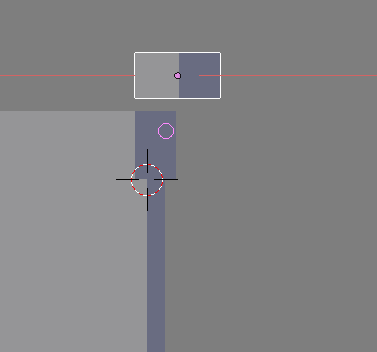 I think you should be able to do it with Snap to Mesh functionality in both Object and Edit mode (shift+tab), no need for any "work planes".

Here is the wiki page with a more precise description of the function: https://wiki.blender.org/index.php/Doc:2.4/Manual/3D_interaction/Transform_Control/Snap_to_Mesh

Not the answer you're looking for? Browse other questions tagged transforms snapping or ask your own question.

2
Compositing: How the resize the scene to fit the matte?
2
How translate an object with a constraint vertex position without deformate the mesh
1
Scale or resize?
0
How to snap plane center to a static vertex?
1
how to move 3dcursor with axis constraint
0
Can't move object along certain axis after declring #frame in transform field
2
move vertex on plane / face
1
How do I transform two objects to the same frame of reference