I have been using Blender for few months on and off. I keep learning and forgetting how to do things. The problem is I don't have a solid understanding of few key things in blender especially about shaders, textures, and materials. I follow youtube tutorials to achieve my desired goal. There are people that will tell you what shader to use, but not why you should or should not use a different shader.

Could someone simply explain what basics I should have in mind when setting the material for objects in general? Or could you please recommend a book or some online material that covers the basics on how to use shaders (in cycles), for instance at an intermediate level?

Here's my approach to creating materials in Cycles. In my opinion, it helps a great deal to have a decent understanding of how Cycles works. Knowing at least a little bit about the gears behind the rendering process can be a huge help in putting together a decent shader.

Cycles in a Nutshell

Cycles is a backwards ray tracing engine. Ray (or path) tracing is the process of simulating light bouncing through a scene. It is a backwards ray tracing engine because instead of emitting rays from each light source and tracing them through the scene to the camera, it shoots the rays from the camera "through" each pixel and traces their paths backwards through the scene to the light sources. Once the ray reaches its final destination its pixel's color is calculated based on the path it took. 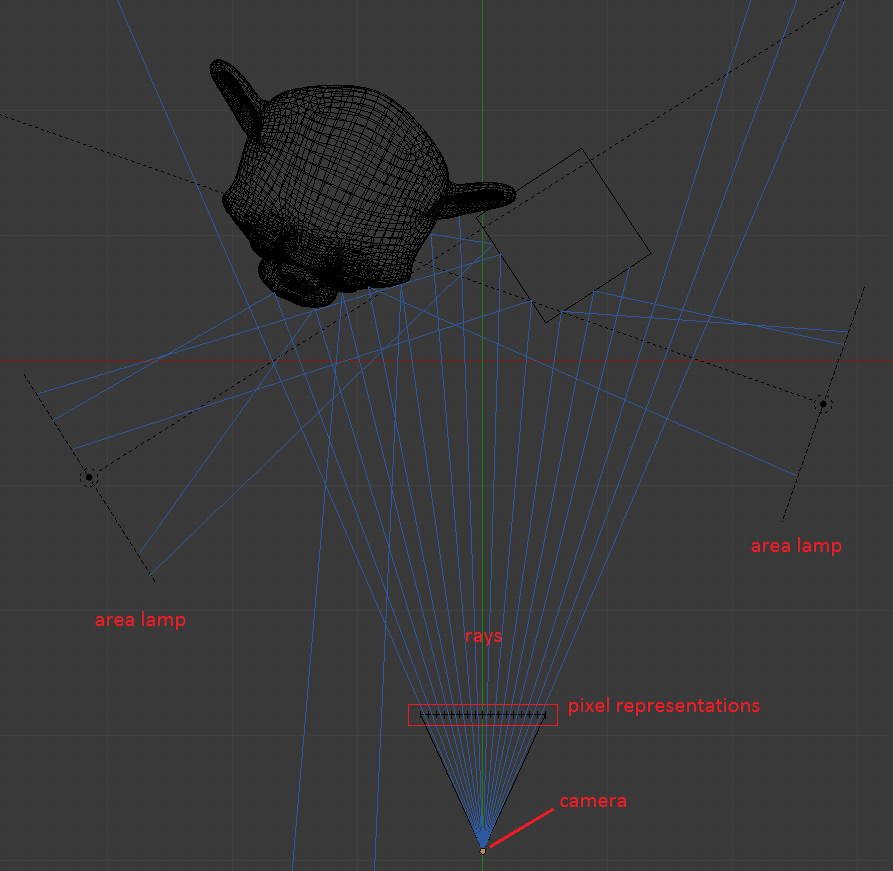 See this answer for a more detailed explanation.

What is a shader?

A shader is what tells Cycles how light interacts with a surface or volume. When a ray hits the surface of an object, the shader assigned to that surface is invoked. The shader tells Cycles two things, how the ray bounces off the surface, and how the surface affects the color of the ray.

When a ray hits a diffuse surface it will bounce off scattering in a random direction. Since light reflects in all directions from a diffuse surface, the surface will look the same no matter what direction you are viewing from. Diffuse is what most people would consider "flat" or "matte".

When a ray hits a pure glossy surface it will bounce off along the angle of incidence (specular angle). Since incoming light from a given direction will always reflect in the same direction, glossy reflections change when viewed from different angles.

Glossy shaders also have another parameter, roughness. Roughness introduces a small amount of randomness into the direction of the ray as it bounces off the surface. The higher the roughness value the farther away from the specular angle the rays will scatter.

Translucency is the transmissive equivalent of diffuse. When a ray hits a translucent surface it will pass through the surface and scatter randomly on the other side.

A variation of transparency is refraction. When light hits a refractive surface it passes through but is bent slightly, according to Snell's Law.

There are a few more shaders than this available in Cycles, but they are essentialy all "fancy" versions of the above properties.

In real life surfaces really don't just exhibit one property, just about any surface is a mix of the properties described above. So to produce realistic materials in Cycles you have to be able to combine various shaders. There are two ways to combine two shaders, mixing and adding.

Mixing two shaders means the surface will partially behave like on shader and partially behave like the other shader. In other words, if you mix a diffuse shader and a glossy shader with a mix factor of 0.3, the surface will be 70% diffuse and 30% glossy (the fac parameter determines the fraction of the second input). Or more precisely, when a ray hits the surface, there is a 70% chance it will behave in a diffuse manner and a 30% chance it will behave in a glossy manner.

Adding two shaders means the surface will be have like both shaders. Meaning if you add a diffuse shader and a glossy shader, when a ray hits the surface it will bounce off in a random direction (diffuse) and along the specular angle, effectively creating 2 rays for every ray that hits the surface. It is worth noting here that without carefully calculating the energy of the shaders being added, adding shaders is likely to produce non physically accurate results.

See this question for more on adding vs. mixing shaders.

What you should really keep in mind about shaders, is that there are several kinds:

The basics are vertex and fragment shader:

The vertex shader is the entry point for the position, normal and texture coordinates of your mesh vertices. The pipeline is complex, but it will pass it to the fragment shader which will be coloring the geometry.

It's mostly the fragment shader that does effects such as reflections/refractions, ssao and real time shadows (so basically all the lighting stuff).

There are standard shaders defined for cycles that you should learn about if you want to work with Cycles.

148
Resources for Blender
28
Difference between Add Shader and Mix Shader?
11
The anatomy of a Cycles render?