From Blender to UE4 : armature bone

I'm exporting my file with a mesh and its relative rig from blender to ue4 using FBX. After the export in ue4 it appears that my skeleton has one more bone, called Armature (it's the highest in hierarchy, above root). When i export my file i use these preferences

I have already check this question Blender ascii fbx adds a Armature bone before root bone UE4 but i can't still remove that additional bone from my skeleton in ue4. Is it a problem of blender? Is there a solution?

hope I'm not too late. I think I finally figured this one out! Or at least an useful workaround.

The problem is that UE4 understands the first Object in the exported FBX file as a bone even if it isn't even a bone. In this case UE4 thinks the "Armature" object is the root bone called "Armature" and that your "root" bone is a second bone attached to that first one.

My solution was to just remove my root bone, and rename the Object "Armature" to "root" in Blender.

For example, if you're making a rig following the official UE4 Mannequin model, it will look something like this: 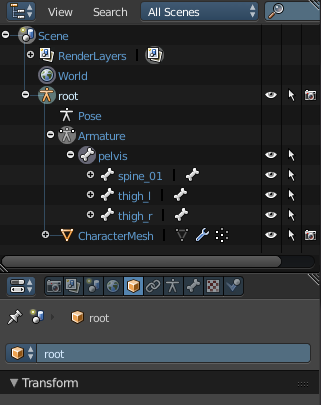 In Blender, you go to Object Mode, click the Armature, click the Object Data tab (selected in the picture) and rename the Armature to "root". On the Outliner you'll see that "root" is the first object, that's the name of the Object data-block and in UE4 that will act as it's your root bone. Then comes another object called "Armature", that's the name of the Armature data-block, you can change this name clicking the Armature tab, but from my testing that makes no difference to UE4. Then comes the actual first bone, the "pelvis", not the "root", which I deleted.

Using this setup with Blender 2.77 and UE 4.11 and I was able to successfully export the Character, import it to UE, and retarget the default animations to it.

As things stand right now, the importer for fbx is effectively patched (a nice word for hacked) to allow as exception for Blender made fbx files if the name of the root node is 'Armature'. 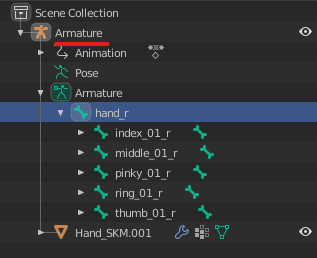 I was using Mr.Mannequin's Tools Plugin for Blender to import the mannequin skeleton to model my character on and indeed I ran into this problem.

The armature was named UE4_Mannequin_Skeleton and exporting it to UE4 indeed showed it as a bone above root, which messed up Root Motion and Advanced Locomotion System.

The part about UE4 now ignoring armature actually worked when I changed the armature name from UE4_Mannequin_Skeleton to armature and inside the skeleton, there was a bone group named the same so I changed that to armature too and it works. Fixed up Root Motion and ALS.