How to make a fake 3d environment / animation with blender

I'm trying to follow a tutorial that covers all the main steps that I must learn to create an animation with blender. I'm becoming aware of the complexity and that it takes a lot of time. So,I thought that making 3D animations is simply prohibitive for one only person like me. I have also read that I can create 3D animations with a fake 3d perspective, that could be obtained by placing the camera in certain ways and by placing objects on particular inclinations of the X and Y axis. I would like to know more. I found only few informations on the net. But I've found an italian article that explain the logic behind the fake 3d. I have translated it to english language to explain better what I would like to do with blender. Here you can find the italian article :

and here you can read the english translation : /tell me what you think and if you know more informations about this matter,thanks/

To familiarize with the 2D representation of a '3D virtual universe' I show you a small application, a little map that has three axes arranged in a way that represents the reference system of Java3d : Y upward , X positive to the right and Z positive coming out from the screen.

The application, called ' witu ' ( Where In The Universe ) is essentially a small java2d panel, resizable and customizable which takes as input the values ​​of X, Y and Z of an object (or of the point of view ) in a Java3D universe and shows a small ball inside a little map. The bead is precisely the object or the point of view, so the application behaves like some kind of panel that says ' you are here ' (it comes from here , in fact , the name witu ).

Because of the limited size of the panel , it can shows the location of an object only if it moves within a space inside a limited area , called ' bounding box ' ; in our case , therefore , we need to define a ' bounding size' ( that will be equivalent to the length of the axis X , then the real 3D position will be translated , with a simple proportion and a pair of trigonometric formulas , in a 3D position). It needs a bit of trigonometry to calculate the ' fake ' Z coordinates (called tmpZx and tmpZy) .

In the ' WITU.java ' source files are present , commented , all the instructions that allow you to simulate a 3D space projecting it , using simple formulas , on a two-dimensional panel. The class witu simply contains the panel , that should be associated with an application that sends data of the 3D coordinates.

Inside the ' WITUapp.java ' files , defined on the same page ( next article in this guide) you can find WITU.java , that precisely defines a small mock object that creates a witu panel and performs some operations : basically , it sends the X values , Y and Z and modifies them in real time . The output of these operations is shown in real time on the Witu panel. 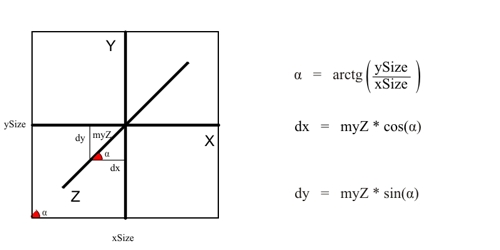 The reason for fake-3d in the article is probably not the same as your reason. Instead I imagine its a way to make things look 3-d while they are not. While Blender is a suite of applications and capable of many things you may be better off with another application, if you dont want real 3d?

Not the answer you're looking for? Browse other questions tagged modeling animation objects 3d-view or ask your own question.

4
Is Blender a sensible environment for making a first-person orrery?
0
Environment lighting(Blender internal)
5
What are the implications of a very large scene (scale-wise, relative to the default cube)?
3
How to make quick 2d animation with blender? Npr
0
In Blender 2.8, how to make an animation with different objects appear at different keyframes
1
how to make an object blend with the background without looking fake?
3
How do I render with frame_change_pre handler active?