I want to simulate the rotation of a few wind turbines I created in blender. I want to see which performs better and hope that the results will represent the reality.

Animating wind turbines you created in Blender will not be a major issue. Creating the meshes, linking them together, and creating the animations to show movement will not be a major issue, either, being straightforward applications of modeling and animation techniques. But the "see which performs better" part is out of scope of this site, in my opinion. The performance of the wind turbines is a matter of physics, and mathematics. How fast the turbine will spin at a given wind speed is a matter of the geometry of the blades, including the angle of attack, area of the blades, and other factors. I'm not aware of anything in Blender, or any Blender add-on that would automatically assess these factors.

Now, as to your first question, about other languages, &c., according to the help center this question is explicitly out of scope for Blender Stack Exchange. It is probably a better fit at the physics.stackexchange.com site. Besides which there are probably other users on that site who are familiar with details of Newtonian mechanics, and fluid dynamics that I have forgotten, if indeed, I ever knew them.

As to your second question, I'd model the turbine, the wind engine, and the mast as separate objects, as the turbine will need to rotate relative to the engine, and the engine and turbine will need to rotate on the mast. Making the turbine, and animating it, are relatively simple, and there are a number of tutorials on various sites that can show you how to do that. I wouldn't use clothing, except perhaps if you are modeling a Dutch windmill like this one 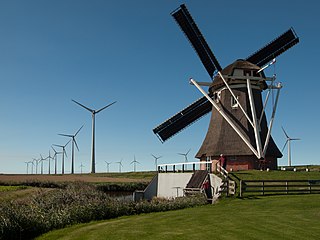 where the vanes of the windmill are covered with cloth. Standard modeling techniques will work just fine in making the model, even with the Dutch windmill, as the cloth there is stretched tightly along the windmills vanes.

Not the answer you're looking for? Browse other questions tagged animation rigid-body-simulation cloth-simulation or ask your own question.

5
Is it possible to animate a soft body object?
0
Rigid Body Physics Rolling Ball Won't Come to a Stop