Say you have 500 stills comprising a video, and you also have the original blend file that created the stills. Is there a way to do a render that skips the time-consuming Image pass but still provides various other passes (like Mist, Shadow, etc.)? And such that those passes are stored in a way that can be input to the compositor to apply the result to the stills? I have done very skimpy passes (low bounces, etc.) that sort of achieve this, and stored them as multilayer EXRs, but haven't found a way to apply the output to more than one frame at a time.

I think the way to do this is as you said: low bounces, no caustics, etc.

You can bring the already rendered image sequences into the compositor with the image node:

You can load your sequence of Multilayer images alongside your original render into the compositor in this fashion. If you rendered the Multilayer images with the render passes enabled you should be able to use the passes from the Image node.

You can also use this alongside the Renderlayer node to composite with the render directly, e.g. with a 150 frame image sequence: 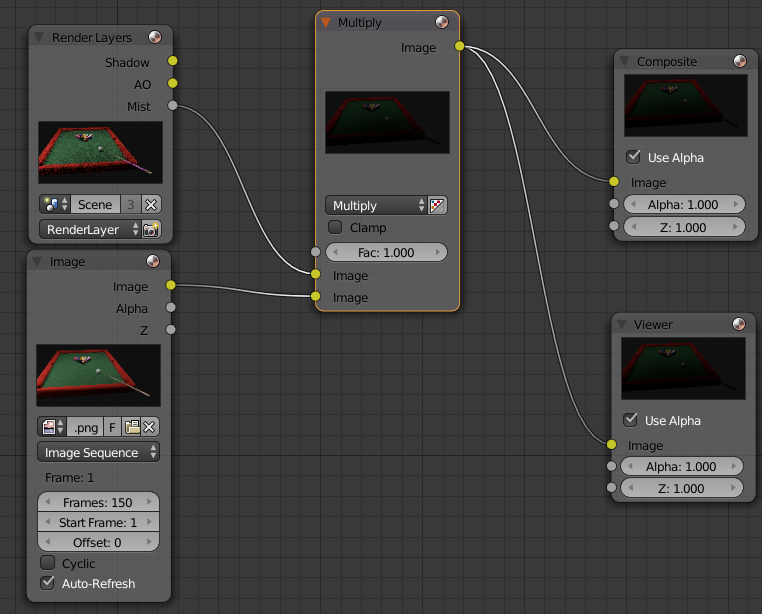 6
Painting on OpenEXR MultiLayer images
7
How to make original full-pass image from separate passes?
2
Z-Pass to After Effects
9
Correctly re-combine ALL render passes?
14
What are the denoising passes useful for in 2.79 experimental feature set?
1
Faking the speed/vector pass
12
How to utilize the denoise passes to build a denoise node network in the compositor
1
How to load a render from cloud-servis into compositor with passes?