I have been using Blender for a while, however up until recently I have only used Blender Render. I started to get interested in Cycles, and somehow it worked fine like Blender Render, up until i noticed a problem when I used a normal map. It took me some time, but i was able to narrow the problem down. Though now i hit a wall and don't know what to do now.

This scene has no light source other than the background set at white and strength at 1. If i add a light source it doesn't change the problem at all. The blue cube is just for an example of a normal Diffuse with nothing whatsoever special about it. No normals in none of the images. The gray objects have an Anisotropic(same problem with glossy material) material on it. Nodes can be seen here: 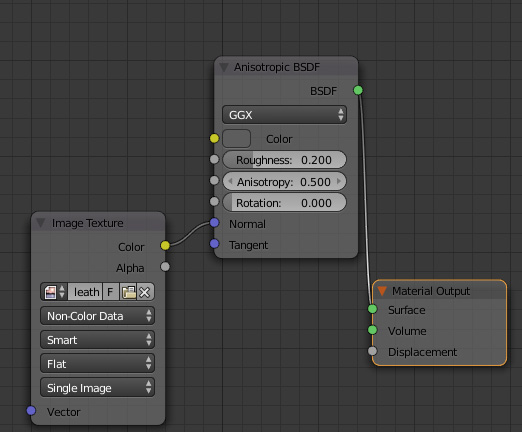 Top left are the gray objects with normals, the jacket with the ball behind it.

The other three do have a Normals setting on it. And here comes the problem.

As you can see, if you view it from behind(top right) it looks fine, the details of the Normals appear as they should, everything is dandy. Bottom left you can see some dark shadows appearing. And bottom right is completely black. And the crazy part is, this happens when there is a lightsource as well(i have tried variations with no "background" light source as well)! I could add a lightsource with the strength of 10000 right in front of it, it would still appear pitch black in the bottom right perspective

I've already tried inverting the faces, checking to see if the vertices are correct(thus the ball in the back), with different normal textures etc. same effects happens all the time.

Try including a normal map node between the image texture and the normal input of the anisotropic BDSF.

Also include a texture coordinate node to tell blender how to wrap the texture onto a mesh.

Not the answer you're looking for? Browse other questions tagged cycles-render-engine materials nodes light normals or ask your own question.

4
When using a baked normal map it is inverted on half my model
1
Shader turns black when connected to node group
0
Cycles: glossy material is too dark
1
Cycles Texture looks odd on the normal side
0
Strange normal map behavior in Cycles (Blender 2.80)
1
is there a way to get the final object space normal (with normal maps applied)