Merge around a face

So, I'm working on a control station that has buttons. It is a one-mesh creation, that means, I don't want to create buttons and things like that separated from the main mesh, but as you can see, I have problems. I would like to make the highlighted parts to be one with the main part around them. I've tried everything, and I have this problem on multiple creations. Any idea?

Update: I've added another example of the problem. I want them to be one face, instead of two. (2nd picture) 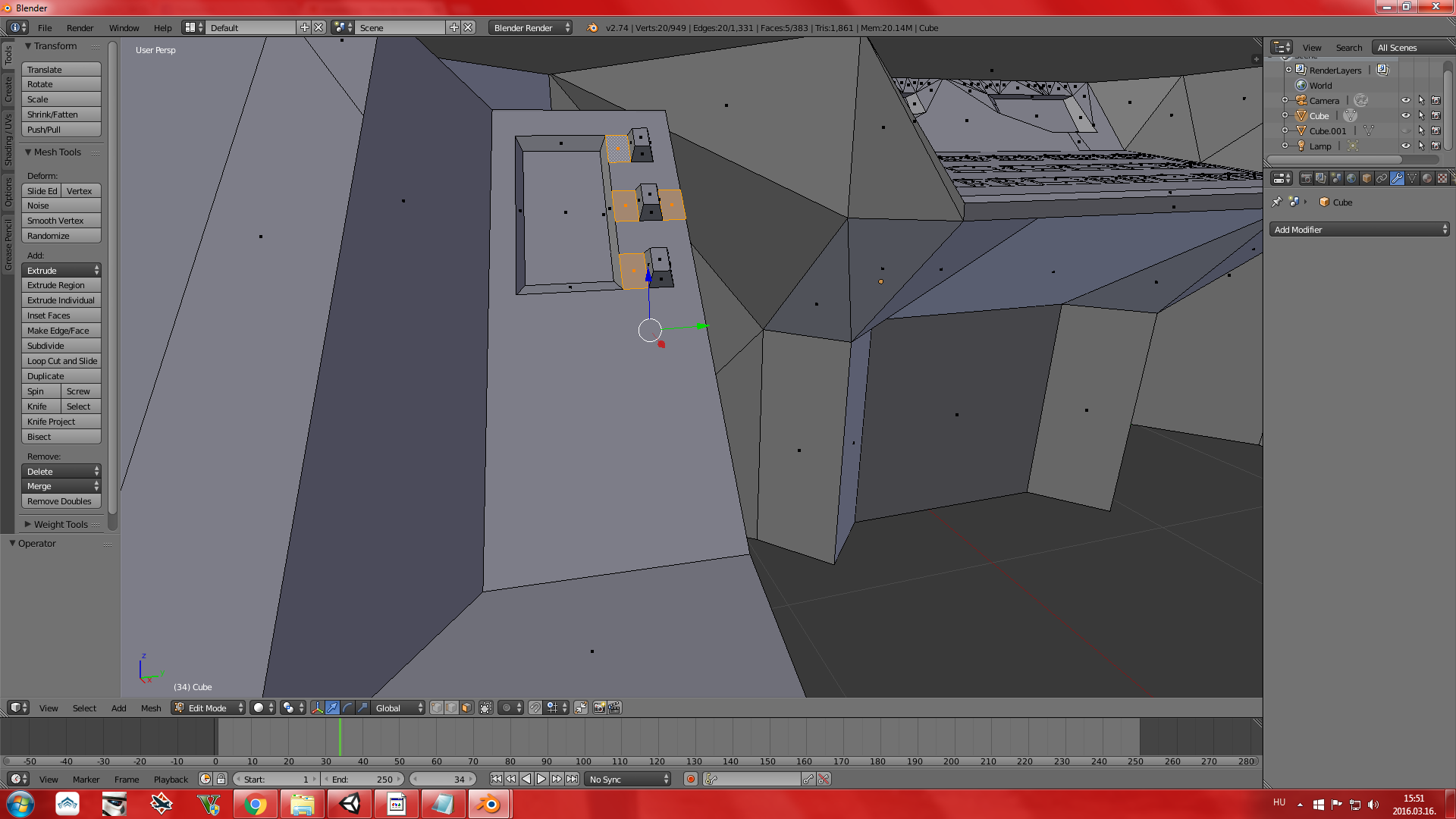 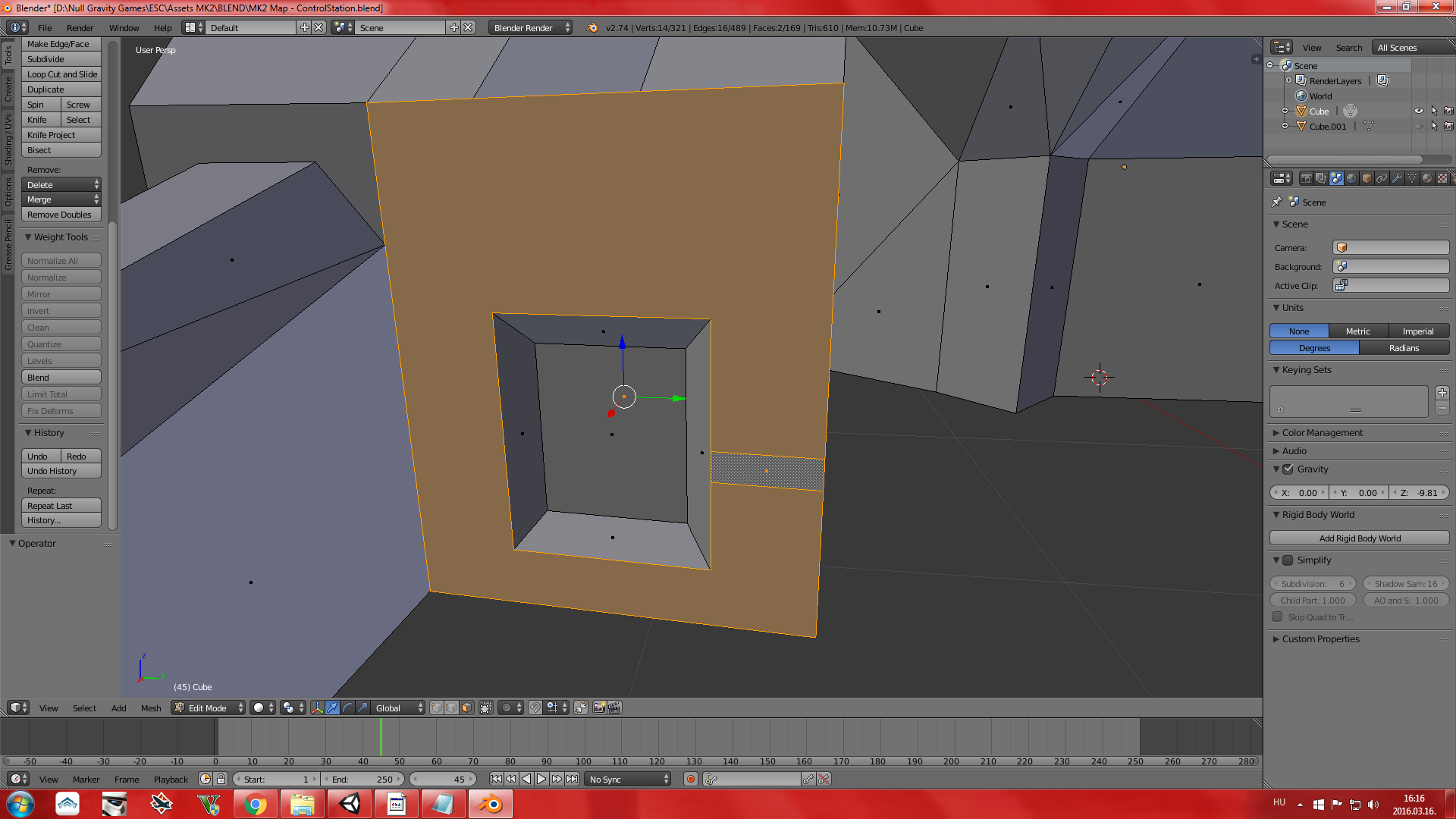 Short answer is you can't do that in Blender.

BMesh geometry engine doesn't support edge islands. Groups of edges belonging to a face must at all times be interconnected. As such "holes" or other geometry arising inside other faces can't be totally disconnected from the surrounding edges defining that face.

There must be at least one edge connecting the those buttons to the surrounding edges, unless they are made loose from the geometry.

A better question however is whether you actually want to do that or not.

Eliminating those edges will gain you nothing, neither in terms of performance nor workflow. The performance gains from one or two faces is negligible in most situations, and in any case having a huge ngon there will most likely result in the same or greater total triangle count as having proper edges there anyway.

Eliminating that one edge may seem visually cleaner and simpler when in fact the complexity is still there, hidden away under the triangulation engine that is tesselating that huge ngon into a face Blender can draw. The resulting face may end up having more triangles in the end, while being far harder to reason with, because of poor topology that doesn't follow the shape of the object.

It may in fact end up being harmful, using NGons is widely regarded as an undesirable modeling practice that is bound to give problems later. You can no longer loop-cut or take advantage of edge flow or loop dependent tools while modeling, and may encounter issues while texturing, rigging, animating, and exporting to other software, possibly yielding unexpected artifacts.

As suggested by Mr Zak you are probably better off using a proper topology with a healthy quads dominant geometry, making good use of consistent edge loops, and uniform density as seen in the linked topology guide.

Not the answer you're looking for? Browse other questions tagged mesh vertices or ask your own question.

3
Edges are not dissolved
3
Can't fix topology
2
How to remove unwanted edge between adjacent coplanar faces?
1
How can I merge these selected faces?
1
Blender adding unnecessary edges to flat surfaces
1
Faces will not Merge/join
0
How to I get rid of these flippin' edges?
0
Blender 2.8 carving a circle out of the face of a cube using the knife tool
1
How do I remove these edges connected to the center?
0
Trouble dissolving edges
See more linked questions

0
Merge these two meshes and export as .obj
2
How do I move multiple vertices to the same point at the same time?
3
How to merge a leg inside a shoe? (physically not connected)
1
How do I remove the line gap things after separating some meshes? (apple peeling)
0
How To Fill The Offset With Material?
1
How to fix this mesh issue?
0
Vertices are hidden by mesh when using Subdivision modifier