Why mirroring and not rotation?

Author uses mirroring on the x axis. I'd like to ask why? I understand that to show us the function of mirroring. But is there any other meaning to use it and not just rotation?

In the particular case of the teddy bear in the tutorial referenced by the original poster, because the leg and bottom of the leg objects are approximately symmetrical around the center axis of the leg, mirroring the object, and rotating the object will have similar results, except that it appears that mirroring may result in the normals of the faces of the object being flipped. With a more complex mesh, however, mirroring and rotating the objects will not have the same result. An example of this would be an exterior rear view mirror on an automobile, such as this one: 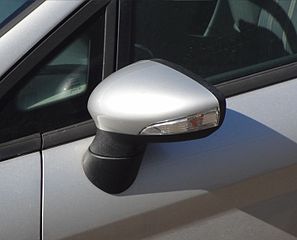 1
Blender mirroring not working
1
Armature X-axis mirror not weighting correctly
3
How to mirror an object along with its local transform orientation?
3
How to mirror or flip duplicates in edit mode?
0
Error when trying to mirror vertex group, to get symmetrical weight paint
0
I'm not sure how to fix this scaling issue
0
Mirroring during retopology creates aberrations on mirrored axis
0
Mirroring vertices not connecting right?
0
Mirror modifyer not mirroring the movement of an object