Possible to use object speed/acceleration as driver variable?

If I have an animated moving object, is it possible to get its speed and/or acceleration vector into a driver variable?

Some ideas I've thought of and haven't worked out:

Ensure that the Auto Execution 'Auto Run Python Scripts' setting is enabled in the File tab of the User Preferences. This allows you to run Python scripts within Drivers. 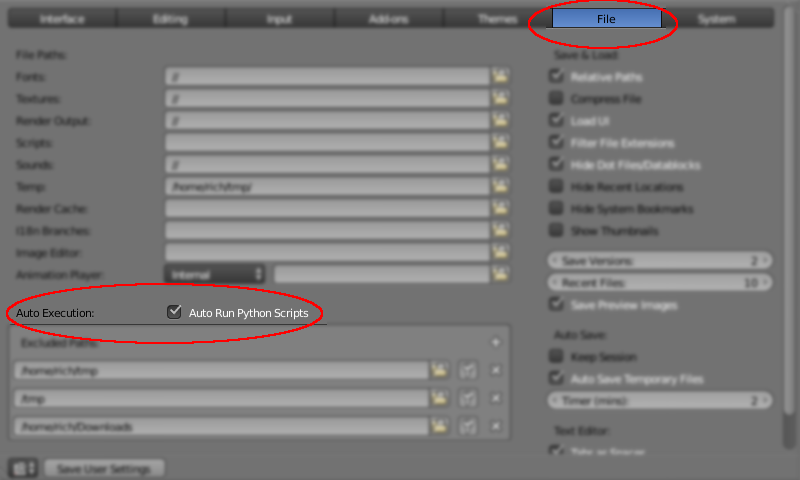 Give it a suitable name and click 'Run Script' to run it now and tick 'Register' so that it is automatically run each time the .blend is opened. 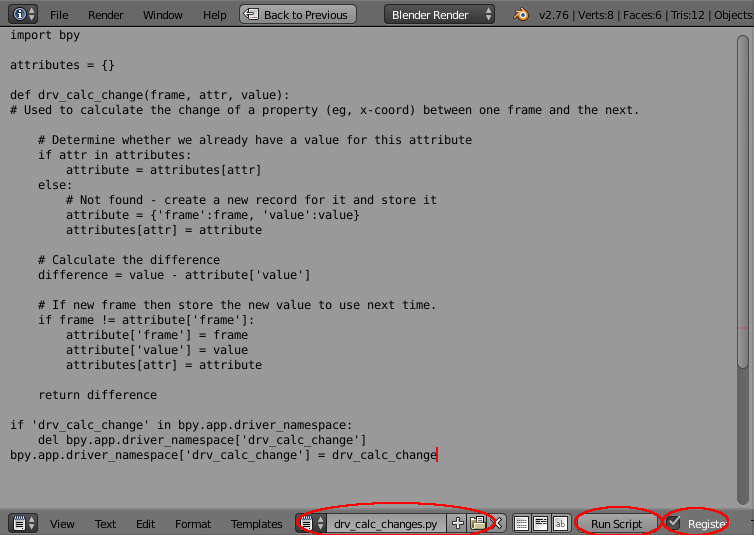 Running the script will register a new function that is available from within Drivers that will calculate the change in any attribute between different animated frames. The script works by storing a list of attributes along with the value for that attribute and the associated frame number, returning the difference between the value passed into the function and that stored from the previous frame. On change of frame the new value is stored to be used for the next frame. Since each is stored along with the attribute name, the same function can be used for any number of properties simply be assigning each a different name. 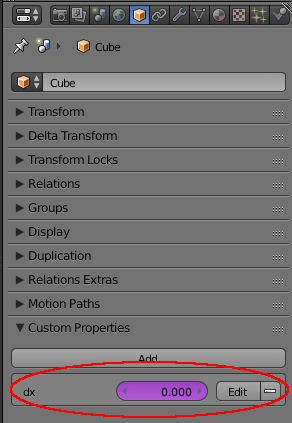 Go to the Graph Editor and change mode to 'Drivers'. Select the new 'dx' driver, open the properties panel (press 'N' while the mouse is in the Graph Editor). Ensure the default 'var' Variable is set to Transform Channel, the Object/Bone property is set to the object you want to track, Type is set to 'X Location' and Space is 'World Space'.

Move up to the Drivers panel and set Type to Scripted Expression and set the expression to 'drv_calc_change(frame, "dx", var)'. This will set the value of the Property to that returned from the new function. 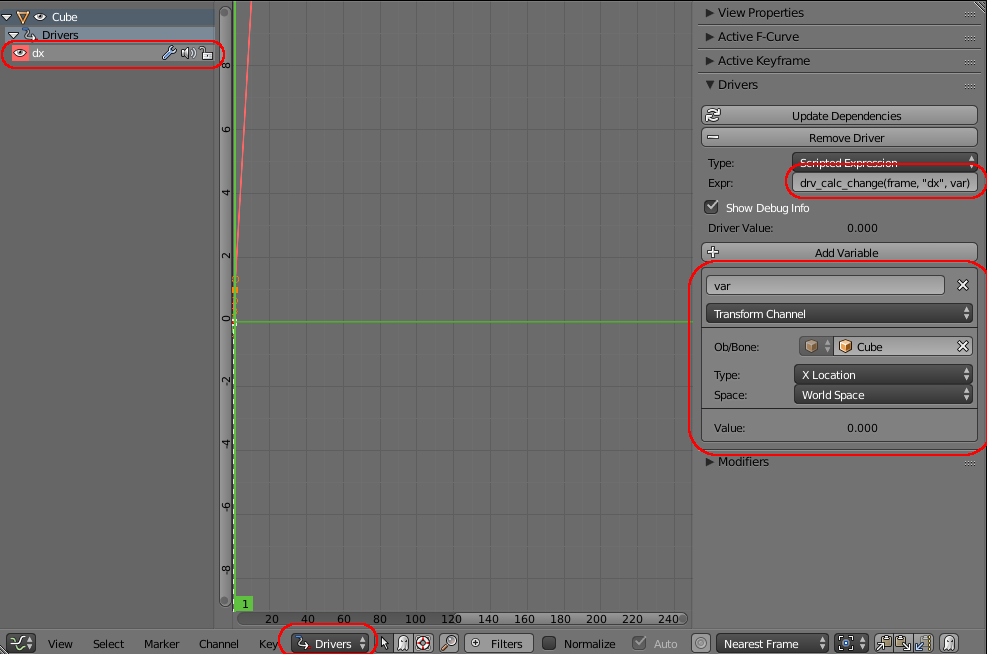 The 'dx', 'dy' and 'dz' Custom Properties should now automatically update with the velocity in each axis when moving between different frames of the animation.

Set some keyframes to move the object around and step through the animation to check that the properties are automatically updated to the velocity at each frame.

In the same way we can now calculate the change in Velocity to arrive at the Acceleration. To do this, repeat the same steps to create three new Custom Properties - named 'ddx', 'ddy', 'ddz' - but this time based on the new 'dx', 'dy', 'dz' properties instead of the object X, Y, Z channels. This can be achieved by using the Variable Type of 'Single Property', setting the 'Object' to the object being tracked and the Path to '["dx"]' for 'ddx', '["dy"]' for 'ddy'', and '["dz"]' for 'ddz'. 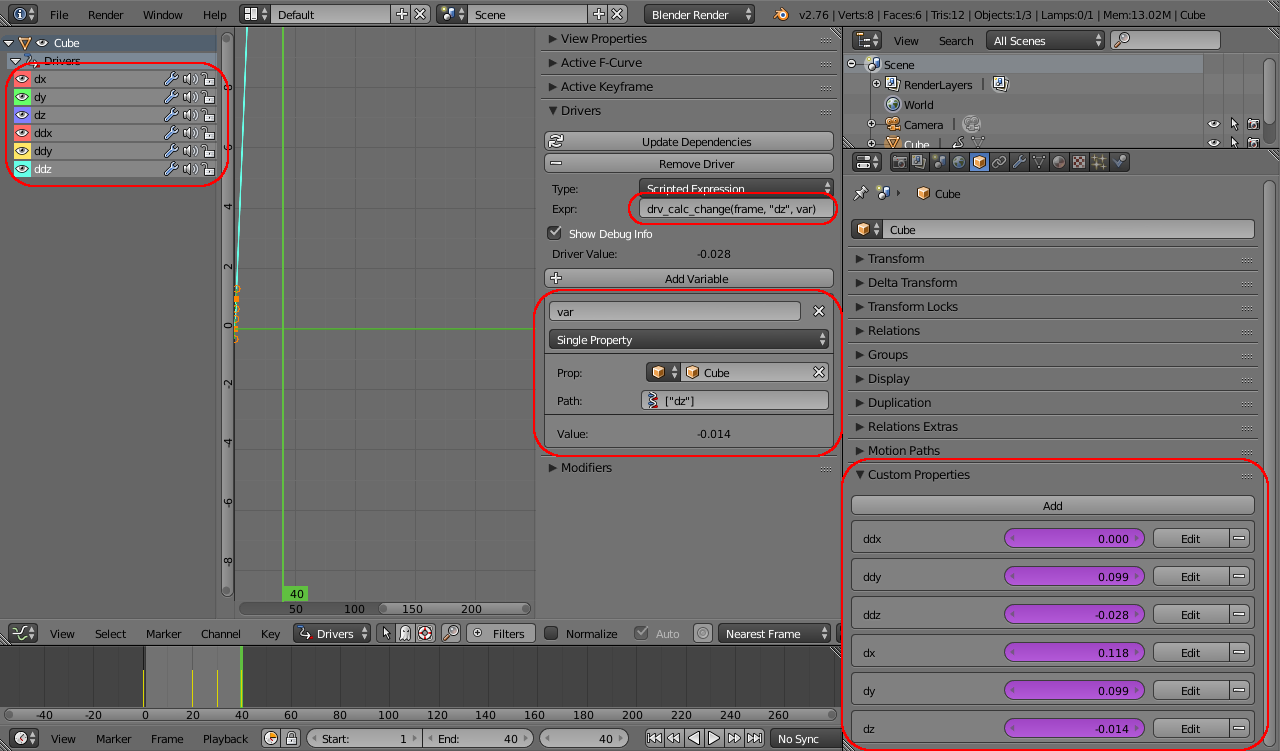 You should now have Custom Properties on the object for velocity (dx, dy, dz) and acceleration (ddx, ddy, ddz) and these should update automatically each time the 'frame' is changed. You can use these properties in drivers by way of the 'Single Property' variable type in the same way as already described above.

The acceleration could be used to automatically position a target for a Damped Track constraint to mimic the tilting of a Helicopter/Quadcopter to achieve the desired tilting to follow a path - rather than having to keyframe the motion by hand - as demonstrated :

NOTE : The function does not allow for jumping to specific frames in the animation or running the animation backwards - only on change of frame. You should Bake the animation to keyframes prior to rendering to ensure that the calculated values are fixed prior to rendering - otherwise strange effects can occur such as sub-frames causing the acceleration to be mis-calculated (as the frame doesn't step by '1') or the 'initial' state being different between rendering runs.

Here is everything in play:

Notice the bottom right hand corner, see the purple field, and the three below it? These are the property objects of the Cube. The purple indicates that there is a driver driving the value. To actually add the driver, you Right click on the value part of the field and select add driver. Then in the graph editor, make sure your graph type is Drivers, then select the property to drive at the top left of the screen. Then enter the function name as the expression and hit Enter. Over on the text editor, check register, and Run Script. Now increment the frame 1 step at a time, and pay attention to those properties on the lower right. 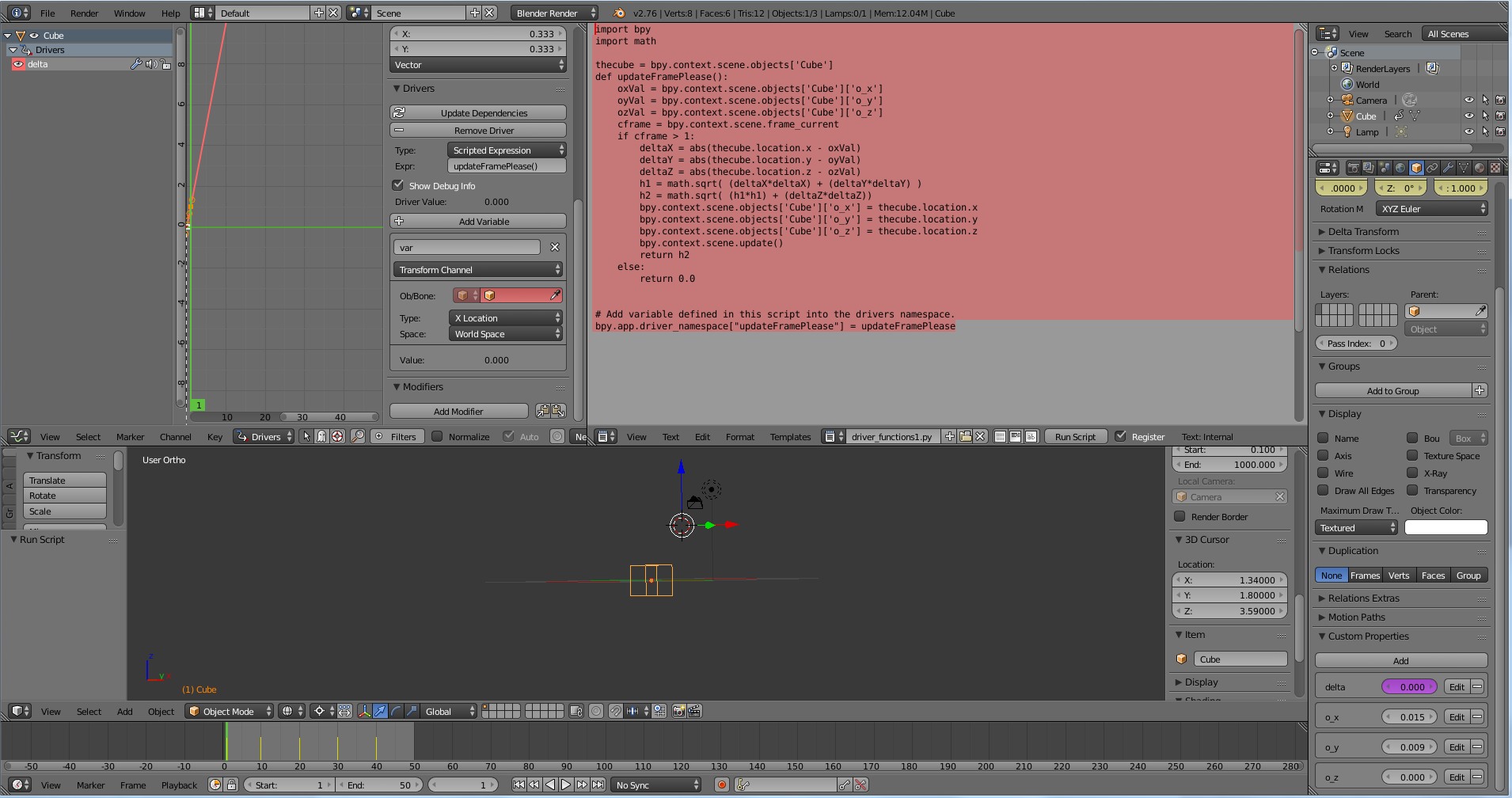 Here's the Blend File for reference:

And here is a link that basically seems to describe exactly what you are asking for in terms of the F-Curves:

The velocity can be approximated quite simply by adding an empty to the scene and creating drivers on its $X$, $Y$, $Z$ location properties to average its own location and that of the 'target' object $V$. ie,

Where $V_x$ is the $x$ component of $V$. In this way on each change of frame it will move towards the location of the object you want to measure the velocity of. The faster the object the more it will lag behind, the slower the closer it will trail and when it stos it will move to the same location. You can then simply take the difference between the target object's location and the location of the empty to determine what is effectively its average velocity.

See https://blender.stackexchange.com/a/61804/29586 for an example of this being used to affect the strength of a wind force to blow particles when an object moves - effectively simulating the air motion around the moving object.

Not sure I'm accurately getting what you asked accomplished here, but see below code.

If you do not mind this generating extra keyframes in your animation you can copy paste into text editor & run script.

Not the answer you're looking for? Browse other questions tagged animation transforms drivers mathematics fcurves or ask your own question.

4
Moving objects create wind
4
adding a delay for a driver
4
Shading according to velocity
3
Animate value node from list of numbers
0
Is it possible to use object motion to drive audio properties in Blender?
1
Delayed driver for targeting purposes
1
Variable in bpy. context