How can I recreate an Icosphere made of separate triangles with AN?

The idea is to recreate the icosphere with triangle objects for further animation.

This here is maybe not the fastest method but it is quite easy to implement: 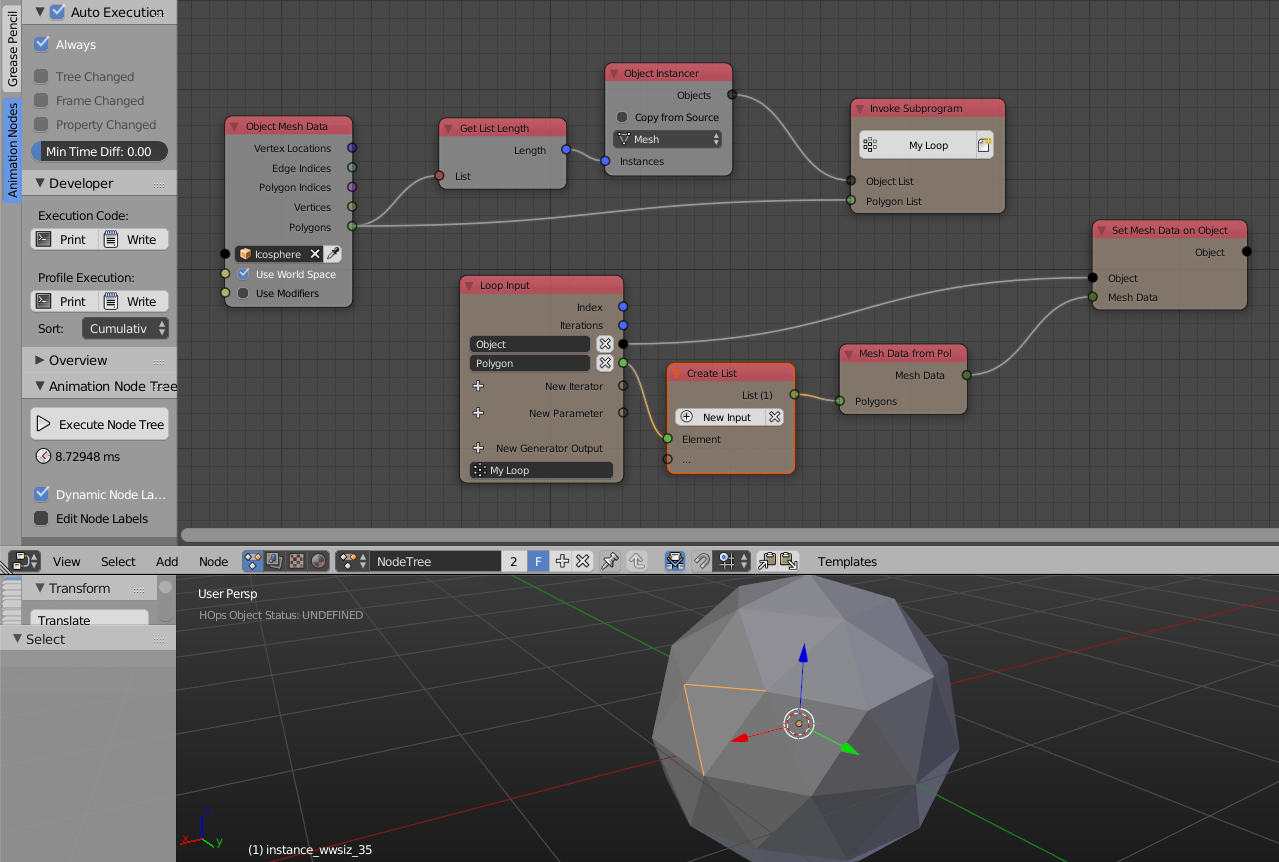 You see it already takes more than 8ms, maybe it would be good to "bake" the triangle objects before you continue to work on your animation. To do that you can eg copy all the objects and remove the node tree afterwards. Alternatively you can also go into the advanced settings of the Object Instancer node and click on "Unlink Instances from Node" and remove the node tree then.

The first answer (Jacques) is right and the most natural/ immediate to Animation Nodes logic.

Still, let's make extra variants and a comparison in speed.

all variations have an extra move poly to origin/ move object instance back (so that we have obj centers in the poly centers), so we add more operations to stress my computer in hope to make it slower so maybe the times will differ more

variant 1, poly to mesh to obj: 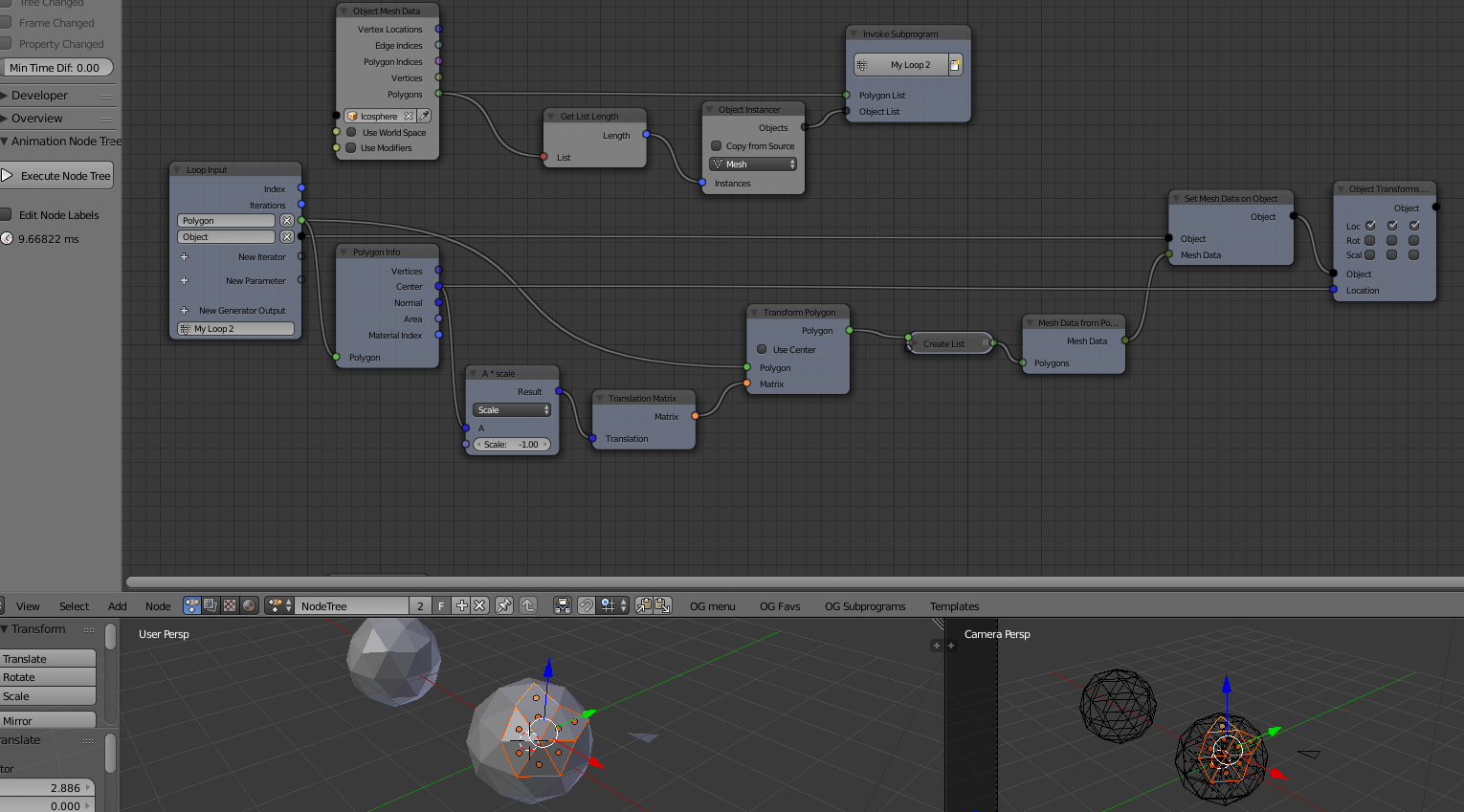 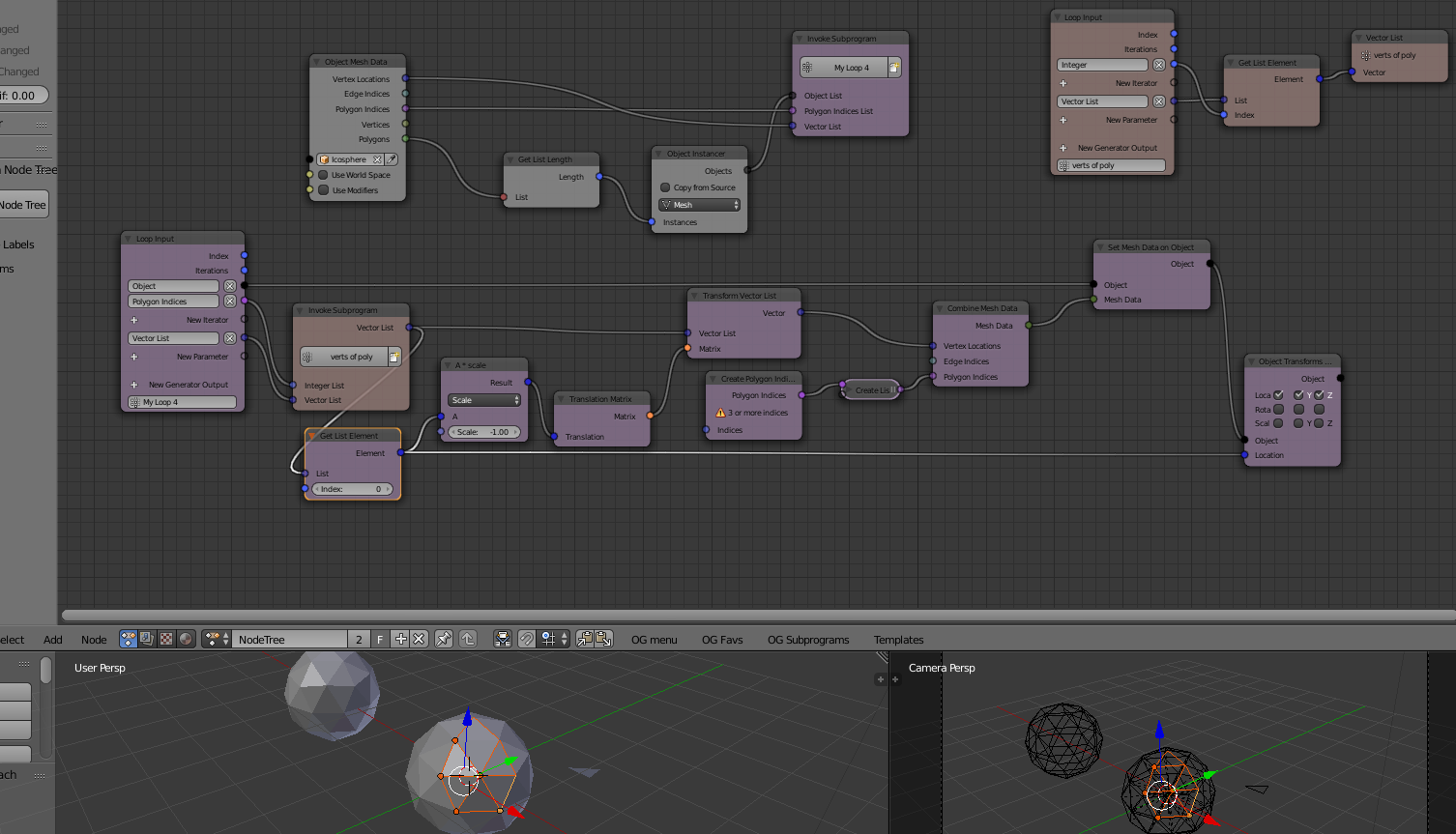 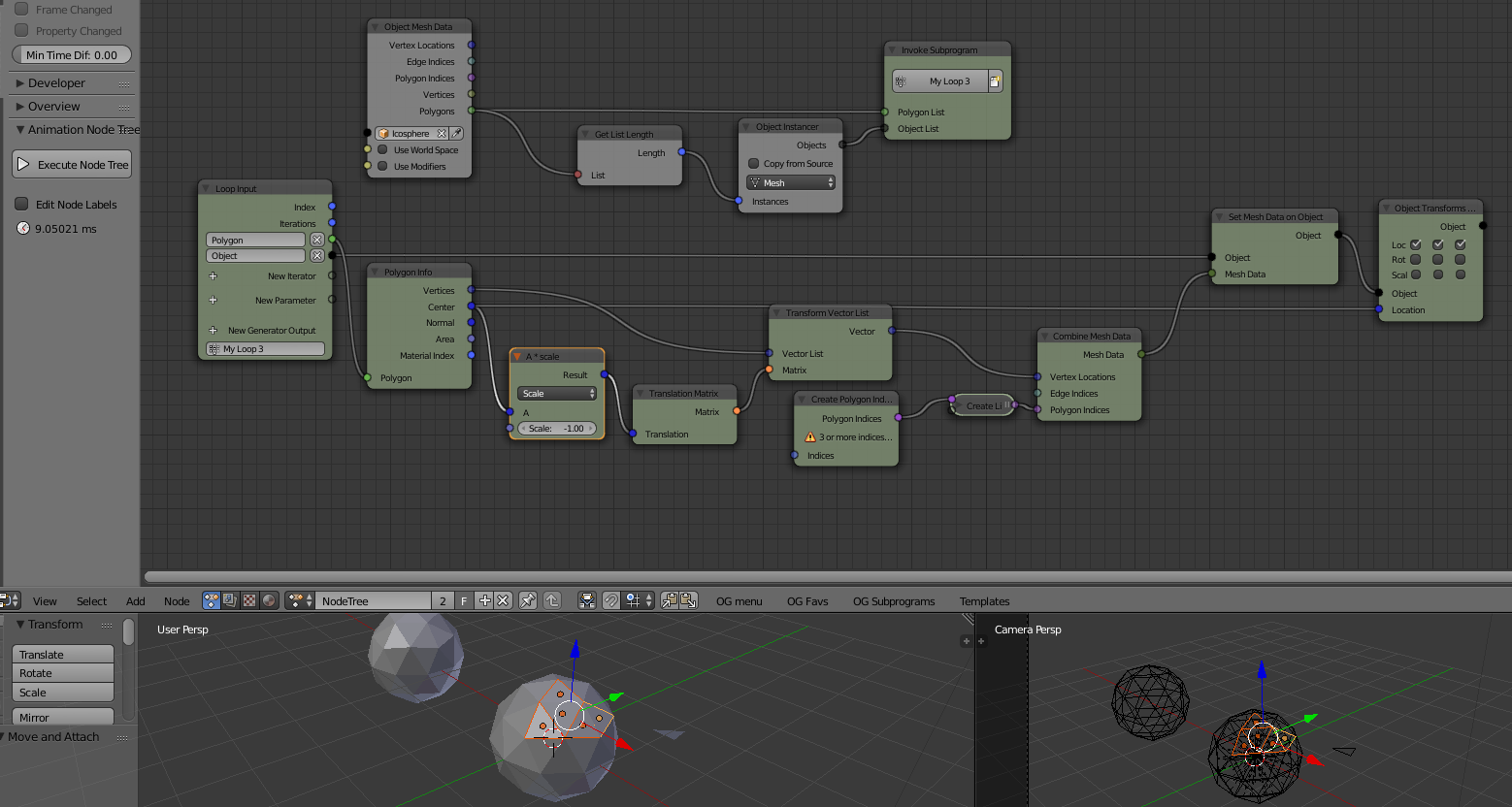 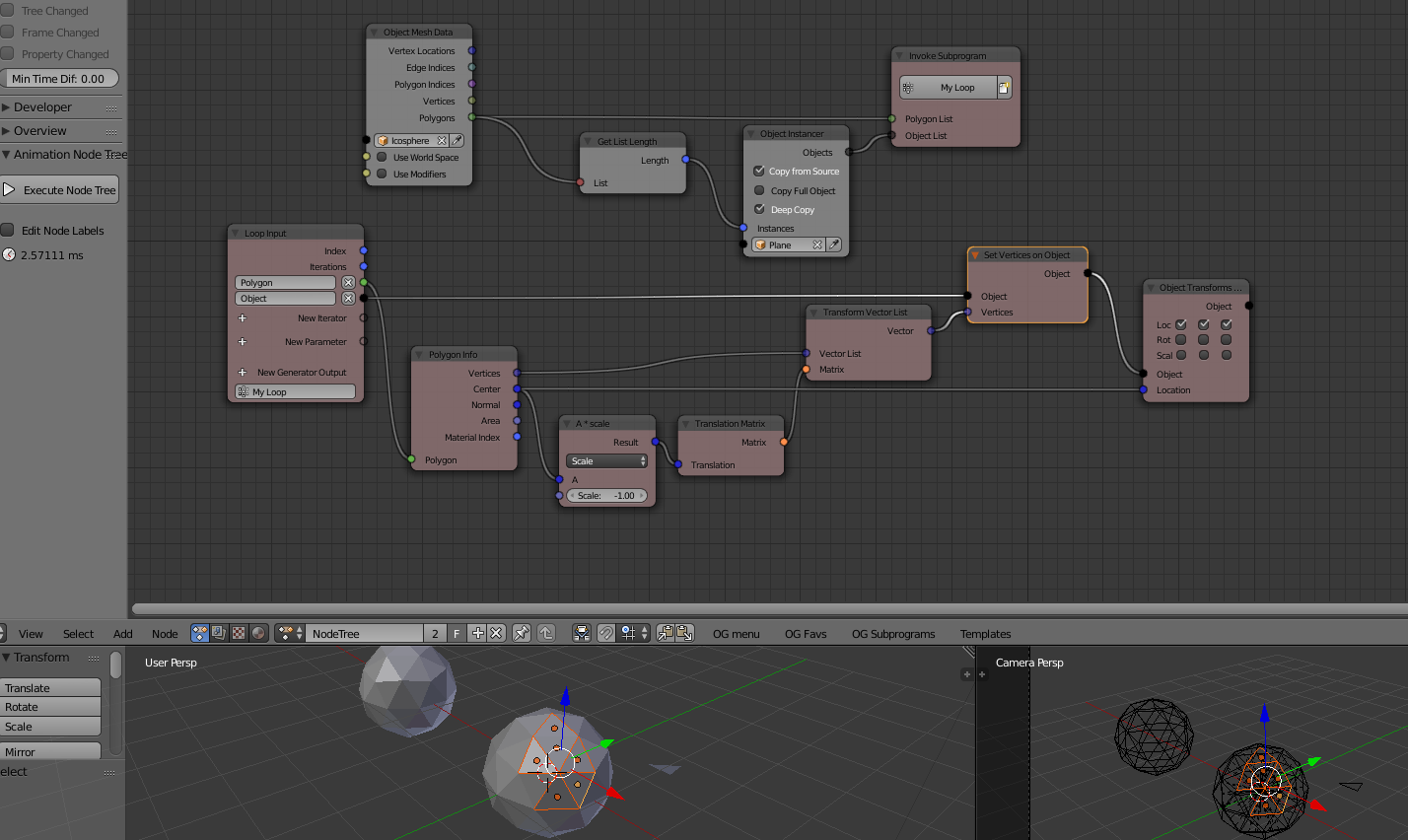 My wild guess is that

ps: moving the verts allows to do extra tricks if the case, like morphing a quad or ngon to the triangles

Not the answer you're looking for?Browse other questions tagged animation-nodes or ask your own question.

6
How can I create a parabolic trajectory between two 3d points
2
How can I use the new BVH nodes to know if a certain object is inside a volume?
4
How to switch different sequences of characters with Animation Nodes?
1
How can I create a random walk animation with animation nodes?
3
How do I loft lines into a mesh with Animation Nodes?
0
How can I connect an object with particle instances on an emitter via some Curve/Geometry connection
4
How do I make a giant clock made of many small clocks?
1
How can I rotate a mesh about another object using animation node in blender