How to break a voxelated object into voxels?

I'm trying to create some objects which are voxelated (pixelated), and break apart into voxels on collision. Like the effect achieved in the movie Pixels(2015). But I don't know how. I got this far:

3. I get the voxelated mesh I want. 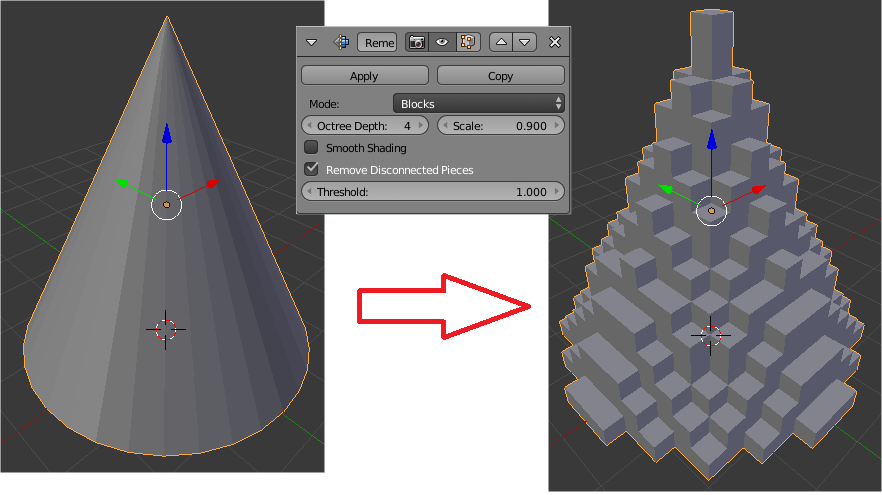 Is there something else I can do ?

I don't know enough scripting. Can you write one ?

The Remesh modifier is made for modeling the surface only. Despite the look could appears quite similar, they are not voxels. It's probably easier to look for another workflow such as...

Particles are set in a 3d grid and particles near/in the elements are kept.

The emission algorithm automatically kill the particles outside the mesh (it must be watertight for correct results). Then you can just duplicate a cube in each particle's location as shown in the picture below. 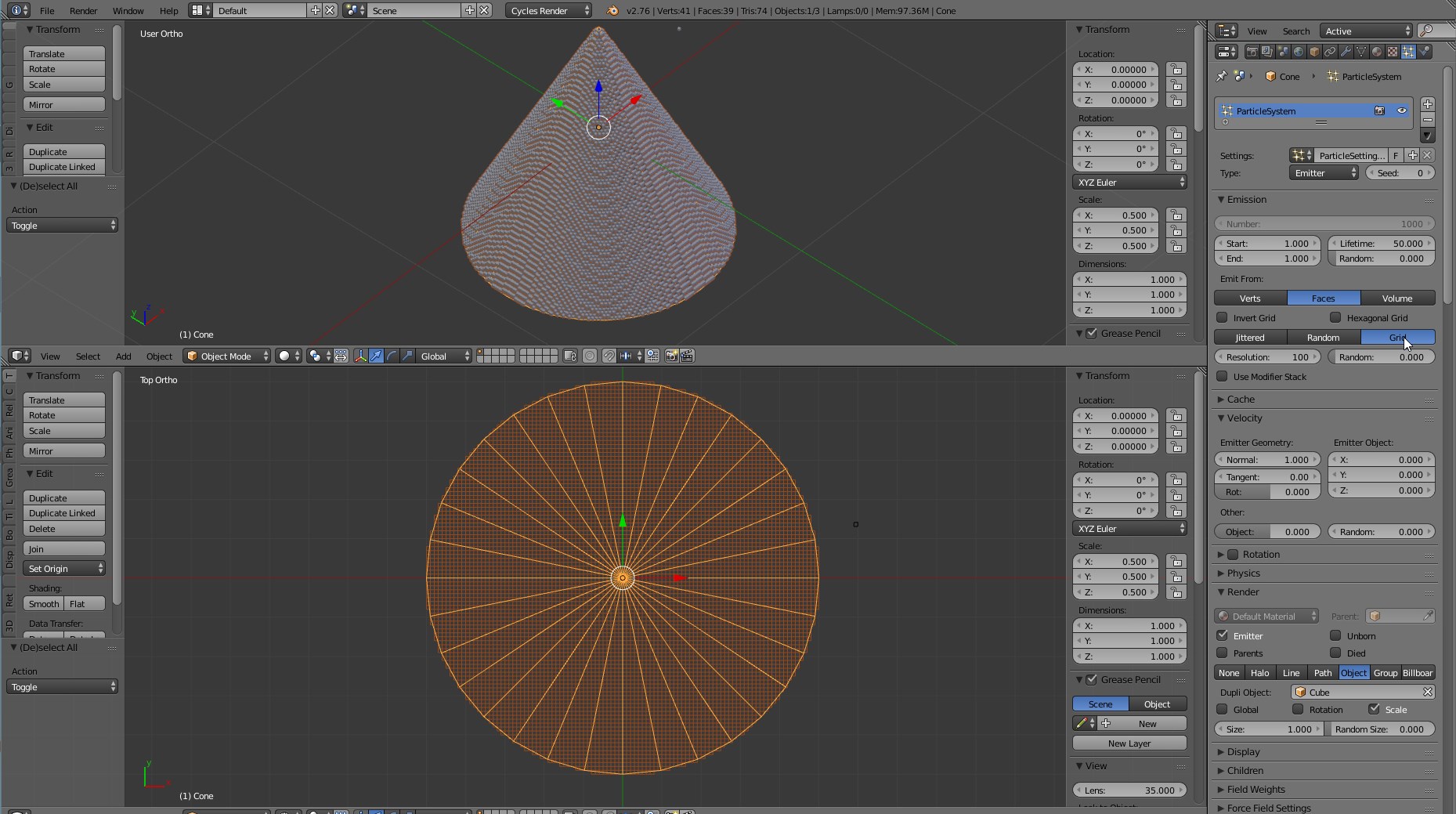 In order to get the cube size that allows no gap between faces you must take into account the reference object bounding box's size and the grid resolution parameter. 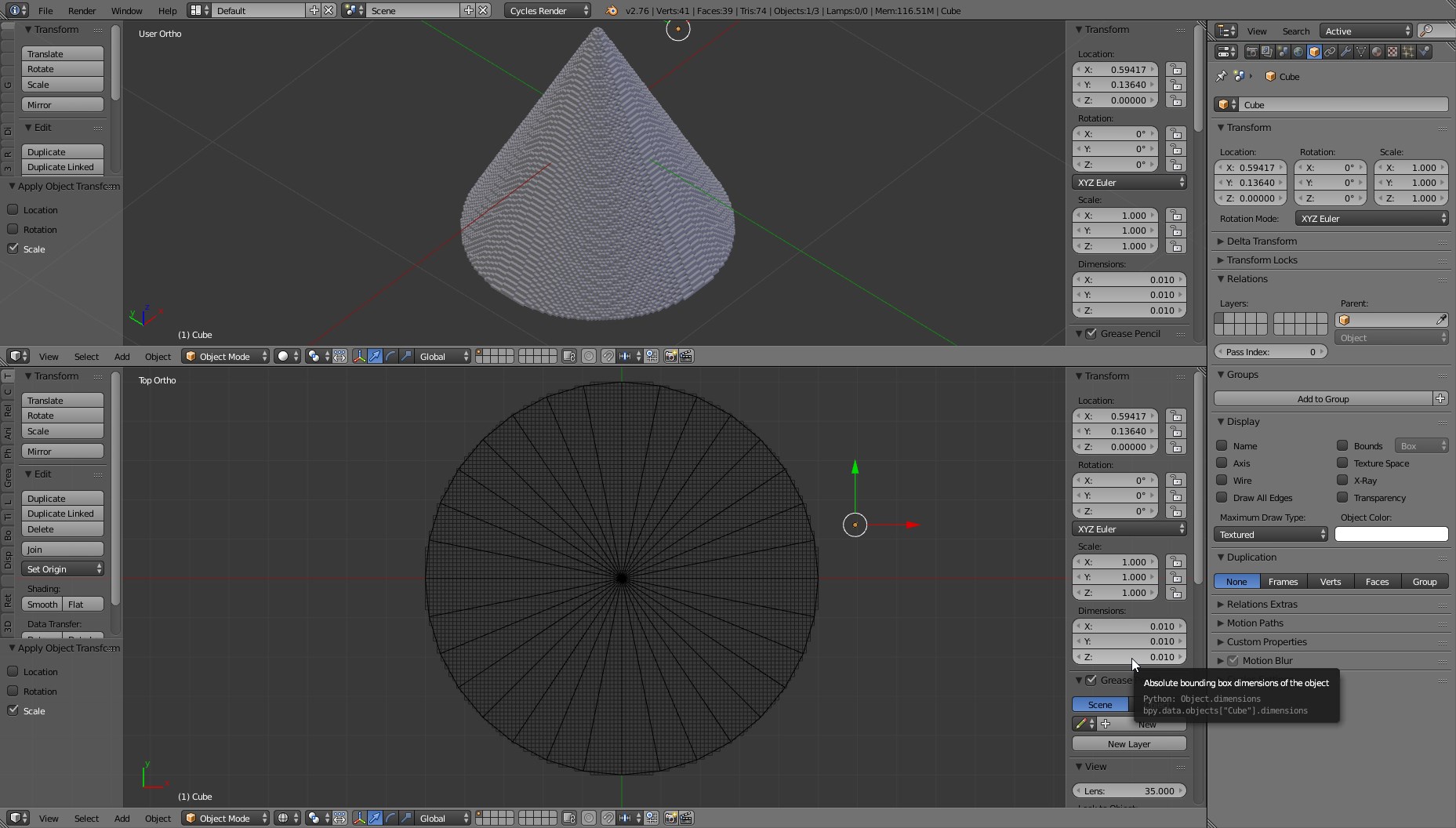 In the provided example, for a cone that stays inside a cube of 1 unit and a resolution of 100 particles, the cube size is 0.01 units.

And here's a Suzanne made of cubes splashing on the floor:

In a nutshell, the generated blocks are particles internally, so they will always behave like points, dimensionless. But we want the boxes to behave like real cubes, don't we? So, we extract (generate) real objects from those duplis, by doing this:

Now that they are independent objects, we enable

physics on one object and copy it to all the rest by doing this:

By the way,
If, for example, you are making them fall on a floor and letting them scatter away, some might pass through the plane, as in the OP's case. So you should increase the (floor) plane's collision margin until no cube passes through.
If it is apparent that cubes are not actually touching the floor due to increased collision margin, then you can change the plane's origin to make them look like they are really hitting the floor.

22
Is there a way to make particles behave like rigid body objects?
6
How to discretize a 3D model represented by as .STL
1
Split blocks in block-based mesh

4
Converting a mesh to voxels
0
Plane is not solid in cell fracture, but explodes
0
When use remesh mesh does not follow bones
1
Algorithm for turning Voxels into Triangle Mesh
0
Blender Remesh Error in Sculpt mode. How do I decrease the polygons correctly and save the project?