What is a Point Density texture?

I see Blender 2.76 now has a feature called "Point Density" textures. Is this a particle system? If so, how is it different from previous particle systems?

Point Density Textures are a way of rendering particles or mesh vertices as volumetric halos in Cycles.

A halo is basically a little volumetric ball. You can accomplish essentially the same effect without point clouds by using dupliverts or a particle system with little spheres as particles. However point density textures are much more efficient due to requiring a much simpler BVH, since the entire volume is within one object, instead of hundreds of thousands of little overlapping objects.

The above example uses a particle system with 250,000 particles and a turbulence force field. To render it as a point cloud I created a "domain" object (a scaled cube) around the particle system and gave it a volumetric emission shader using the Density from the Point Density as the emission strength. See this answer for how to set up a point density texture.

Basically, it is a way of using particles or a mesh's vertices to drive the density of a volumetric material. You will need to use a Point Density texture and set the emitter object/mesh. 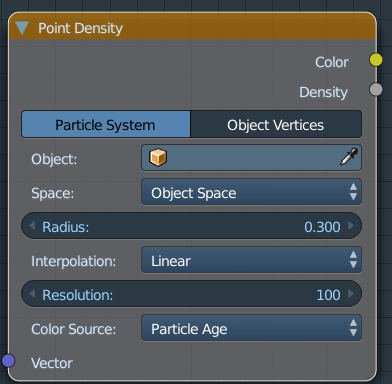 See more on the manual page

Not the answer you're looking for? Browse other questions tagged cycles-render-engine point-clouds or ask your own question.

18
What does static/dynamic BVH do?
14
How to create a fire/light effect in a spaceship engine
10
Halo particles don't render in Cycles
1
Can't find settings for halo rendering

16
Cycles option to turn off texture tiling?
6
Setting Voxel Coordinates
3
How can I prepare a point cloud for visualization in Blender using MeshLab?
1
Rocket engine thrust. Point density node?
2
Render is working locally, but not on the server
0
cannot get wisps on ghost with point cloud node in blender