This is the code I wrote for rotating the .fbx model I imported from Rhino.

The problem is that it will rotate everything in the scene including the camera. I wonder if there is better way to do this? Also is there anyway I can rotate each object seperately?
Thank you!

This sounds like a task that should be performed by the import FBX addon. The addon does include some options for rotation.

The first set of options allow you to define which axis is up and which is forward, if those two don't resolve the placement you may also need to try turning off the last option Use Pre/Post Rotation 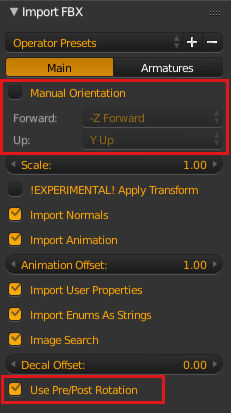 I believe that it would be easier done if you knew the names of the objects that you wished to ignore.

I tried exporting the default scene to FBX, and then re-imported the same FBX after deleting everything.

The FBX file seemed to maintain the object names, so adding an if statement to iterate through the 'bpy.data.objects.items()[index][0]' to check for the known name, seems like an easy enough solution. I'm just not sure if the export for Rhino exports the names. I know you can set a name on any object within Rhino though (via the properties panel).

eg: If I wanted to ignore my default named 'Camera' object

I hope that is helpful. RRiggs

There are two answers.

The simplest answer is to modify your for loop to only operate on the model you imported.

The more correct way is to select the object you want, instead of operating on the whole scene context.

You can also query which object is active

to see if that's the one you want to operate on.

ANOTHER answer is to delete everything first, then import and rotate the way you are already ;-)