"Holdout"-alike Effect Strip for Frames in the VSE?

Is there a way or a workaround to omit certain Frames in the VSE completely while rendering out a final video from the Sequencer? That would be even handy for Playback in the VSE.

When I want the compositor to not render out something (but have an alpha value of 100% appear at certain places resulting in not being visible), I can use a Holdout Shader to achieve this.

Is there something similar for the VSE like an "Holdout" Effect Strip that will basically just skip all the frames including the Audio that are covered by this Effect Strip? I don't mean being rendered transparent, but omitted completely.

It would basically allow me to cut out parts of my Video where I have lots of timed strips that have to stay in place because of the timing with multiple cameras/sound files being all used together. And I have many markers already set up properly at certain time positions after the range I want to be skipped/not rendered that should stay in sync with my footage, so I think just "deleting" all strips from all channels in this range using soft or hard cuts won't be an option here.

Using a Speed effect strip with a very high multiply value doesn't work here as it doesn't really skip frames and doesn't reduce the final amount of frames to be rendered while my remaining strips stay in their position at the timeline.

To make it more obvious with an example: I want to skip the muted and selected strips in my resulting render at around 2:30 to 3:20 with a Holdout Strip I place above them:

But I want to keep my markers at their exact positions and I need these strips all at their relative positions so that my sync between the multiple cameras and audio files won't be lost. They are already aligned perfectly fine in time so far and therefore start at different positions.

I just want these frames where the (fake) Holdout Strip is placed to be omitted while rendering. The benefit would be that I can easily adjust this Effect Strips position even though while there might be some cuts "underneath" already.

Why not just place all of your strips into a meta strip (or VSE sub scene) then trim a hole in that strip. Your editing will stay in place but the animation will skip it upon rendering. To undo the trim simply un-meta the strip.

You can use Strip Duplication & Muting: 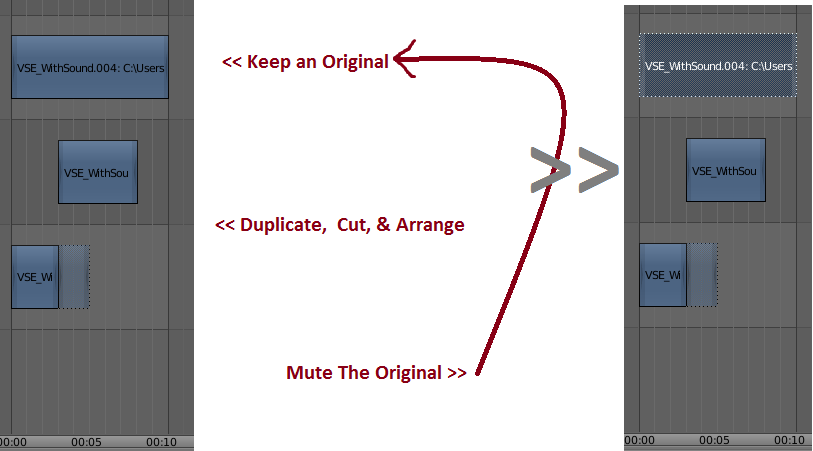 You can move your marker selection as well:

You can select them via this script, albeit semi-automatic (If you keep the default marker naming):

Not the answer you're looking for? Browse other questions tagged rendering video-sequence-editor effects or ask your own question.

9
Why will audio and video not sync in rendered video file?
3
How do I prevent VSE strips using Image Offset from being cropped before the transform effect can shrink them onto the screen?
1
How to use all the audio and video strips in the VSE as a video texture?
1
VSE rerendering whole video for just a simple effect
2
How can I fade out a strip that requires an Alpha Under effect?
0
How to detect with python a strip in VSE being selected?
1
Slow playback and frame regression