cycles transparency results in color loss when background is black?

to make exactly clear what i want:

i want to use a scripted animation that uses live motion capture data for projection mapping.
it shall look like some sort of energy beams or electricity going out or into the body of the actor.
for that i rendered a set of png's that use alpha which i added as an image strip to make an animated texture with animall.

so far so good, everything is working.. with one exception.

wanting to do stuff live, i obviously don't want continuous rendering resulting in a mess of noise, so i thought - let's do it in material viewport shading in cycles

i added a node setup for transparency, which works fine in rendered mode. but to ensure that i can use tranparency in material viewport shading, i switched to internal, adjusted transparency settings and switched back to cycles. my problem: this results in transparent mesh, but the color of my texture is gone. why is this and how can i prevent it? 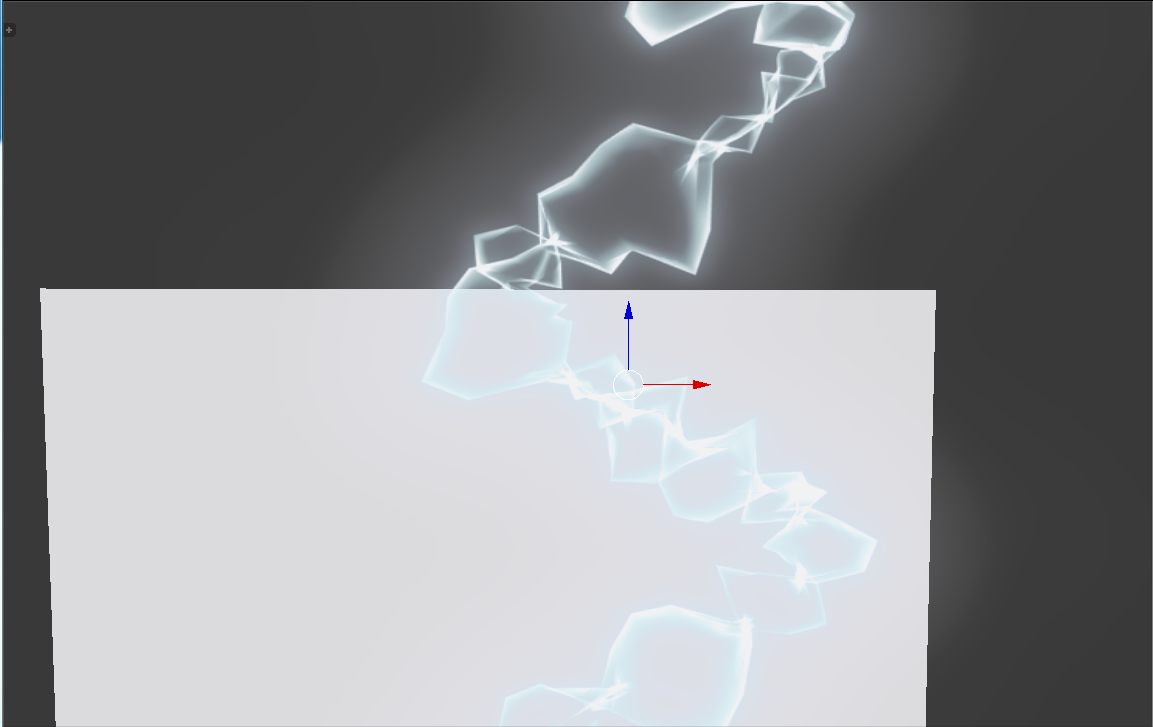 i took a second look at the background plane and i noticed that the loss of color appears when the plane's material color is set to black. when it's white, the texture appears blue, although it's hard to see. my goal is to achieve transparent mesh with a texture fading to alpha in viewport material mode, that keeps the blue color no matter what background plane there is. having to use a white background makes transparency obsolete in my case.

why is this happening?
is there a workaround? (like really fast live rendering without noise that doesn't look too bad?)

It won't work. Your technique has a fundamental problem that I'll explain below, but even if your technique was correct, some limitations of Blender's viewport will make impossible to produce the correct result.

Why the method you used wont work:

You say you used pre-rendered PNGs as source, and that's the problem.

PNGs use unassociated (often called "straight" alpha), which is inappropriate for compositing light effects. The explanation is rather simple: A lighting effect, such as fire, electricity arcs, laser beams, etc.) is a purely emissive phenomenom, so itt's basically an addition (the light source adds luminosity but doesn't occlude any of the background).

When you use an unassociated alpha image (like your PNGs) every pixel with alpha > 0 will occlude the light coming from the background. The phenomenom you're trying to reproduce shouldn't occlude any light from the background, so its alpha has to be 0.

But in unassociated alpha images, there is no RGB information where alpha is equal to zero, as that information is discarded by the alpha over operation for unassociated. What you need is an associated image (often called "premultiplied), that lets you have RGB where alpha is equal to zero for this kind of effects, that need pixels that are luminous but don't occlude the background at all.

For that reason, PNG won't cut it.

Why it won't work anyway:

Blender's viewport, and to some extent cycles have some limitations regarding alpha manipulation. The materials view does some funny things flipping between associated and unassociated alpha, which results in RGB with alpha zero being lost before it gets to your screen So, even if you try to produce the right shader with cycles (which could work in the compositor), the material view will kill it. Your best bet is cycles with a good GPU that can keep up the pace needed for realtime preview.

Since the phenomenom is purely emissive, you need an emit shader which is extremely fast to render, and the good news is that you need a few samples to get it rendered. Noise shouldn't be a problem (just use 8 for start resolution and one sample for preview, it will be fast and noise free).

The bad news is that cycles has some problems producing a proper output from a shader constructed with an alpha-driven mix where pixels have to be luminous, so you can connect the nodes in cycles to produce a luminous premultiplied image, but it won't render correctly.

Not everything is lost: If your ligthing effects are purely emissive and you don't need any occlusion (which means, all your alpha will be zero), you can create the effect with cycles.

First you have to create an emission shader using the ligthing effects rendered on black background as texture, then you need to ADD that shader to a transparent shader using the add shader node. The output will work in the cycles render view and it will be fast.

It won't work in the materials view, though. It will render white.

This answer may help just for reference purposes, but all of it's contents may not be accurate. So read on if you want.

That is just an illusion created by light. It looks like there's less light because darker colors appear less saturated than lighter colors. That is why it looks like the color is drained.

The reason your solution works is also quite simple. The Blender viewport does not render accurately. If you change the transparency color to black, then press render, it will not be transparent at all. The transparent parts will be black.

This means that when there is part transparency in the viewport, Blender calculates whether it should be transparent, and because of the black color, decides it shouldn't. This makes the color appear in full again, because the transparency was fading out, not the color. Therefor, if the color is set to black, in the viewport it will appear the same over black and white, but rendered, it will not.

You will still have transparency in parts of you image, but no matter what surface it's on, it will look the same, because it is surrounded by a black outline (even on a white surface), and does not fade out, leaving full saturation color.

I hope you understood that, but I sounded a little confusing, so below are some illustrations.

On top, we see how a white or black background can change the appearance of colors (which is explained by many reasons), and on the bottom, we see a comparison of a Blender viewport render when transparency is set to black, compared to white. Note that in the first image, it is all eye illusion, and all rendering an colors are correct. In the second image, note how the edges of transparency don't appear transparent, but black. 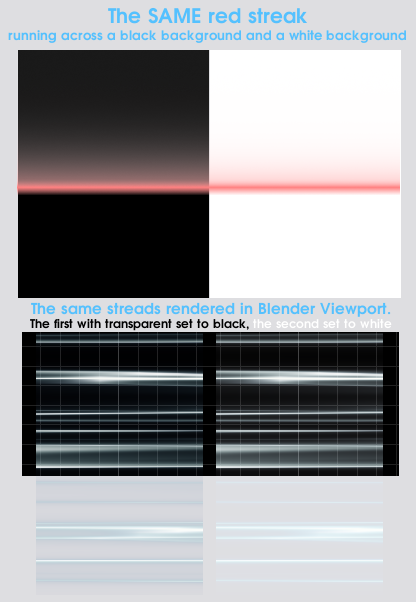 Hope this makes sense. Thanks.

Maybe this solution is also interesting for you: As others pointed it's difficult to compose transparency in the 3D OpenGl viewport. So why not split your two elements in two scenes and composit them together with light-add-mode in blenders video sequence editor? VSE even plays back in realtime when in OpenGL-Preview Mode. 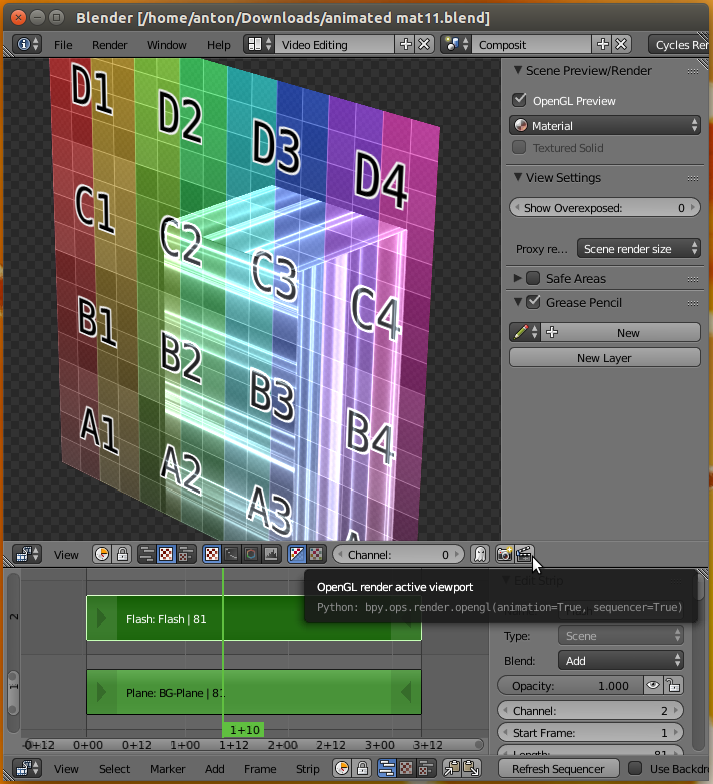 So here is how to do it:

So maybe this helps! Cheers, Anton

If anyone has the same problem:
-> set the color of the transparency shader node from white to black !!

Not the answer you're looking for? Browse other questions tagged 3d-view transparency color or ask your own question.

2
Texture Painting Transparent
1
Alpha rendering with White background
1
How to turn off transparency on mesh, cycles render
1
How do I get the material's base color alpha work as transparency in the shader?
2
Transparent BSDF cause noise in depth layer
1
Black lines around alpha cutoff in Cycles?
0
Why is the color ramp in the compositor treating my transparent pixels as black?