What's the difference between the various Open Subdiv compute types?

It seems there are 5 different available "compute types". what are these compute types? What's the difference between them? 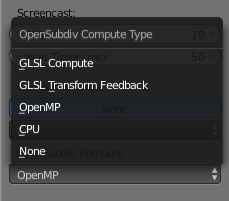 The difference relies in in which device the actual calculations are done. CPU and OpenMP are run on the CPU, while GLSL Transform Feedback and GLSL Compute are run on the GPU.

From the wiki r (archived version).

Not the answer you're looking for? Browse other questions tagged customization performance subdivision-surface or ask your own question.

9
Performance of mixing colors vs mixing colored shaders
0
A character made of cubes? Is it bad for gaming?
4
Difference between subdivide smooth and multiresolution?
0
The difference of subdivision surface modifier between 2.7x & 2.80?
1
How setup Cycles Compute Device in console
3
What's the difference between the Subdivision Surface modifier and the edit mode->RMB->Subdivide option?