Any way to create a 360 stereoscopic video for playback in VR?

I have search the web for a solution to my problem, but most of the solutions out there seem to be created for a "fixed" view-angle.. For instance: http://www.dalaifelinto.com/?p=1009

That would only create a "flat" movie with depth.. but what If I actually want to create a spherical 360 stereoscopic top-down(or side by side) video for playback in VR?

Simply using the above solution and turning on Panoramic->Equirectangular wouldn't do it.. since after all.. the cameras(left and right-eye) has to rotate around the center of the cameras/eyes..

As you might notice.. the problem with only using a Equirectangular is that as soon as the user turns his/her head to any other direction than the direction the cameras was pointing to.. the stereoscopic-effect will "break".. or you will end up with a "cross eye"-effect..

Any ideas of how to solve this.. any tutorials around that you are aware of?

Starting from Blender 2.78, there will be a 'Spherical Stereo' checkbox in the camera panel which does exactly what Sybren has described. It will pivot the stereo camera per pixel to give you always the correct stereo offset for any direction. 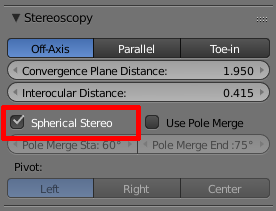 As far as I know, what you suggest, rotating the camera pair in small steps and stitch them together, is exactly what Blender's Multiview feature does. It doesn't need explicit stitching, as it effectively rotates the camera pair for every rendered pixel.

You can find more info in the Multiview section of the Blender manual. The Camninandes VR demo also doesn't have any issues on the left/right/rear.

This is a really hard problem that nobody has fully solved.

Here's the issue: Cleanly stitching together a panorama relies on a single-viewpoint constraint. But with two cameras, it's geometrically impossible to rotate them around, keeping them side by side while maintaining that constraint. A full solution would require either separate video for every possible viewing angle, or some sort of real-time re-projection based on saved 3D information.

Various compromises are possible. For example, Google has made a really interesting attempt based on data from their Jump camera rig. Their trick is to treat parallax as a fixed angular shift as a function of distance. This approach is imperfect at the edges of the display, or when looking up or down, but it's not a bad approximation.

If you're happy with Google's approach, you may be able to render to the same format that their rig records (by using multiple cameras in your scene), and submit the videos to Google for post-processing.

One approach you might try with Blender is to render your video in several concentric spherical shells by setting the near and far clipping distances, and rendering with transparency. You would then need to create a viewer that superimposes the shells, rotated different amounts in the direction of eye separation, to simulate parallax.

The method in the link you gave actually does render fully stereoscopic 360 panoramas. You get an output of two 360 images as you can see in the third image in your link, one for each eye, and it works in all directions. I've tested this in Google Cardboard.

Here is the official documentation: https://www.blender.org/manual/render/workflows/multiview.html

Here is a GIF of an image pair I rendered as a test. You can clearly see there is a left, right image offset over the full panorama.

255
Can Blender render pngs with the background transparent?
32
How do I increase the render distance?
0
3D 360 VR Image seems off

60
Creating a Black Hole in Blender
6
Any way to keep the kind of ilumination on preview for rendering?
5
How do I render a Panorama-tracker stabilized 360° video?
6
4 way video for pyramidal hologram
1
Whats the best way to render a 360 video in blender?
4
Rendering a stereoscopic image in Blender 2.77
0
Alpha Transparency Lightening and Volume Scatter
2
Combining Black and White with Color Rendering
1
Any way to get a multilayer video?