Ignore the netfabb program. I wanted to use it to show what I was trying to do in blender. My printer can not fit the whole print so I wanted to print in sections using a "pin" method so it fits right.

What ideas would you guys have to separate the sections? I was thinking a square pin on one side and a square hole on the other? I bet there are better ways also that you know of.

I don't know how to do this and could use a walkthrough! 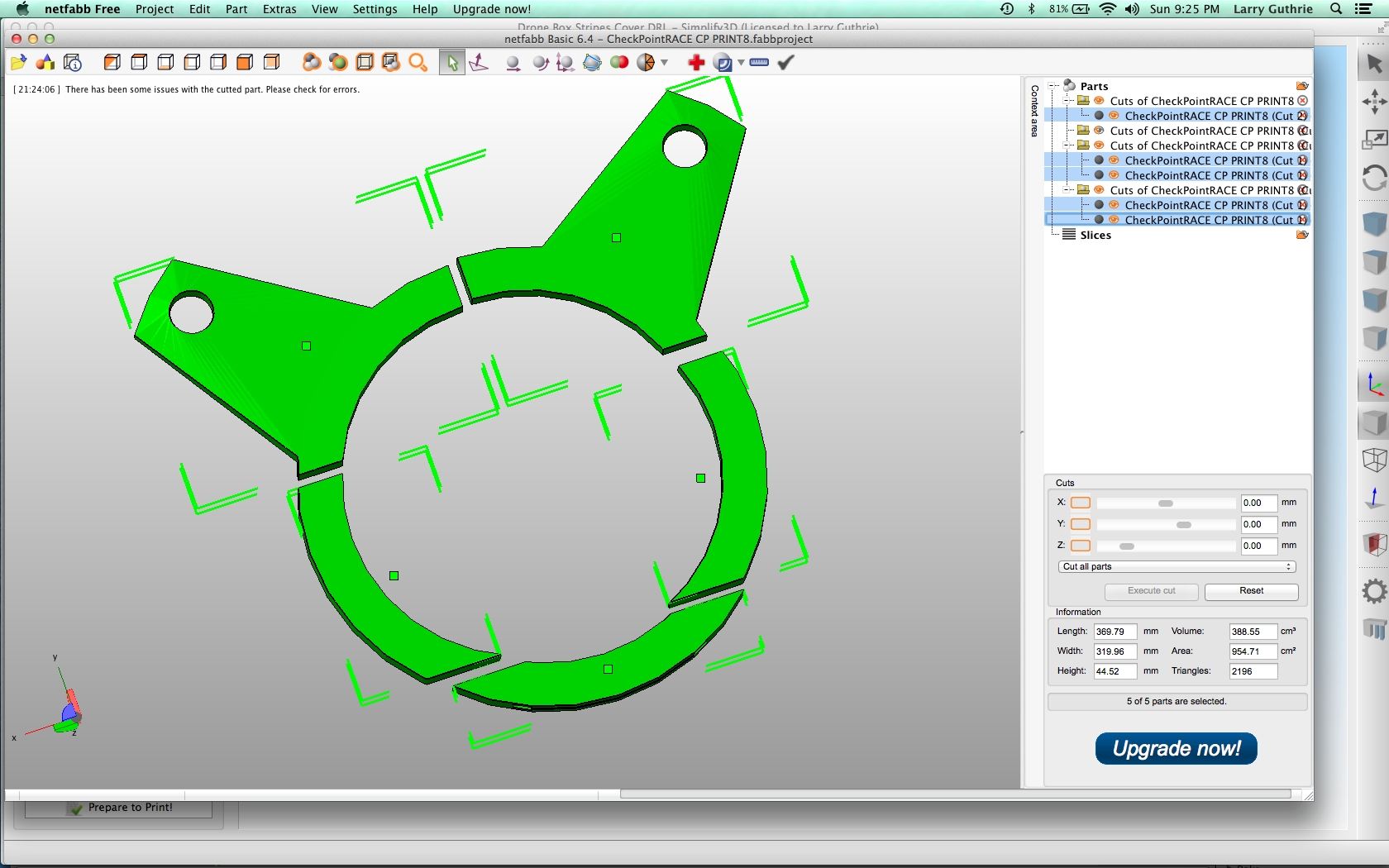 Ok guys... I figured this one out on my own so I wanted to post how I did it just in case someone had the same issue. 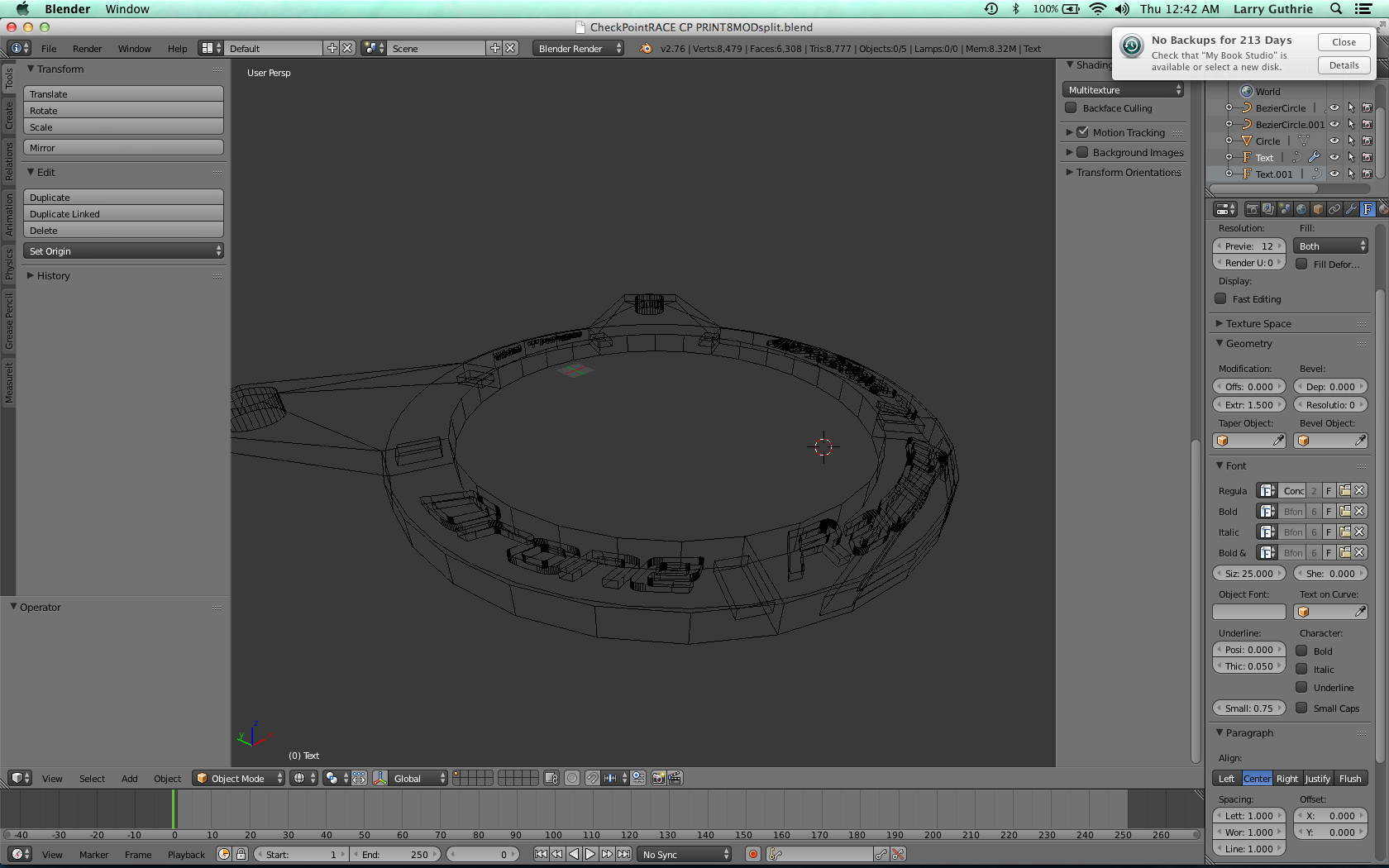 First thing I did was select vertices inside the the structure and created a face. I then created an inset and then extruded it outward. 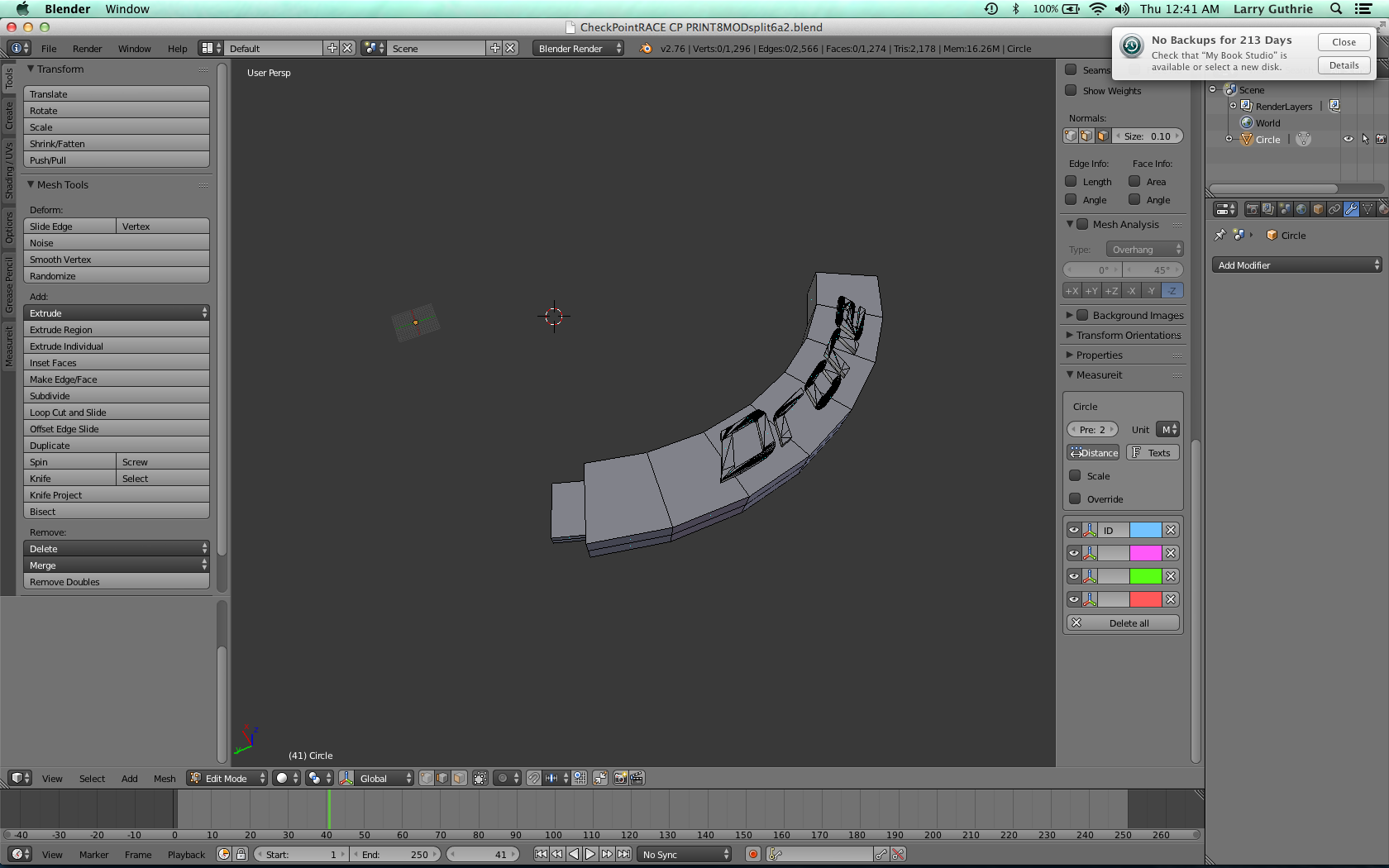 I then made sure they were solid and converted them to a stl file and put them into simplify 3d and am printing now with supports in all the holes. Almost finished and it looks pretty good! 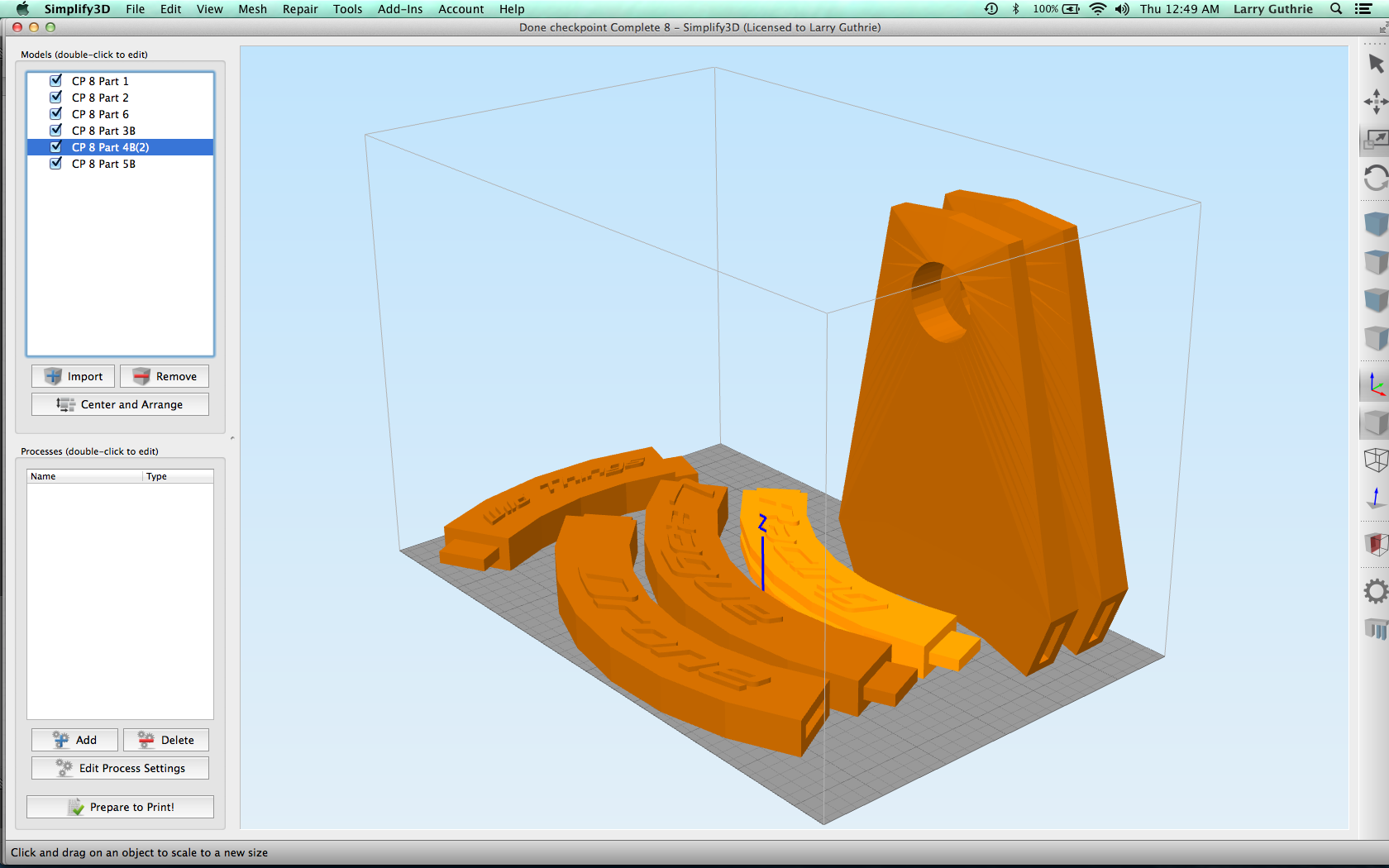 Answering the second question first, yes, you could keep all of the component parts in a single file. But depending upon the printer driver software you intend to use to print your creation, you may have to export the various parts out individually to separate files for printing purposes.

Looking at your blend file, and your question, your proposed 3D object will not print very well on the 3D printing systems I am familiar with, if subdivided according to the illustration in your question.

The first challenge I see is your stated proposal to use a "square pin ... and square hole". Depending upon how you intend to orient the pins and holes, I see this as a potential challenge because 3D printers do not print horizontal "square holes" well. You'll need a different method--or methods-- of joinery.

The second challenge I see in the ~.blend file I downloaded is the slot in the ring opposite the two "ears". The slot is a "hole", which again, cannot be produced on a 3D printer.

The third challenge is in the shape of the ears. The 3D printers with which I have slight familiarity require a flat surface on which to form the object to be printed; they can't print an overhang.

In the absence of information on the intended size, this image 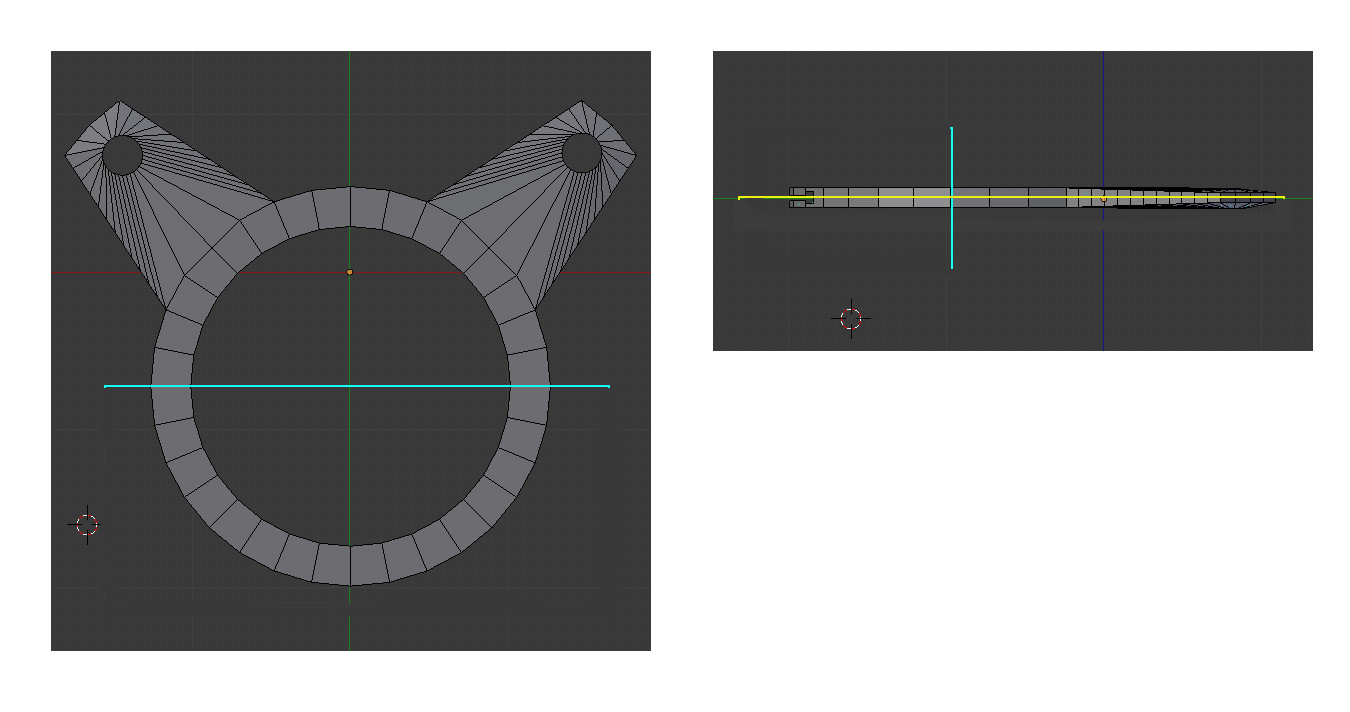 Not the answer you're looking for? Browse other questions tagged modeling 3d-printing or ask your own question.

3
How to design a part to fit exactly onto an existing 3D model?
0
Stl Files and Adding Bases
0
How can i make Blender export multiple meshes with PLY/STL format for printing in 3D?
2
Creating model of disc with offset hole for 3D printing
0
Too big (in memory size) STL exports
0
Separate stl into two stl's based on size of chunks-for 3d printing
0
Can't thicken parts, slicers don't recognize said parts
0
3D printer not printing anything