How-To: Text Sliding out of a Circle 2D

I will be explaining this as best as I can, however I will be actively updating with more detail if necessary.

Question: How can I get text to extend in such a way? I know that this is harder because the text has to appear out of thin air as opposed to sliding from off-screen. What is the best way to do this?

Second Question: If possible, can I import a pre-made circular 2D logo into Blender to use as the circle? I already know that making the roll motion is just a matter of repeatedly rotating it 90 degrees and using animation keys (may not be correct term, but I know how to do that part).

Here is a quick method for that: 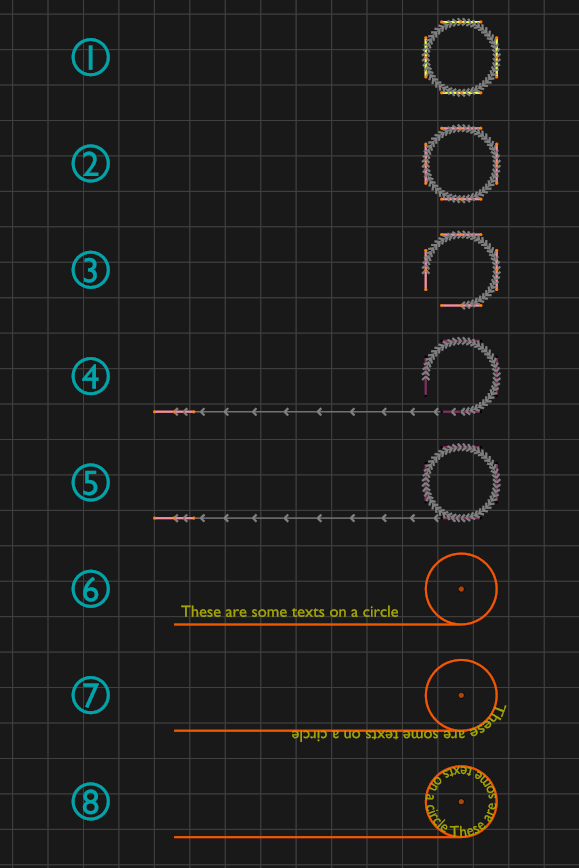 Finally, you can key the movement for path object to get the result:

I believe this is the sort of effect you are looking for, right?

Though there are several possible methods of doing this, I would probably use this method with some Cycles node tricks.

First set up your scene. You will need a text object for the text to be revealed and a disc placed directly in front of the text and animated to move and rotate from left to right (or vice versa). Something like this:

To test the location of the disc in the text material I will use the disc's local coordinates. However, since the disc is rotating as it rolls its coordinate space will be too. To fix this add an empty and parent it to the disc. Then, in the Constraints properties panel for the empty, add a Limit Rotation constraint to the empty and check all three limits X, Y, and Z (leaving all the Min and Max values at 0). 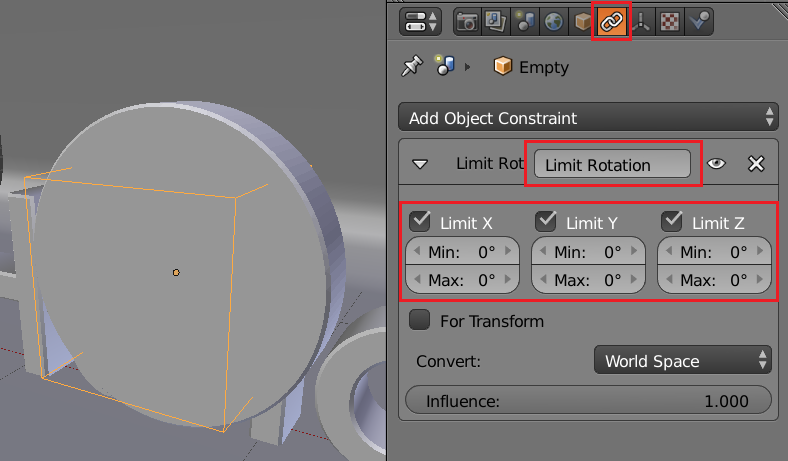 Now you need to set up the material for the text. To sample the empty's location use the Object output from a Texture Coordinate node and select the empty in the Object selector box. Split out the X component with a Separate XYZ node to test if it is greater than 0 (meaning that this part of the text is to the right of the disc/empty) and plug that into a Mix Shader with a Transparent shader in the bottom input.

Image below. Text is placed on a single yellow curve which has a circular portion and a tail. The tail is very small for this image, it is indicated with the yellow arrow. The curve has two shape keys. A basis with a long tail. A Key 1 with a short tail. The Shape Key Value [Influence] is animated with keyframes to dynamically change the curve. 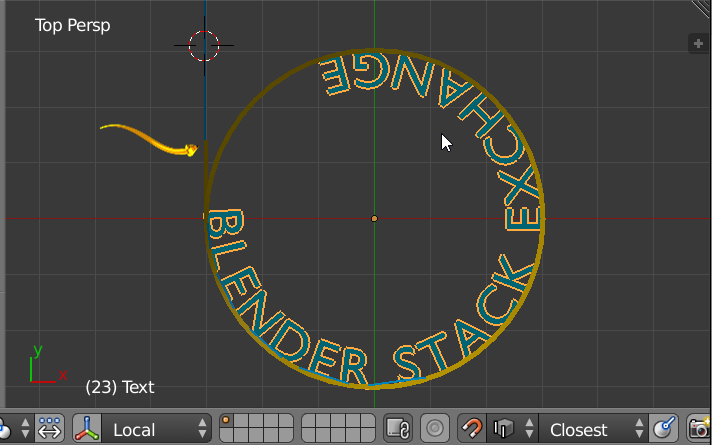 Image below. You can see the curve shape is animated so that some of the text is placed on flat portion of curve and some is placed on circular portion. 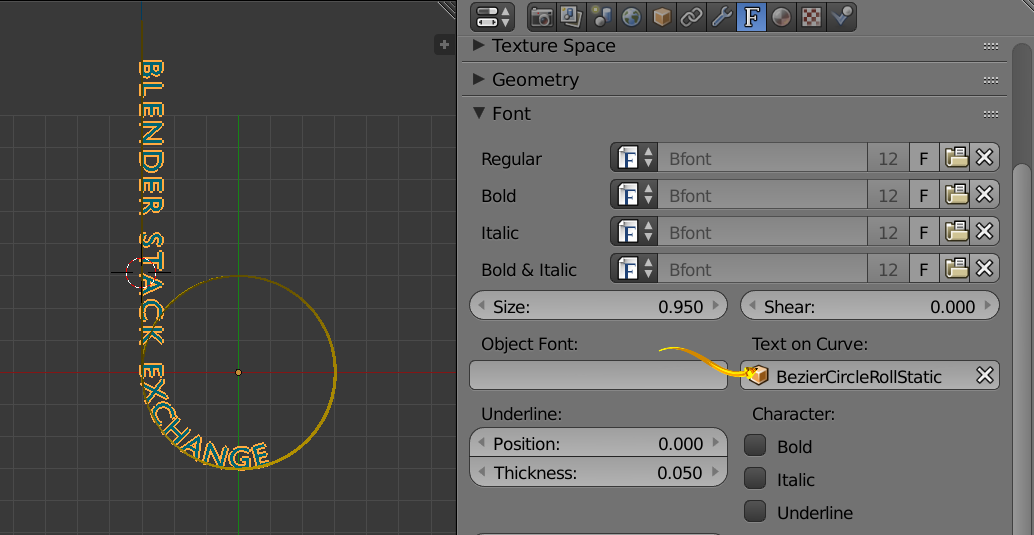 Image below. The curve has two shape keys. Here is the long tail on circle shape key basis. Its often difficult to see long skinny hair lines in explanations. The grid is present in the image to give sense of scale. Key 1 value 0. 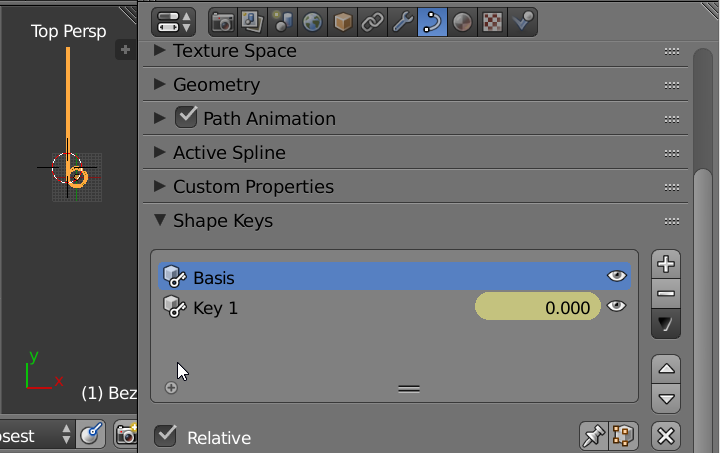 Image below. The Key Value 1 has value near 1. The the resulting curve is closer to just a circle. Just a little tail. 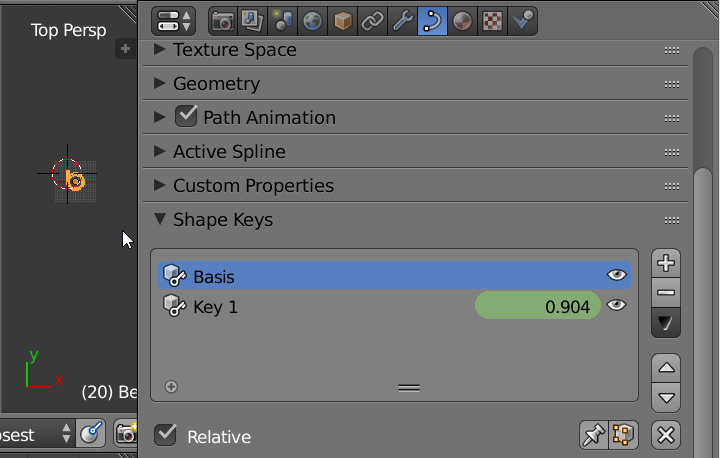 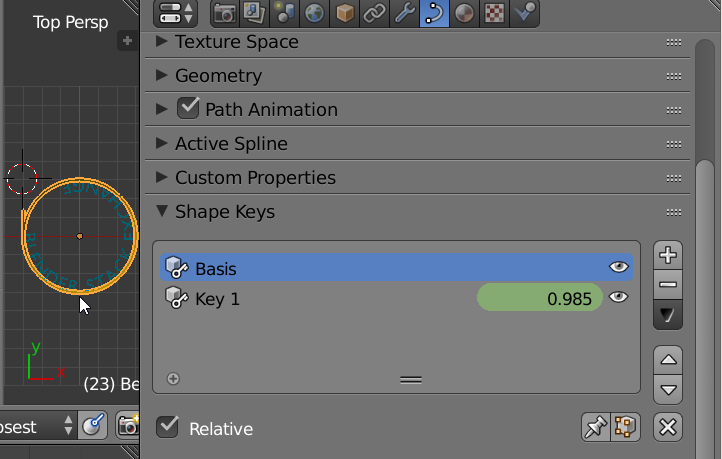 The goal here is to place text on a curve efficiently. Curve direction can be changed. Text is left justified. Some text [spaces] are added before the visible characters to ease the transition between text on flat part of curve and text on circular part of curve. The curve is treated differently than the concept of Blender [parent/child]. If you rotate the curve it will have no effect on the text. To achieve rotation animation, rotate the text object.

To create the curve start with a Bezier Circle. [Cyclic U] set to false since we want circular shape with tail. Add a new vertex to complete circle and then added tail vertex. 5 on curve vertices.

Image below. Where the tail meets the circle please reduce the handle lengths to ease visual manageability. 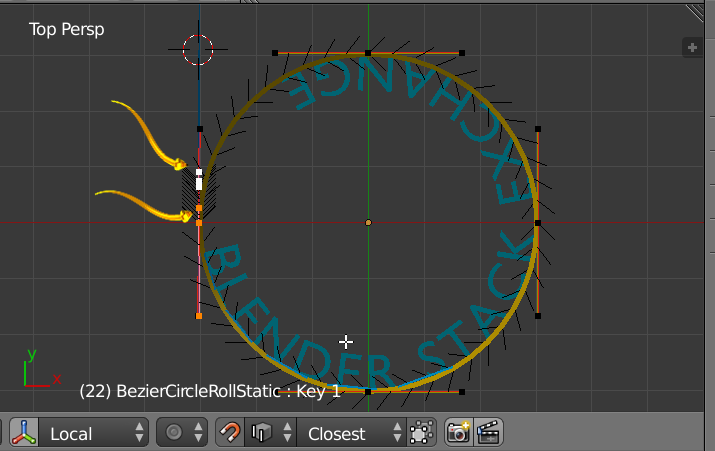 Not the answer you're looking for? Browse other questions tagged animation objects text-object or ask your own question.

21
What is an empty?
1
Align text on the inside of a circle
0
Characters Move Independently In Single Text Object

3
Render subsection, produce full resolution image
0
How to make text fade in and out
10
How do I select and change a text?
9
Wrap text around a Circle without deforming it. (numbers on clock)
1
Align text on the inside of a circle
15
How do I wrap text around a circle having it still standing up?
0
Best approach for a random terrain rolling ball animation?