For the purpose of animating materials, is there a way to construct a sine wave function out of Math nodes?

A while back I asked about how to do something similar with scripted driver expressions. But drivers don't work for animating materials (yet). They also are not currently supported in Blend4Web, which is where this will ultimately be used (with the B4W_TIME node driving the incremented value by frame).

So let's start with a keyframed Value node that increments by 1 for each frame. And that is factoring a MixRGB node with two mixed colors. 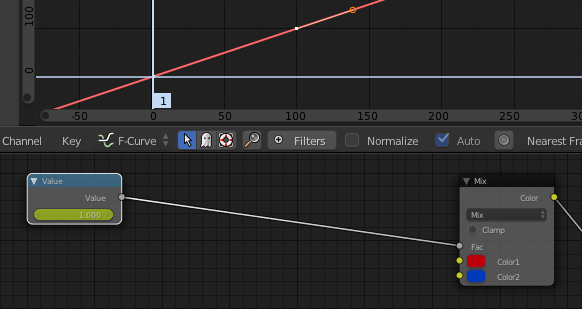 Since 0 will be 100% the top color, and 1 will be 100% the bottom color, going from frame 0 to frame 1 instantly changes the mix completely. Inserting a Math (Multiply) node slows this process, so for example if multiplied by 0.05 it will take 20 frames to shift from red to blue, and at frame 10 it will be half/half (purple).

So what about animating it so that it oscillates between two colors? Can this sort of sine wave animation be constructed using Math nodes?

(Note: This must be achievable using the Blender Internal Render Engine.)

Producing a sine wave is easy as Sine is one of the math functions in the Blender Internal Converter --> Math node.

However, a normal sine is no good as a direct factor for a mix node, since a sine wave produces values between -1 and 1, and the node expects a value between 0-1. To produce sine-like oscillating values between 0 and 1 I used the equation ( sin(x) + 1 ) / 2.

The factor values produced by this node setup look like this (green line):

A square wave is also pretty easy, since we only need to discern between positive and negative values, which we can do using the "Greater Than" or "Less Than" nodes: 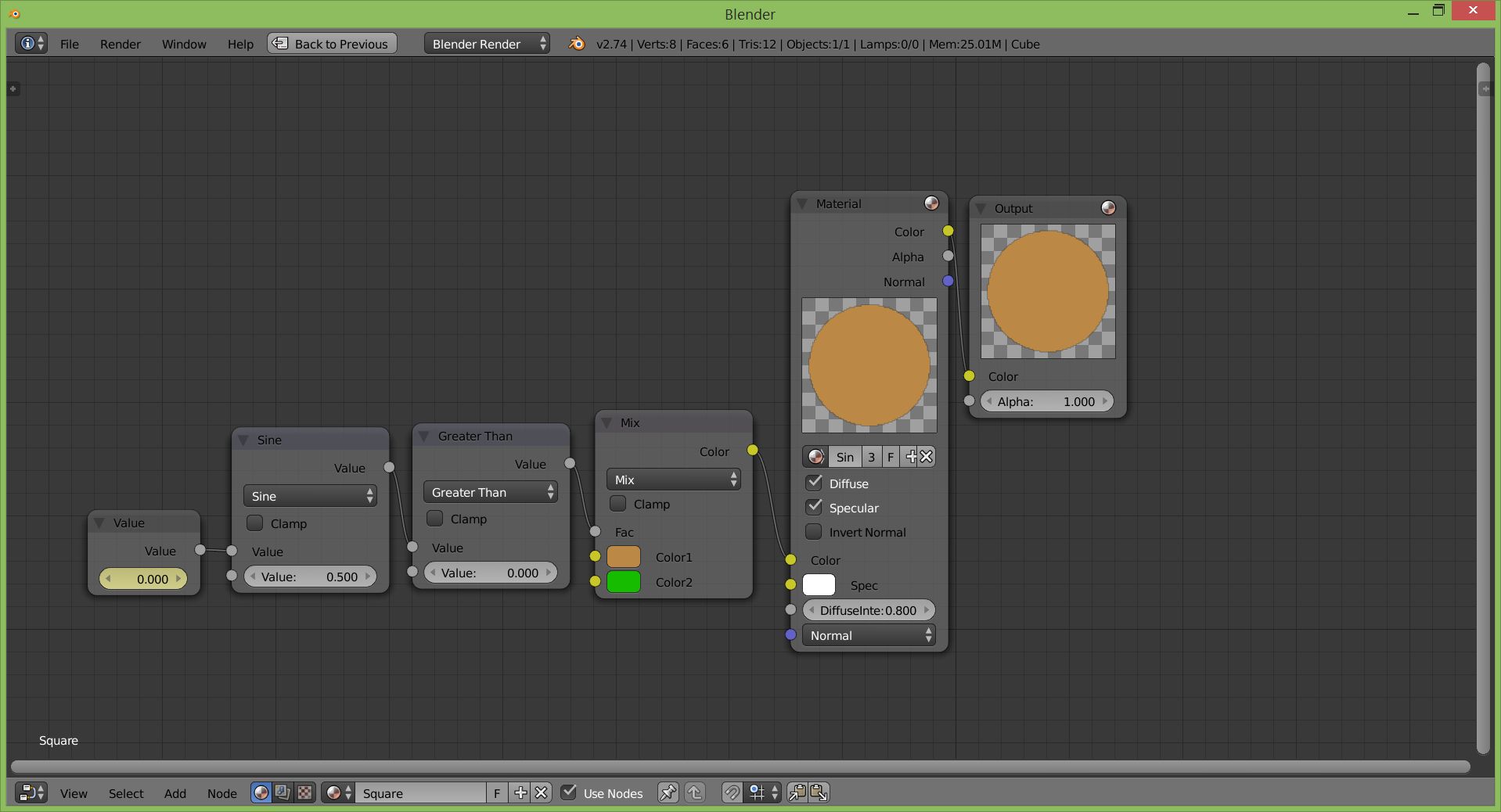 And the factor values:

Based on this algorithm as implemented in wolfram, I used the following equation to generate a triangle wave: pi/2 * asin( sin(pi * x) ) 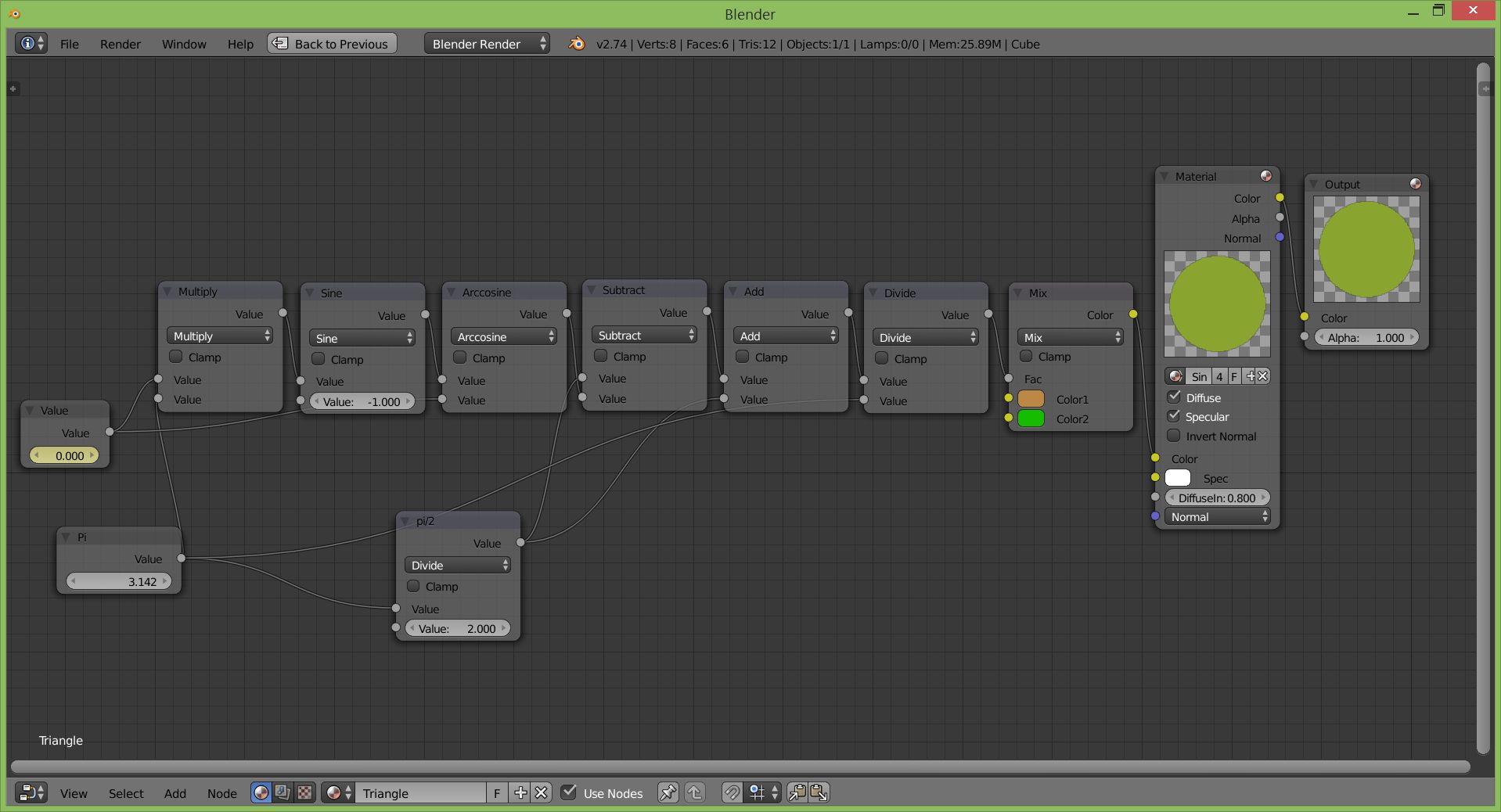 This is by far the ugliest and biggest node setup, but that's the best I could manage. Here's how the factor values look:

Not the answer you're looking for? Browse other questions tagged node-editor blender-internal-render-engine mathematics blend4web or ask your own question.

8
Sine wave function as an input value?
0
How to create Sine "Pulse" with math nodes and "From/To" inputs Amplitude?

10
Global Variable/Node across multiple materials?
2
How can I prepare a set of colors that should go together, and be able to apply them to different objects with a single click?
0
Make sine wave around a circle?
0
Math in Texture Nodes
0
Mathematics behind creating shapes using math nodes
7
Sine wave on the environment texture
5
How to avoid violating energy conservation when making shaders and node groups?
2
Math Sine Node not working as expected?
0
How to create Sine "Pulse" with math nodes and "From/To" inputs Amplitude?
5
Using math nodes to create geometry in geometry nodes