How to change the alpha blend amount with sideways transition?

I have this graphic in an answer in another SE site:

It has been produced in Inkscape, and I can easily make various parts into separate PNG files (by using layers).

My objective is to make an animated GIF (or movie) where the opacity of the blue line which goes from Tx to Rx moves sideways over a couple of seconds, to indicate the data movement.

Thus, holding the rest of the image unchanged, the blue line (the one with the arrows) might start at 50% opacity, and smoothly turn to 100% opacity, from left to right.

So far I have the blue line in a separate PNG file, and the rest of the image in another one.

I made a mask, and keyframed its shape so that it gradually covers the area occupied by the area. But now I'm stuck.

I can't put it all together to get the effect I described.

So far I have this in the Video Editing layout: 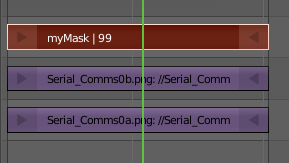 I've also tried various things in the Compositor without any real success.

Is there a simple and easy way of achieving this?

Browse other questions tagged keyframes masking blend-modes or ask your own question.

4
Mix shaders with blend modes besides Add and Mix?
3
Limiting the amount of frames a mask is active
0
How to tween the alpha channel (visibility) of an object?
1
How do I use a map or node as a mask?
2
How to blend/mask materials?
0
Image Transparency doesn't work with alpha mode and alpha blend in both eevee and cycles